Giveaway and Review: Take Me by T.A. Grey 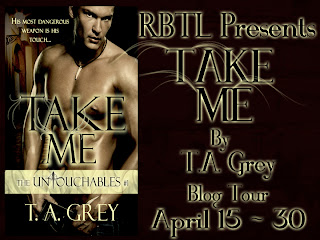 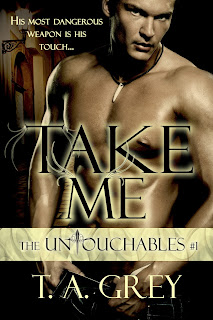 I love to write the kind of stories that will keep you up late at night and make your heart pound. It’s my goal in writing to make each new book better, more exciting, more action-packed, not only to test myself as a writer but to keep thrilling you. I’m always trying to push the boundaries with my imagination, and yours, to create something new and different.

Visit my website to learn more about me and my books at www.tagrey.com

It took even less time than she would have expected to see regret flash across his face. That alone made her flinch like she’d taken a punch to the gut. His head jerked towards the front of the house at the sound of high heels coming their way.

“You know how I feel, Felicity. God damn it!” As if that made any of this better. As if that erased her shame or changed anything.

He pulled his pants up and with a little adjusting managed to make his suit look neatly pressed as if he’d just put it on. Even his hair looked freshly combed and smooth, not a single hair out of place. She had no doubt how she looked though—like she’d just been fucked against a door.

He knew where this would lead them, how this would hurt her. Yet he did it anyway, he touched her. A tear she couldn’t contain slid down her cheek. He wiped it away with his thumb, his face softening.

She couldn’t stand the endearment. Not now, not when her whole heart was breaking.
The footsteps came closer for which she thanked the stars. It helped her to get her bearings and move, no easy feat after feeling him inside her body for the first time.

“Don’t ever touch me again,” she said, not meeting his eyes. She meant it and she knew he heard the conviction in her voice. He’d never touch her again after that. She was done.

Quickly, she slipped in the garage door. She knew she should flee but some sickness inside her made her pause outside the door. She stayed silent and listened.

“Ah, there you are. I didn’t know if you were here yet,” a warm, feminine voice said.

“Julianna, it’s good to see you.” She could hear the smile in Dom’s voice and knew it was forced. The sound of kissing was like a lethal blow to her heart. She staggered back a step as her heart stopped beating for one agonizing moment. She’d bet money that Julianna didn’t know that his smile was forced, the kiss not real.
She probably didn’t know anything about him and, if she did, it didn’t matter because no one loved Dom like she did. No one. Not even his Julianna, the woman he was to mate with—his bruid.

Another tear slid down her cheek. She wanted to sob but first she had to escape. She could never be around Dom again; no matter how much she loved him or what he promised. Yet, a part of her knew the thought was fruitless. He would never leave her alone now. He’d find her. He wouldn’t give up on her. It was in his nature.

But he didn’t love her.

And he was mating with another woman.

AHH!!  What a tangled web we weave!!  I've enjoyed another on of T.A.'s fabulous books.  This girl knows how to write a flawed alpha male who steals your heart every time!!  Dom and Felicity are truly opposite and met under the worst of circumstances, considering Dom is promised to another.  But yet the sparks fly!!  Neither one can resist each other and lies start piling up.  Is there a chance for true love to win?

If you have read a TA book, then you know the answer to that question.  This was a great read, filled with lots of twists and turns throughout the story.  You definitely stumble through an array of emotions throughout the read, especially surrounding Dom. You love him...you hate him...you want to slap him...then you just flat out WANT him...lol.  I throughly enjoyed the read and can't wait for more from this author!!

There is a tour-wide giveaway associated  with this stop!!  Fill out the rafflecopter for your chance to win!!!
a Rafflecopter giveaway

sounds interesting, thanks for the excerpt :)

I've heard some good things bout TA's books. going to have to check them out.

thanks for sharing
sharonda

Sending some love your way. I have read TA's books and they are fantastic.
debby236 at gmail dot com

Sending love your way!
Thanks for the giveaway!

woot woot! happy day 3 on the book tour! dominic is the bomb and can't wait for grayson! love you t.a.!

Thank you so much for having me on your blog today! I am so thrilled that you loved the book. :)

I love the excerpt and have heard this author is really fantastic. I love the giveaways on this site so thank you for entering me for this chance to win. sdylion(at)gmail(dot)com

I cant wait to read this book and thank you for excerpt and the giveaway!!!!

Thanks for the awesome giveaway. I would love to read this book. It sounds really good. Please enter me in contest. Tore923@aol.com

With a cover like this I'll follow this tour anywhere it went ;) Good luck on the book's success!

Love the cover and excerpt. Can't wait to read. Thanks for the giveaway.

Thank you for introducing me to another great writer.

Thank you for this amazing giveaway! and great excerpt! Def. have to read it! :)
-Amber
goodblinknpark(AT)yahoo(DOT)com

Loved the excerpt! And what an awesome giveaway. Congrats on the book release. I haven't read any of these TAs yet & it looks like I've been missing out. Adding to my TBRs right after I leave my comment.

Sounds like a very good but. Thanks for the giveaway.

Showing my love and appreciation!

Great excerpt, I can't wait to read it!

Thanks so much for the awesome giveaway! Your books sounds incredible!!!

Great excerpt!! Thanks for this amazing giveaway. :)

I love your blog, it's so much fun!
T.A. Grey is an new to me author and I would rally love to read her paranoraml romance, specially if it's her first one in the trilogy! thank you for the great giveaway.
Sending you both some love! Enjoy a beautiful weekend!

I just shared your giveaway on my Facebook page!