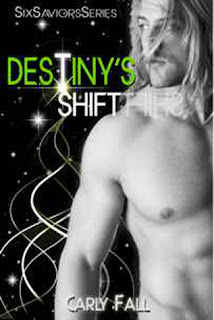 One hundred and fifty years ago, Warrior Jovan of the Six Saviors realized he had a gift: the ability to feel emotions through touch. Over the years, the gift has intensified allowing him to hear others thoughts, and this uncontrolled skill has forced him to keep his distance from both humans and those of his race. He fears the impact on his sanity if he doesn’t.

Liberty, an SR44 female has come to Earth by a set of circumstances beyond her control. Born into a life of servitude on SR44, she is alone, afraid, and stumbling her way through learning the customs and language of her new home on Earth. When Jovan meets Liberty, it becomes clear that they are of the same species, and Jovan takes Liberty under his wing, despite his commitment to himself to limit interaction with others.

As Liberty reveals the reasons for her coming to Earth, it becomes apparent that the Six Saviors are in danger, not only from the FBI, but also from those who have journeyed to Earth with Liberty, and they are seeking revenge. Jovan must quickly learn to control his gift, and Liberty is the only one who can help him. As they deal with danger from all sides, Jovan and Liberty must find a way to compromise on the lives they desire, or they will be forced to go their separate ways.

This was my first experience with the Six Saviors series and with this author, but I can guarantee that it won't be my last.  Even though this isn't the first book in the series, I had no problem following along the with the story.  Each warrior posses a unique skill set or gift that makes them each invaluable to the team.  Jovan's gift has developed over the years and has reached a point where it is slowly driving him mad.  Since each of them posses a different gift, the others have no idea how to help him.  He has been slowly drifting away from the team for years because other people's thoughts and feelings are continuously rattle around in his brain.  Imagine walking into a room full of people and knowing everyone's thoughts and being able to feel their every emotion.  In my opinion it would be pretty intense.  He needed some help and fast or solitude was going to be the only answer.

Liberty is newly arrived on Earth from Jovan's home planet SR44.  They don't have physical forms on their planet, so human bodies are something of an adjustment.  At night their eyes glow their true form's color.  In Liberty's case, her eyes are pink while Jovan's are green.   It's an interesting development that is sure to cause the warriors problems in the long run.  Jovan can sense Liberty is different and is shocked when he discovers not only is she from his planet, but she also shares his gift.  Could she be his last hope at a normal life?

I enjoyed this little glimpse into this author's work.  I highly recommend to all sci-fi romance fans.   It was quite enjoyable and easy to get swept up in.  I would love to read more from this author, especially this series.  They have many obstacles to face and it seems that going home is no longer an option.