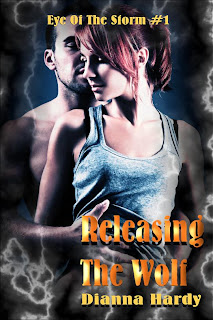 Awaking with an irrepressible need to save her fantasy lover, Lydia decides to humor her dream self and head on over to where she thinks he's imprisoned.

This was an absolutely yummy read!  Dianna has a dark sense of humor and she uses it frequently to torture her characters.  Can you imagine having a sex dream every single night for ten years???  My libido would not only be on overdrive, but I would probably be out of this world grumpy..lol.  Those dreams have to equal: no sleep, especially as hot as they were!!  So Lydia basically becomes introverted and doesn't become close friends with anyone, to include long term relationships.  How can she be committed to another man when they will always be compared to her dream guy? And they will always come up lacking.

So we have 3 hot wolves in this story, one sweet and sensitive, one sexy as all get-out, and then we have the mystery wolf who doesn't truly have a place in the pack.  This is my kind of alpha male.  He carries his power with natural grace and just has you dying to fall down on your knees and submit..oh yeah..Him?  I want to know more about.  This was a great intro but prepare for the ultimate frustration in cliffhangers!!!!  I'm used to this because Dianna's other series left on the edge and had you counting down the days until the next release!  I can't wait for book 2!!