Giveaway and Review of Carpe Noctem by Katie Salidas 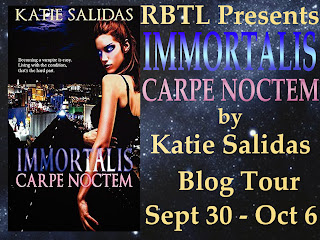 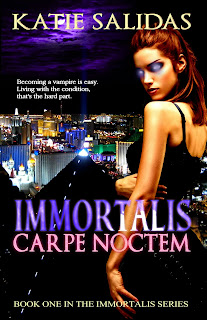 Blurb/Synopsis:
Explore the emotional upheaval that is the transformation from human to vampire. Bleeding to death after brutal mugging on the campus of UNLV, Twenty-five year old Alyssa, is rescued by the cold and aloof, vampire, Lysander. Taking pity on her, he shares the gift-and curse-of immortality. She awakens as a vampire and is soon devastated by harsh realities of her new way of life: An unyielding thirst for blood as well as the loss of her friends, her independence, and her humanity. As if having her humanity stripped away was not enough to make life interesting, Alyssa finds out her "turning," did not go unnoticed by the rest of undead society. Old enemies; an ancient sect of vampire hunters, known as the Acta Sanctorum, as well as a powerful Vampire mistress, each set plans in motion to destroy both Alyssa and Lysander. Only by accepting her new-found immortality, seizing the night, will Alyssa hope to survive. She and Lysander must fight together against two sets of enemies bent on destroying them both. 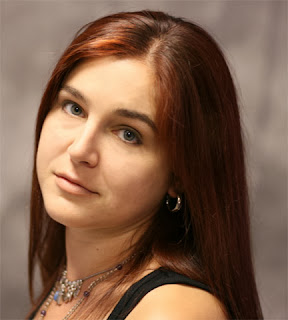 “You are a vampire.”

“You are a vampire, Alyssa,” he said slowly. “An immortal.”

“No! That’s not possible.” I shook my head in disbelief. “Vampires aren’t real. They’re fiction; nothing but stories and myths.”

One of his dark eyebrows rose slightly. He cocked his head to the side. He smirked as his eyes trailed down from my face. “Did you not notice the mark on your neck? Do you not remember drinking my blood?” His fangs showed as he spoke: pure white, sharp little daggers, just a slight bit longer than the rest of his teeth. His voice carried that same arrogance I remembered from when he talked with my attackers.
My mouth hung open. No, this isn’t possible.

Things were still fuzzy in my head, but I did remember the blood, the liquid fire, I had been forced to drink. I’d hoped it had just been some drug-induced dream.

I slumped backwards into the cushions of the couch. His words hit me like a punch to the gut. I stared wide-eyed at the distant wall. This was like some terrible nightmare. I didn’t want to believe what he was telling me, but I knew he was right. There was no other way to explain what had happened to me. No amount of hallucinogenic drugs could have explained how I had survived the attack, why I had these markings, or the sharpness of my own new set of fangs.

“You are immortal,” Lysander said with a casual wave of his hand. “Undead is a silly term mortals use to explain the supernatural things they cannot possibly understand. You are no more dead than you were when you woke up this morning. You are just, for lack of a better word, changed.”

Lysander gave me another toothy grin. His fangs were frightening to look at. The memory of him biting me played over and over in my mind like a video stuck on repeat.

“But you drank my blood.” My hand shot back up to cover the wound on my neck.
“Only enough to allow the transformation.”

He reached out, grabbed my hand, and pulled it from my neck.

“Don’t touch me.” I flinched, annoyed and afraid at his sudden gesture. I tried to pull my hand out of his grip, but he was so much stronger than I was. He pushed my hand to my chest, forcing me to feel the erratic thumping of my heart.

“You see,” he said calmly. “Your heart still beats.”

I let out a breath I didn’t realize I had been holding. “But…how?” I relaxed my hand relaxed under his grip.
“Unlike some of your other organs, your heart is still necessary to keep blood flowing through your body.” Lysander let go of me. “For now, while your body is in transition, it will beat in an accelerated rhythm, but it will eventually slow itself to a more normal pace.”

I was speechless. My mind raced, recalling books and movies, everything I knew about vampire mythology. Bats, stakes, and garlic immediately popped into my mind.

“I must mention that your generation’s ideas of vampires are a bit off.” Lysander spoke with a hint of amusement in his voice. “Many of the popular books and movies about our kind are no more real than children’s fairytales.”

Is he reading my mind? I wondered how he seemed to say just the right thing as I was thinking it. “So, none of the stories are true?”

“Most of the new stories you are probably familiar with are filled with complete nonsense.”
“What about the old ones, like Dracula?”

Lysander sighed. His shoulders slumped. “Dracula is not what I would consider an old story, but yes, a few are based on some truth, however little it may be. There is much that is added to make us seem easier to deal with.” His lip curled into a crooked grin. “Mortals like to think they can hurt us. It helps them sleep at night.”

“So, you’re not afraid of crosses, then?”

Lysander shook his head. “Crosses and other holy relics are nothing more than symbols and decorations. I hardly see why an ornamental cross would stop me from doing anything. Furthermore, I think it’s time for the Christians to come up with a better symbol. One that is a little less… gloomy.”

I chuckled. “Okay, what about garlic?”

He shrugged his shoulders. “What about it?”

His head tilted to the side as the corner of his lip rose up into a teasing grin. “You can try to stab me with a piece of wood, but I doubt it will do much more than aggravate me. We heal quite fast. Perhaps a blade would work better.”

I shuddered, seeing his teeth again as he spoke. Is that how I look now?

“So, knives and swords are bad?”

“Yes. It is much harder to regenerate a severed limb. And if we are separated from our heads, it would be safe to say we would cease to exist.”

I smiled, noting the sarcasm in Lysander’s voice. I could tell he’d had this conversation before. He seemed to be enjoying my round of silly questions.

“Holy water?” I blurted out.

Lysander let out a hearty laugh. “No, you won’t melt into a pile of goo. You can throw most of that nonsense out of the window, Alyssa.”

I giggled, realizing how silly it sounded: melting into a pile of goo after being splashed with water. Maybe this won’t be so bad.

“You see, we immortals are not as ridiculous as Hollywood likes to portray us. Though one thing is true... we do survive off the blood of the living.”

Being turned into a vampire, I'm sure (though not from personal experience lol!!) is a traumatizing affair. Then to have 2 sets of enemies out to get you, well, that's some hard knock after-into-new-life.

Thank you so much for featuring Immortalis Carpe Noctem today!! Hugs

Angela McCallister, author of Bad Mouth and Bad Cop, write of some of my favorite vampires. She has a detailed world with some very sexy but fierce vampires, all worthy of groupies. Thanks for the giveaway. michelle_willms@yahoo.com

I love the Twilight series by Stephenie Meyers, Anne Rice, and the Vampire Diaries. Thanks for the giveaway. Please enter me in contest. Tore923@aol.com

Of course Bram Stokers Dracula is my fav. I also like a series by Donna Ansari, Vampire in the City, that features weres, vamps, and witches. The vamps are dark indeed. Just the way I like them.So many others too.

Vampires stories are some of my favorites! J.R. Wards Black Dagger Brotherhood are probably my favorite vampires and Gabrielle Bisset's Sons of Navarus series. Thanks for the giveaway!

I loved this book and H&P, P.B's.
Katie, your characters are fresh and your books are very entertaining.

I like Lyndsay Sands, Christine Feehan, Angela McCallister, and I know there are more I just can't recall them all at the moment ;)
Thanks

I like Adrian Phoenix's Dante Baptiste and D.B. Reynolds Vampires in America. Your Immortalis series is on my Wish List.

Louis was my first vampire love (Interview With A Vampire), then Jean Claude (Anita Blake series), and then Damon (Ian Somerhalder, now that is too many to list. :D