Day 1 in the Ten days of giveaways!!

Hello!  Welcome to my blog!  I will be giving out 10 different little prize packs for this hop.  I'm so glad you decided to stop by and see what I have to offer! Today's package is the first 3 books in a demon  paranormal series by Jackie Kessler.   This series has 4 books and then a book of short stories linked to it. 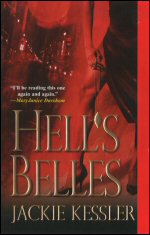 Jezebel’s not your average exotic dancer. For one thing, she’s a 4,000-year-old succubus. For another, she’s on the run from Hell (which isn’t easy to do in high heels). Hiding on the mortal coil as a human doesn’t protect her from muggers, lactose intolerance…or having feelings for Paul Hamilton, a man haunted by his past. Demons are closing in, which is enough to make Jezebel shiver in her G-string. But it’s her love for Paul that’s going to have deadly consequences. (Humans, she laments, really should come with instruction manuals.) 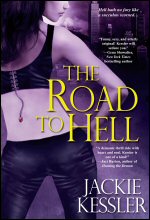 Jesse may no longer be a succubus, but she’s got a Hell of a past. She wants to come clean about her infernal history with Paul Hamilton, her white-knight-in-training lover, except he’d never believe her. Just like some people are worth being (shudder) monogamous for, some secrets are worth keeping. So Jesse keeps mum—until three of her former associates strong-arm her into returning to the Pit. Now, unless Jesse faces off against the King of Hell, she’ll lose Paul’s immortal soul. If she’d known love was this tough, she never would have turned her back on Lust... 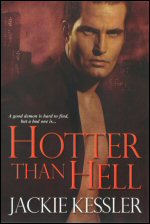 The incubus Daunuan loves his job: seduce a lot of mortals, bring their souls to Hell, party at the best interdimensional pub this side of the Astral Plane. But when the King of Lust makes him an offer he can't refuse, Daun has to give up all the tricks of his trade to properly befriend—and bed—Virginia Reed, a woman who's meant for Heaven.
If he can get her to love him for the incubus he really is, and if he can avoid the rogue demons that are hell-bent on destroying him for reasons unknown, Daun will become the First Principal of Lust, second in line to the King. But Daun learns that love is more than a four-letter word, and that maybe, just maybe, demons really do have feelings after all...
Doesn't this sound like an absolutely yummy read?  I have a thing for demons and I really enjoyed this series!! Must be a follower and leave me a comment with an email address and you are in!
+1 if you follow me on Twitter @Mc_Carver
+1 if you send me a friend request on facebook or goodreads!  Sherri McCarver
Good luck to everyone and don't forget to hop by these other fantastic blogs!!!

This is a great giveaway. Thanks for the opportunity Sherri. I didn't see a widget for GFC but I'm an email subscriber now. I also requested to friend you at Goodreads.Have a Happy Labor Day.
Carol L
Lucky4750 (at) aol (dot) com

This series looks great! I joined as an email subscriber.

Thank you for the chance to win.

Count me in!
I'm following by email and GFC as MJB.
Thanks!
MJB
msmjb65 AT gmail DOT com

GFC Krystal Larson
Goodreads Krystal Carson
twitter Icecream1891 (think I follow...wasn't sure I found the right addy)
fb Lindsay Ann
edysicecreamlover18@gmailDOTcom
Thank you so much for the giveaway!

Thanks so much for the chance!
manning_j2004 at yahoo dot com

What an awesome giveaway. I've been eyeing these books, but just haven't come around to getting them. :)

Jen
GFC follower as Romancing the Book
admin.bookblog AT gmail.com

I hope this hop is open all ten days ('cause I'm so visiting each one!) because this is a great giveaway!

I also tweeted about the hop. Everybody should know about your awesome ten-day giveaway!!! =D

Already following you on Twitter: @sexxyblogger
and I requested you on FB (SharondaLowman) & Goodreads (sexxyblogger)

Thanks for joining the hop.

I would also follow via Goodreads but can't find you...and there isn't a link on your site (I could very well be blind)

Thanks!
mmafsmith at gmail dot com

OMG! I've been wating to read them for so long! They're part of my TBR list =DDDD

I would LOVE to win this giveaway!! I really, really want to read this series! Thanks for an awesome giveaway!

A new author to me but I do enjoy my demon books. Larrisa Ione is the author who made me think outside the box on demons. If I am still in time for it, I would like to included in your giveaway if possible. I am a new follower.
GFC: LadyVampire2u
+1 Twitter: LadyVampire2u
+1 Facebook: Aprille Shadowspeak
(Tried to find you on Goodreads but it wont bring up your name...mine is Lady Vampire on there.)
Thanks!
LadyVampire2u AT gmail DOT com

Very interesting so if it's till open