So, we started with demons...now onto Vampires!  This is for all the Vampire Story lovers out there! I will have 8 more giveaways after this so please keep popping by everyday for your chance to win one of these great little prize packs! Thanks for stopping by!

A typical bachelor party is all about beers and beautiful women. A vampire bachelor party is no different—except the men are drinking Blissky (whiskey-flavored synthetic blood). And no one can throw a party quite like Jack. When you’re the illegitimate son of the legendary Casanova, you know how to have a good time. But when the party gets out of hand and the cops show up, Jack has some explaining to do…if only he wasn’t struck speechless by the beauty of Officer Lara Boucher.
Lara is sure there’s something more than a bachelor party going on. What is Jack hiding? How come no one at the hotel remembers him the next day? Why does he warn her to leave him alone when he’s obviously attracted to her? As a woman, she finds this modern day Casanova hard to resist. As a police officer, she’s determined to uncover his secrets…if she can only get the job done before he seduces her. 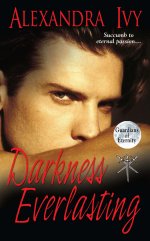 Two men...one desires her love...the other her life...
Darcy Smith always sensed she was different from everyone else--if only she knew how different.  Possessing a secret strong enough to end an entire race of demons, Darcy unwittingly becomes a pawn in an epic battle between the vampires and the Weres as she discovers a new world filled with ecstasy--and dark passions.
Consumed with lust for Darcy, Styx--the Anasso of vampires--will do everything in his powers to keep her out of the lair of Salvatore Giuliani, the deadly leader of the Weres.  But protecting the woman he loves could cost Styx the ultimate price...
Salvatore Giuliani knows time is running out for the Weres.  Pushed to the brink of extinction, he will stop at nothing to make Darcy his ultimate conquest and queen--for she alone holds the key to his survival.
But which of these men can Darcy trust?  For all it takes is one bite to plunge her into a lifetime of servitude--or a lifetime of pleasure.
Succumb to eternal passion.

Both are very yummy reads..On to the giveaway!  One winner will receive both books!  You must be a follower and leave your email address in the comment section!
+1 for following on twitter @Mc_Carver
+1 for a friend request on facebook or goodreads to Sherri McCarver
Good Luck and remember to stop by the rest of the hop stops :)

I would love to enter to win - I'm following on GFC as Teeny104, Pamela Roach on FB, Goodreads and Twitter :)

Many thanks, and keeping everything crossed! :)

So are all 10 days going to be different groups (ie. werewolf or shapshifter?)

What a great giveaway thank you so much!
Im a GFC follower/latishajean
Twitter/latishajean
facebook/latisha D
tishajean@ charter.net

Oh Yeah! Please enter me. Thank you for the chance to win.

Do we need to enter everyday? Cause I'm there. ^_^

Both books look awesome. Thanks for participating in this fun hop.

Thanks for offering such a fantastic giveaway. I love all things paranormal. First demons. Now vampires. Can't wait to see what's next!

Thanks for this giveaway! I just started reading Kerrelyn Sparks.

I would love to read this series! It looks terrific, and definitely like something I would enjoy reading :)
GFC follower: Julie Witt
Twitter follower: @jwitt33
Goodreads friend request sent: Julie Witt

Another two awesome books. I've read Sparks before but I have yet to read Ivy's books. If I am still in time for it, I would like to included in your giveaway if possible. I am a new follower.
GFC: LadyVampire2u
+1 Twitter: LadyVampire2u
+1 Facebook: Aprille Shadowspeak
(Tried to find you on Goodreads but it wont bring up your name...mine is Lady Vampire on there.)
Thanks!
LadyVampire2u AT gmail DOT com