Up A Dry Creek By: Avery Flynn 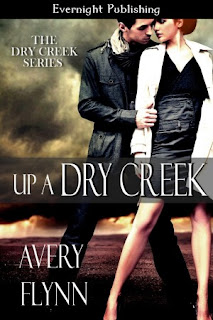 Claire Layton expects the usual busy Saturday night at Harvest Bistro to be killer on her stiletto shod feet. She never imagines there’d be an actual murderer on the loose at her restaurant in rural Dry Creek, Nebraska. But when she discovers a customer dead in a dumpster, the killer demands she find the victim’s phone and flash drive or face fatal consequences.

Jake Warrick, a cocky and mind-numbingly hot private investigator, becomes Claire’s unlikely ally in the search. Jake just wants to solve the case and get out of this hick town, but the diminutive and curvaceous Claire turns his plan upside down as they uncover a more complex crime than they ever imagined. The two bicker and banter like Tracy and Hepburn caught in a whirlwind of intense sexual attraction as they try to find the killer before it’s too late.

Claire had everything she could possibly want, minus some cooking skills.  She'd always dreamed of being a chef but sadly possessed the skill of burning water.  So she went after the next best thing,  managing.  She went to school, got her MBA, got her experience, and opened a wonderful restaurant back in her hometown.  Forget the fact that she ended up back in her hometown because of a classical mistake in love. She would just have to be content with her restaurant.  But, even in a quiet little town where the biggest crime committed was toilet papering the mayors house, simple things can turn your life upside down.  Simple things like taking out the trash.  That's a normal everyday thing that turns extraordinary when Claire discovers a dead body in her dumpster.  But even a murder and triple threat from a vicious killer are nothing compared to the way Jake knocks her down.
Jake was doing a favor for his fathers biggest client.  A simple job that should be over in less than 24 hours.  Just go down there and make sure everything was in order surrounding the murder and that no one screwed anything up.  Simple, until Jake butts up against the sexy restaurant owner.  Claire has him jumping without asking and questioning his sanity.  But how far will he go when his own intentions are compromised and its his family on the line?
This was a great read!  It had it all!  Murder, Lust, Love, Heartbreak, and Mystery!  It sucked me in from the moment I picked it up and wouldn't release me until I finished.  Jake and Claire are perfectly matched and but heads throughout the novel, and other things a well :).  This book heats up several times and has you fanning yourself with anticipation.  It was a hot ride right from the onset with these two, which helps suck the reader in by wondering who will make the first move.  I loved Claire.  Shes loyal and loving, with a very realistic look on life.  Even if she is at times rather impulsive.  Reacting instead of thinking it through which has a tendency to land her in a few sticky situations.  Some ending up extremely pleasant!  I give this novel 4 cups.  Cheers to a fabulous read!!!  Here is an excerpt from the book!  Enjoy!!


Desperate to put something in her mouth before she said something stupid, Claire reached for another slice of pizza but hesitated. Her hand hovered over the only piece left.

“We can arm wrestle for the last slice.” Jake’s voice warmed her skin as if he’d touched her.
Claire took in his thick biceps. Without thinking, she reached out toward him, but squashed the impulse. Memories of Brett had her on guard again. Jake was the definition of eye candy; pretty to look at, bad for her heart. Her hand switched course. She grabbed her beer and took a swig.
A mouthful of the dark liquid went down the wrong pipe. Coughing, she gasped for breath. Jake patted her back until she regained her normal breathing ability.
But his hand didn’t move. It stayed between her shoulder blades, fingers spread wide. Sparks shot outward from his palm through her body.
Her breath slowed. Awareness prickled her skin. She yearned for his touch. Everywhere. Her lips parted. Slowly, she turned around. His hand left a trail of fire as it slid down and around her body until it landed on the curve of her hip.
He brought up his other hand to brush a stray hair from her face. His slate blue eyes drew her in to his sexual orbit.
“You have some sauce right here.” His voice’s deep timbre sent an unmistakable signal to which her body responded. Her breasts became full and heavy. Her clit demanded attention.
He wiped the spot by the corner of her mouth with his thumb, then tracked the red liquid across her bottom lip. His head dipped lower. Hers moved up. When their lips met, thoughts of Brett and the Voice of Doom disappeared.
His firm tongue stroked her lips and begged to be let in. She opened and his tongue swept in. She wrapped her tongue around his, dared him to taste his fill. The hand on her hip tightened, and pulled her closer to his hard body. In return, her fingers found their way to the bottom of his T-shirt and started an upward exploration. His coarse chest hair tickled her palm, so alien and enticing at the same time.
His lips left hers and traced down her neck. He arrived at that sweet spot where her throat met her shoulder. Her spine dissolved as he sucked and nibbled.
“You taste so good,” he said, his breath hot against her skin.
The feel of his hands cupping her ass made it impossible to respond verbally other than to moan her appreciation. Her body slid up against his as he lifted her to sit on the kitchen counter. He yanked her closer. The hard bulge in his jeans rubbed against her in the perfect spot.
Every part of her, relaxed only a few minutes before, hummed with tension. Her nipples stiffened into tight nubs. She squeezed her legs around Jake’s waist, her wet core snug against him. She clutched at his shirt, desperate to touch his skin. She needed him closer. Her body demanded it. The endorphins wrapped around her brain gave the go ahead.
She hiked up his shirt and ran her hands up his strong back, felt the tension within him. He tugged her scoop necked T-shirt lower and his lips descended to the top of her cleavage. He licked and kissed above her teal bra.
Claire’s butt started to vibrate.
Not Jake making my ass vibrate.
It was her phone stuffed into her back pocket. She had to stop to answer. Her body screamed no.
“Phone,” Claire panted. She pushed against Jake’s shoulders. “Have… to… answer… my… phone.”
He groaned into her breasts, put his hands on the counter on either side of her hips and lifted his head. The dark look in his eyes showed he hated this interruption as much as she did.
She got lost for a moment in those slate blue eyes. She wanted him. Now. Here on the counter next to the almost empty pizza box. The vibration stopped, but began again a second later. Jake swung her down so she stood again on the kitchen’s taupe tile.
“You’d better answer that.” He backed away, his desire palpable.
Claire reached into her back pocket, warm from Jake’s touch, and pulled out the scarlet phone.
“Hello?” Her voice sounded breathy to her own ears.
“You know, I don’t like to work this hard for the things I want. Do you understand what I’m telling you?”
Panic exploded in her stomach at the first syllable from the Voice of Doom. Claire looked up at Jake, who cocked his head in question.
“I understand. You want the phone and flash drive, but I don’t have them. I looked everywhere.”
Jake stepped closer. He leaned his head toward the phone. She angled it outward so he could listen.
“Your lack of results have, well… Sweetheart, I’m not the kind of guy you want angry.” His voice pitched lower. “Lucky for me, I’m not angry. I. Am. Furious.”
Claire’s temper snapped. Again. This nutcase killed Kendall. He threatened her and her family. He trashed her house. And he had the gall to go all drama king on her for something she didn’t have and couldn’t find? She’d had enough.
“Welcome to the club asshole, because I’m not too happy myself after the job you did on my house.”
“Just wait, Kitten, you haven’t seen anything yet.” He hung up on her. Again.
All I can say is Yummm!!!
Posted by Unknown at 5:10 AM

Nikki, thanks so much for having me! And I completely agree that Claire has some impulse control issues. That girl knows two speeds fast and stop - and stops a little iffy for her. :)