Hello and Welcome!  I have another great author on today to share with you the behind the scenes in her creation of Sexy and Damned!!  Let's take a look:
Creation of a new vampire
Vampires. They are my favorite supernatural creature, always have been. Like most things in life, the love and fascination with vampires comes and goes. For me, I'm loyal to the ones I love.
When I came up with the idea for my Sexy & Damned series, vampires were essential. But for the main character, I had to make her stand out. After all, I don't want to bore you with a regular vampire story, even a stripper vampire. So I created my vampire with a twist. Actually, the demon, Murdock, ensured she wouldn't be exactly like a regular vamp. Demons are tricky. They never give you what you really want. (be warned)
Celee, my stripper, is a hybrid vampire. She has vampire strength, abilities, and immortality. But she isn't one of the walking dead. Murdock gave her what she wanted to fight vampires and survive against them. But she still has a beating heart and when it stops, her damned soul goes to Hell, just as Murdock wants. There's another twist. While most vampires need human blood to survive, Celee doesn't. Thanks to Murdock, she has to keep her heart beating by ingesting vampire blood. In essence, she survives from feeding from them. She gains her strength from vampires. (Guess she should've been more specific when she made her deal with Murdock.)
In a way, she's a fighter because of vampires. To give you a brief history…her parents died during her teen years. The State forced her and her siblings into separate foster homes. She ran away and planned to work to get custody of her brother and sister. Well, she soon found the only way to survive was by stripping, and supernatural creatures paid better than humans did. Sadly, those high paying customers (vampires) used and abused her. She'd spent enough time in the hospital drained to the point of death that her heart turned cold. Murdock stepped into her life, and the rest I've already mentioned.
Aside from my hybrid vampire stripper, I have a variety of holy and unholy creatures in my Sexy & Damned series. Demons, werewolves, a priest, angels, a voodoo man, and a human wannabe rock star are a few characters in the first two books. Care to discover a dark and complicated world of a stripper?
EXCERPT (From The Deadly Stripper):
He pushed open the door to the women's facilities and pulled her inside.
"Jay, we need to talk."
He opened the door to the handicap stall and jerked Celee into it.
"We will…later."
She stood next to the wall, bewildered, while he turned the lock. "Please tell me you didn't drag me here to fuck me. What am I now, your bathroom call girl?"
He met her gaze and took hold of her wrists. "You're not my call girl. I never thought you were. But I am going to fuck you because you’re the one I want."
He raised her wrists and backed her against the wall. Her ass bumped a railing while the front of their bodies collided. Pinning her arms above her, he covered her mouth with his and thrust his tongue deep inside.
Her body lit up like a flame as their tongues mingled in a feverish kiss. She could've resisted, could've used her vampire strength to move her arms and push him back, but she enjoyed his fiery passion and how he strived to please her. He wedged between her legs and rubbed his groin against her. From the hardness of his cock to the greedy kiss, she gave up her goal. Talking could wait. Feeling him deep inside her couldn't.
He raised her arms higher above her head, then held one over the other. Clearly, he wanted to control her, hold her in place while he had his way. She'd let him because she knew it excited him, made him want to touch, nip, and lick every bit of her. He placed his free hand on the side of her face, his thumb close to her lips.
"I want you, Celee. I'm so fucking hard right now." He kept his mouth so close she could feel his breath.
"Show me, Jay." She kissed him. "Show me you want me."
Let's take a look at the series: 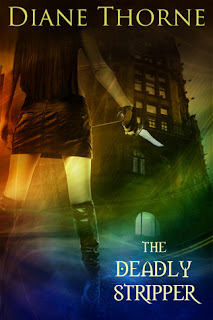 Celee Spence is a stripper trying to survive in a world full of supernatural creatures. She also works for a demon whom she sold her soul to and got a raw deal. Her life is full of sex and violence with no end in sight. Then, a hot vampire finds her and presents a deal. In exchange for help in locating a young woman mingling in Celee’s industry, he offers the powerful elixir she needs to stay alive. Although Celee lacks understanding the vampire's motivation for wanting to save the girl, she accepts his proposal.

Sexy, armed, and dangerous, Celee places her life in jeopardy to save the human. What she discovers in the end not only shocks her, it gives her a new job to add to her resume.

The Deadly Stripper is the first book in the Sexy & Damned Series. 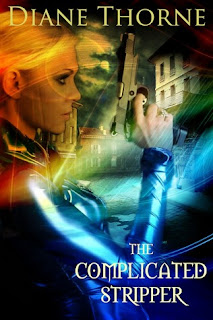 Life is beyond complicated for Celee Spence. Tasked by both a demon and an angel, she must capture two teenagers without sending anyone who interferes to their grave. Werewolves and gun-toting gang members impede her job, but she manages to complete it for her demon boss. After she fulfills her mission for her angel friend, she finds out she will have to take the responsibility of caring for the teenager. Celee longs to avoid eternal damnation, but in a world filled with criminals, violence, sex, and non-humans, can a stripper offer the proper guidance a troubled youth needs?

Adding to her challenges, she must learn to control her raging hormones after she feeds, and her vampire donor seems unwilling to help. He suggests she seek out her friend, Jay, a singer who is pursuing his dream of fame. Can a human lover help her manage her carnal appetite?