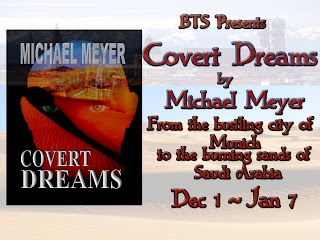 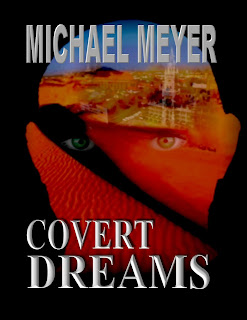 Title: Covert Dreams
Author: Michael Meyer
Genre: Thriller/Suspense/ Mystery
Publisher: Pacific Books
Release Date: June 1 2012
Format: Ebook
Synopsis:
Imagine waking up remembering intimate details about a country in which you have never traveled and fluently speaking a language that you have never spoken. B.J. is living the ideal life. He has a great wife, a wonderful job. And yet he is experiencing life-like vivid dreams of Munich, a city he has never visited.

Stan Halsey is a professor in Saudi Arabia, who sends for his wife to join him. She arrives, and, in the blink of an eye, she vanishes, leaving no trace of ever being alive in either the United States or in Saudi Arabia.

COVERT DREAMS is a fast-paced international suspense thriller that moves from Munich to the burning sands of Saudi Arabia. What is real, and who is responsible for the terrifying nightmare?
Excerpt 1:

The Munich all around her was bustling with activity. She could hear it from all directions. Munich was a wonderful city, a fun-loving place, the live and let live ebullience of the city emanating from its every nook and cranny. She had had a lovely stay here. All of it had been so adventurous, so new, so unlike life back home in Arizona. She could vividly recall the first time she had ventured into a Munich beer garden, where the liter mugs had been so huge that she had had to lift hers with both hands, and the giggles, from him, until he too had had to use both hands.

The fumbling noises he had been making came to an abrupt halt. He began stroking her cheek again. Gus looked so happy, so young, so full of life. It was so hard to imagine that he could be so heavily involved in all this horror.

Gus smiled at her once more. His eyes were soft, so gentle, so caring, so loving.

Maybe this was some kind of huge mistake. Maybe he wasn't going to kill her after all. Maybe everything would turn out happily ever after. Maybe. Maybe. Maybe.

But then suddenly she saw it clearly. It was no fairy tale. There would be no maybe. This was real, as real as the mixture of sadness and fear that now flooded her brain.

And then she died, with her eyes wide open, challenging, piercing his to the end.
Excerpt 2:
Man and woman, husband and wife, person to person—they looked into each other’s eyes, too scared to verbalize their thoughts. Onwards they plunged, right into the dark unknown, oblivious to the fact that their lives at that very moment were intertwined with other lives half a world away, in both Munich, Germany, and in Riyadh, Saudi Arabia.
Time, gradually becoming their enemy, did a flip-flop, and the now became the then, dying, giving birth to what lay ahead, way beyond the present, biding its own good time, in total control, much like a German panzer unit moving across The Netherlands. Just like the power of Allah under the hot Saudi Arabian sun. 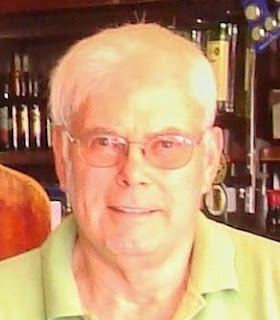 Author Bio
I have resided in and have visited many places in the world, all of which have contributed in some way to my own published writing. I have literally traveled throughout the world, on numerous occasions. I have lived in Finland, Germany, Thailand, the U.S. Virgin Islands, and Saudi Arabia, where COVERT DREAMS is set. I gained the wanderlust to see the world, to experience other cultures, at an early age, and this desire has never left me. If anything, it has only gained in intensity as I have aged. I try to travel internationally at least once a year. In the interim, I spend lots of time traveling around both my home state of California and other nearby states.
I spent my early years in the small town of Lone Pine, California, the home of almost every western movie, in addition to a wide variety of other genres, made in the 30’s, 40’s, 50’s, and 60’s. In fact, Hollywood still films parts of big-time movies there today. My dad, the town’s lifeguard at the time, personally knew John Wayne, Lloyd Bridges, and Lee Marvin, all of whom came to the town’s pool, the Memorial Plunge, at times to cool off after a hectic day of working in the sun. I was even an extra in a movie filmed there in 1957, MONOLITH MONSTERS, a B-cult favorite even today. I was ten years old at the time. Even though I resided in a small town hours from the big city, I was exposed to the excitement of action and heroes at a formative age, and, thus, my interest in writing novels of suspense such as COVERT DREAMS was born.
As a recent retiree from a forty-year career as a professor of writing, I now live in Southern California wine country with my wife, Kitty, and our two other cats.
Places to find Mike
Amazon http://www.amazon.com/Michael-Meyer/e/B005E7M8CW/ref=ntt_athr_dp_pel_1
Goodreads http://www.goodreads.com/author/show/674626.Mike_Meyer
Facebook https://www.facebook.com/MichaelMeyersWritingLife/app_191387770912394
Pinterest http://pinterest.com/temmike/#
Places to find Covert Dreams
Amazon Print http://www.amazon.com/Covert-Dreams-Michael-Meyer/dp/1477509402/ref=sr_1_1?ie=UTF8&qid=1353023136&sr=8-1&keywords=Michael+Meyer
Amazon Kindle http://www.amazon.com/Covert-Dreams-ebook/dp/B005WO860K/ref=tmm_kin_title_0?ie=UTF8&qid=1353023136&sr=8-1
Goodreads http://www.goodreads.com/book/show/12909746-covert-dreams
Book Trailer  http://www.youtube.com/watch?v=b9drU4-um_U

This was definitely a new avenue of book for me and I must say I was quite delighted at the trial run!  B.J., one of the main characters is a very normal man.  I think it makes the story more interesting when it happens to a regular guy as opposed to a paranormal entity or someone that is already a believer in the supernatural.  So we have B.J. who has a completely normal life...that is until the dreams start happening.  They are about a woman named Dabbie and they occur in Munich.  The irony is that these things that happen in these dreams are about places he had never been and people he has never seen.  They are interesting and exciting at first, but that soon ends.  The dreams slowly start taking over his life and threaten not only his marriage, but his very sanity.  He decides to confront his demons head on and journeys to the very place his dreams lead him.  This is the point the book becomes entrenching.
In another part of the world, Stan is starting over in Saudi Arabia.  He waits for the arrival of his wife who never shows.  He searches for her but can find no trace of her actual existence.  Starting over has its downfalls...or was it all just a dream?
The was completely fascinating and a must read for thrill and suspense lovers!  It is captivating and will draw you in completely til the last page!!  Never a dull moment in this book!