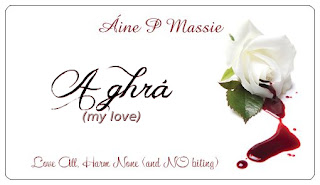 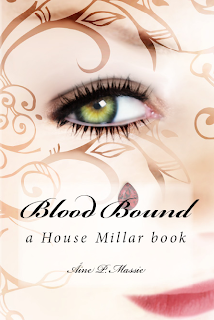 Author: Áine P Massie
Publisher: Geas Publishing
Series: House Millar, #2
Genre: New Adult, Paranormal, Romance
Length: Novel
How many ways can a hearts true love be shared? After poisoning, near death attacks, consummated passions, and possible insanity visit Anya, Nicholas, and Declán they embark on their future. Or at least they try to. Jealousy can be a pain, in more ways than one.
Can Anya protect her lovers, find peace within herself, and lead the House Millar? With her loves and guards, Nicholas and Declán, she sets out to do just that. If only life, eternal life, were that easy.
Come take a walk with our loving family and witness the strange turns and twists as life, love, and passions collide with greed, politics, and evil..

Purchase eBook: Geas Publishing | Amazon | ARe | Barnes & Noble | iStore
Purchase Print: Geas Publishing | Amazon
Signatures: Kindlegraph or Bookplate
Praise for Blood Bound
“Áine gave me even more reasons than ever to love her strong and charismatic cast of characters. Each stepped up their game in the newest book. I will be looking forward to the next installment of House Millar, which I understand will not be from Anya’s point of view. Sounds interesting. If you love a good vampire story…Blood’s Voice and Blood Bound are great choices.” — Kristin @ Better Read Than Dead
“I love the way she made all of the characters work together in one way or the other. Anya shows lots of important vampires that she is NOT one to mess with. She claims her position as Mistress in more ways than one and she does so very well. I especially liked the “letter” at the end! Definitely got me ready for book three!” — Christina  @ Intoxicated by Books
“Although it’s a book about vampires, there are some surprisingly well thought out themes that play throughout the book. I loved the way Anya’s personality has grown and she’s really progressed as a character since book 1. Some of my favorite scenes were the tender moments between Anya and Nicholas and the love story that really builds inthis book.” — Vanessa @ Boekie’s Book Reviews
“I can assure you….. this book is like the first one. A wonderfull read. Easy to get into and easy to follow book. You get to meet some new characters, but also the characters I loved from book one are back. … Awesome book!!!” — Kyanara @ Kyanara’s Mad Reviews
“This time around, I was pulled right into the story. This book starts right where the last one ended. I enjoyed reading more about Anya’s back-story and got to know some more characters and their back stories. Anya is head of her own house now and she seems to be collecting more eclectic members this time around. I recommend this book for paranormal romance fans for its sensual scenes and titillating drama.” — Heather @ Earth’s Book Nook 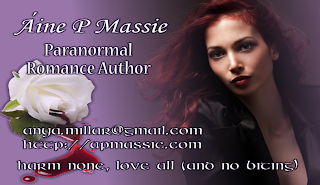 Áine P Massie is originally from Florida, she now lives in Wisconsin where she works on her House Millar series full time while raising four children (the term herding cats comes to mind). Her major in College was Childhood Education (specialization in ages zero to five) with a minor study in Deaf Culture/ASL. She is also a Wiccan priestess dedicated to the gods, family, and love.
A lifelong reader, Áine has always had a particular fascination with vampires, mythology, and the unusual. When she can escape from her children and books, she enjoys . . . oh yes, reading, playing, ritual, a good cappuccino, and working with her healing stones.
Her first published work came in high school where she was part of a writing and drama group. But, she’s been reading the likes of Shakespeare and Poe since late elementary school and enjoys most forms of fiction. Blood’s Voice has been a long time in coming and with its publication (June 2011) Áine embarked on a new chapter in her life.

Website – http://apmassie.com
Blog – http://apmassie.com/blog/
Facebook (Author) – https://www.facebook.com/apmassie.author
Facebook (Series) – https://www.facebook.com/BloodsVoice
Twitter – http://twitter.com/AnyaMillar
Goodreads – http://www.goodreads.com/anyamillar
Google + – https://plus.google.com/115857487824411469639/
eMail – anya.millar@gmail.com
Giveaway
Áine is giving away $5 ARe Bucks or a $5 Amazon GC to 1 lucky commenter. Please, tell us what your favourite thing is about fangs and being nibbled on... ;)

Should we go there this can get a little kinky. It would be pure pleasure to be nibbled on. Oh the thoughts that are running wild in my mind right now. Pure ecstasy. Can I deck the halls with Vampire Hotties For Christmas. There are a few I want to nibble on me.

My favorite thing about being nibbled on is how sexy it feels. I love that close contact

The sensation that runs down your body, the shivers of excitement, the breath against your skin.

Fangs can be so erotic...a little scrape, a little nibble, a little prickle to send shivers of delight. And there are the nips and nibbles that can tickle and tease for what can follow!
ivegotmail8889(at)yahoo(dot)com

I guess it just the nibble, love bites, etc that make fangs so sexy
manning_J2004 at yahoo dot com

If anyones read the Cat and Bones books (Night HUntress series) Bones in the bedroom need I say more! lol thats my favorite thing about fangs :)

I love nibbles and love bites. Gives me shivers. As for fangs, well that's even hotter.
Miranda W
dustykattc at hotmail dot com

They are scary and thrilling at the same time.

Nibbles or full on bites make me swoon!

Wow, I'm not even sure how to answer. I've not had exposure to fangs,but I'm all for nibbling.
planterofhope at aol dot com

I love a little nibble every now and then. Not too hard, just enough to let me know you mean business! YUM! Thanks!
hschrock24112 at yahoo dot com

I love nibbles. And even harder nips they make me sigh. :)

I love nibbles and nips, but I bite on the neck just drives me wild!!!
Ashley A
ash_app@hotmail.com

I don't have any experience with fangs but nibbles are great. Thanks for the giveaway.

Mostly it's sexy! And fangs do seem dangerous still (despite some very un-scary vampire books/movies in recent years).

nothing beats being nibbled. Thanks for the giveaway. Gale pgan427@yahoo.com

Fangs are so sexy! I especially love it when an added benefit of the bite is extra orgasmic!! And they are just so naughty!

It's that aspect of knowing you will be forever changed once you are bitten...

That was a very fun interview...I just love character interviews.:) And now, since the beginning of the House Millar Scavenger Hunt and Blog Tour, well, I have fallen for the, ahem, Boys here. Yes, I now have a smile plastered on my face from ear to ear...thank you because I needed a little spark to my day!