Giveaway and Spotlight On: To Catch a Spirit by Carrie Pulkinen 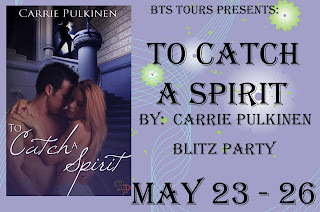 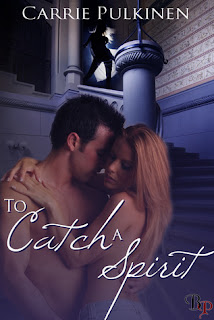 Blurb: A psychic who's afraid of ghosts and a millionaire with a haunted past and a hidden power find that only love can catch a spirit. With love, all things are possible—especially if you need to catch a Spirit.

Psychic Allison Dupuis has a soft spot for Logan Mitchell, even though she's never met him. All it takes is one encounter for the millionaire's true emotions to slip through Allison's shields, and she is intrigued. He needs her help, but Allison soon discovers that the kind of help Logan needs is the kind she isn't willing to give. Logan has a ghost, and Allison doesn't work with spirits anymore.

But the ghost is the least of Logan's problems. Born an empath, Logan is constantly barraged with human emotions. And while his talent has come in handy in the business world, it's about to drive him insane. Literally. Logan has OCD, and his ability triggers unbearable attacks that have him counting and cleaning until he collapses from exhaustion.

Sex and money. That's all anyone wants from him. Even worse, he's plagued with recurring visions of his future wife's death, so Logan has spent his entire life avoiding love. He's given up hope of ever having a normal life, until he meets Allison. She's everything he's ever dreamed of, and now he has to decide if loving her is worth risking her life.

If she'll even have him. Allison's lost too much already — her mother to cancer, her father to suicide. But, Logan is so charming and so real, she can't help but fall for him. Now she has to overcome her fear of commitment...and ghosts...or face spending the rest of her life alone.
Book Links:

She sensed them as they drew closer to her—many different spirits, their energy buzzing on varying frequencies.

"One at a time, guys. Please." she said. But they didn't listen. These were the spirits of the mentally ill, after all. Taking turns wasn't their concern, and they all rushed her. She felt their presence closing in on her like an avalanche, and she was consumed. Every mental illness imaginable was thrown into her psyche as she tightened her grip on Gage's hand and slumped down in her chair.

"Allison! Allison, are you okay?" Gage's voice was a distant echo as she fought to hold on to herself. She was slipping. Sliding into the depths of despair and the spirits were pulling her down.

"It's... No... There's a light... You need to... You need to go to it." She tried to help the spirits cross over, but they wouldn't listen. There were too many. Twenty at least, and they were so consumed by their own illnesses they thought of nothing else. Paranoia, depression, anxiety. Allison felt it all, and it was going to kill her. The pressure. So hard to breath. Her hands cradled her head as the migraine overtook her. Sharp, pounding pain had her crumpled on the floor as she drew her knees into her chest and rocked back and forth.

"Make it stop. Please, just make it stop." She was paralyzed. Frozen by the anguish of the tortured souls that forced themselves upon her. Hot tears streamed down her face and blood trickled from her nose. She gasped for air as she heard a faint voice call, "Get her out of here!"

Carrie Pulkinen has always been fascinated with the paranormal. Of course, when you grow up next door to a cemetery, the dead (and the undead) are hard to ignore. Pair that with her passion for writing and her father's insatiable love for monster movies, and you've got the perfect recipe for an exciting storyteller.

When she's not writing stories of amazing sex with devilishly handsome men, Carrie likes to read, take pictures, and play with her kids. She also enjoys hearing from her readers, who can write to her at carrie.pulkinen@hotmail.com.

If you enjoyed this story, Sweet Release, her first published work is also available from Breathless Press.

Giveaway Time!!  If you liked the excerpt then you will love the giveaway!  One US winner will be walking away with a print copy and one international with a $10 Amazon card!  Just fill out the rafflecopter!!

Not me personally but my hubby took a picture of our son at one of the missions here in San Antonio and in the background on one of the benches that was empty when my hubby took the picture, there is a blurry figure that looks like someone is sitting there.

I CAN REMEMBER AS A KID I LIVED N A OLD HOUSE. 1 NIGHT I SAW JUST 4 A SPLIT SECOND A WOMAN DRESS IN A OLD PERIOD LONG DRESS! THAT SPOOK THE B-JESUS OUT OF ME..:)! ThanQ!
redz041@yahoo.com

We used to live in a haunted house, when I was a child.

Yes, when my son was 18 months and was injured, I saw my grandfather leaning over him

I used to hear foot steps in an old house we used to live in as a kid. One time I heard this horrible noise coming down the stairs. I thought it was my cat thumping down but when I went to look nothing was there but the noise kept coming.

To say the least I ran for my life out of the house!!!

This book sounds like a fantastic read and I have added it to my wishlist. I have had no experience with ghost or strange things.

My daughter did once. I never have.
debby236 at gmail dot com

BELIEVE IT OUR NOT BUT MY DECEASED NEIGHBOR LIVES WITH ME AND I FEEL HER PRESENCE SOME TIMES.

I grew up on the Outer Banks of N.C. If your house wasn't haunted it was considered odd.

Not really but enjoy hearing other people's stories.
Thanks :)
lorih824 at yahoo dot com

No I havent. Not yet but I believe they exists. Tore923@aol.com

Yes, all the time as a child!
sassychassy333 at gmail dot com

Yes actually I have and it was an experience that I normally do not talk about. My encounter was not exactly a friendly one.

I've had a few things happen to me over the years.
-Amber
goodblinknpark(AT)yahoo(DOT)com

No haunted houses or ghost stories, but weird stuff like knowing when something was going to happen used to happen a lot when I was younger - most notably, driving with my Uncle and I told him to slow down on a mtn rd because of rocks in the road-- within a quarter mile, there was a large boulder that had rolled onto the roadway in our lane.

No haunted houses or ghost stories, but weird stuff like knowing when something was going to happen used to happen a lot when I was younger - most notably, driving with my Uncle and I told him to slow down on a mtn rd because of rocks in the road-- within a quarter mile, there was a large boulder that had rolled onto the roadway in our lane.

When i was little I would wake to voices calling my name. They would also say my name during the day sometimes. lol i know it sounds like ive got a mental disorder but i dont i promise! They whisper my name, and thats it. They didnt say anything else; sometimes its a woman voice or mans. Ive asked my folks about it when I was small but they just dissmissed it. It still happens but only once year or so. I dont keep track I just know they def happen less and less.
Mary G Loki

I've never had a ghostly encounter, but my Mother has.

thx god i never encounter with a ghost....

I wish I had a supernatural encounter, but not with something nasty.

I have seen a ghost up close there was one living in my parents house while I was growing up .I was in the bathroom looked into medicine cabinet mirror and saw his face clear as day solid not see through I thought someone was in our house .

I was doing laundry and bending over the dryer taking clothes out and swear someone slap my butt,when I turned around no one was there so that was kinda freaky