Giveaway and Spotlight on QuickSilver Codex by Kallysten 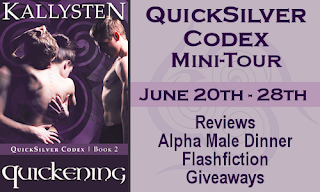 Kally is touring her newest yummy and I have her with me today!!  Kally is a great writer, so if you haven't had a chance to check out her work this is a good place to start!! Be sure to check out the rest of the tour here:  http://blog.kallysten.net/p/quicksilver-codex-mini-tour.html 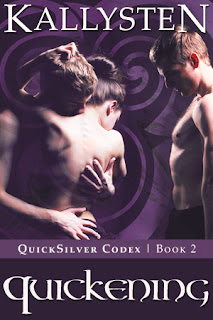 Blurb:
On Foh’Ran, a parallel world in which a magical force called the Quickening rules the lives of humans and vampires alike, Vivien just won her first battle.
Raised on Earth, Vivien had no idea she was heir to Foh’Ran’s throne until Brad and Aedan, her bodyguards, revealed themselves to her and took her to her family’s ancestral castle. Her first confrontation with Rhuinn, the man who usurped her throne, ended as well as could be hoped and she won a few days of respite until she has to appear at the royal court again.
Before she does, however, she’ll need to break through her mental block and master the Quickening to prove herself a worthy daughter of Foh’Ran. She’ll also have to gain allies among Foh’Ran’s influential families. The most difficult part, however, might be to follow Aedan’s advice and learn to act like a queen when she’s still unsure whether she truly wants the throne, and would rather simply be Brad’s girlfriend.

Page where buy links will be posted as they come live: http://original.kallysten.net/2013/quickening/
Excerpt:
In the gray and silver world surrounding Vivien, there were only two touches of color: Brad’s eyes, as bright as a midday sky, and the sparks rushing out of him as he continued to channel, maintaining the illusion around them.
Now that she’d found her way back to channeling, she didn’t think she needed the illusion anymore; she knew they were in her bedroom, not beside the lake. Why break the moment and tell him he could let go, though?
She used the petal to caress his face, the same way she had that first time. Then, like she had that day, she dropped the petal and touched him with the Quickening instead. It was the oddest sensation: she could feel his skin as if she’d brushed her fingers against it, but she could feel deeper than that, too.
The Quickening he wielded was answering her own, and she could tell the emotion he was channeling. It flowed out of him like a rushing river and submerged her, surrounding her in his love.
He’d said the words to her, and she had believed him, but now it went beyond words, beyond trust and truth. She knew the depth of his feelings with the same clarity she knew the texture of his lips when they touched hers. And suddenly, she had to tell him how she felt, too.
No, not tell him; the same words she’d been afraid to voice too soon would be entirely insufficient now that she’d experienced his love. She had to show him the same way he’d shown her.
Until now, she had used her determination as the focus for her channeling. She let that go, and the touches to Brad’s face faded, along with the colors that surrounded him—and his smile.
“Keep your focus,” he whispered. “Don’t let go now, just…”
His voice trailed off when she started to channel again. This time, love burned at the core of her, from which she drew to caress his mouth like a kiss made of air and light. A love that matched Brad’s own.
His eyes widened, and his lips moved over her name, though no sound came from him. She smiled, feeling more exposed in that moment than when she’d first lain in front of him, bare and blushing.
Brad reached for her with his hand and the Quickening; his hand cupped her face while the Quickening enveloped her in ribbons of silk and warmth. The colors bursting out of her flared in response, wrapping around him as she leaned in closer for a kiss.
Down by the lake, she’d channeled her desire for him, and they’d both been swept away by a whirlwind of need that left them breathless and aching for each other. This time, things were softer, sweeter, but no less intense: the difference between lust and love. What Brad had called a loop, however, was the same as before: as Vivien’s channeling and emotions met Brad’s, they intensified and echoed back toward her, then again grew deeper when they reverberated toward him.
“Vivien…” He murmured her name against her lips, his voice trembling along with the rest of him. His hand still cupped her face, the touch like fire and yet more delicate than a feather. “If we don’t stop now, we won’t be able to stop later.”
“I don’t want to stop at all,” she said, shuffling forward closer to him. “Do you?”
For the briefest of instants, she caught a glimpse in his eyes that reminded her of Aedan—a glimpse that contained words like ‘shouldn’t’ and ‘proper’ and ‘discreet’ and ‘guard’ and ‘dangerous.’
Brad said none of it, and instead he breathed out a shaky, “I’d rather lose the Quickening forever than stop now.”
She pressed her grin to his mouth and clutched his shoulders with both hands. His own fingers curled around her waist and helped her into his lap so that she could wrap her legs around him. The Quickening still swirled around them as they deepened their kiss, and as she watched the colors mingle through half-closed eyelids, Vivien couldn’t tell where her channeling started and Brad’s ended any more than she could distinguish between her love and his, entwined like their bodies.
Kallysten’s most exciting accomplishment to date was to cross a few thousand miles and an ocean to pursue (and catch!) the love of her life. She has been writing for over fifteen years, and always enjoyed sharing her stories and listening to the readers' reactions. After playing with science fiction, short stories and poetry, she is now trying her hand, heart and words at paranormal romance novels.
To see her other stories, including free short stories and sample chapters, visit http://original.kallysten.net
Blog:  http://blog.kallysten.net/
Facebook: https://www.facebook.com/author.kallysten
Google+: https://plus.google.com/109981183741806680734
Twitter: http://twitter.com/Kallysten
Goodreads: http://www.goodreads.com/Kallysten
Giveaway:  Just fill out the rafflecopter for your chance to win some awesome swag!! 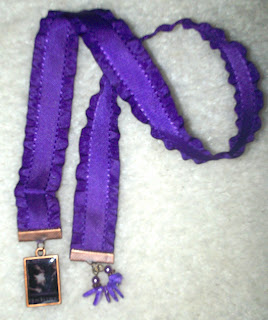 is this INT giveaway ?

Kallysten's a great author and knows how to heat up the pages.

Great excerpt, and I love the purple book thong! Thank you for including international readers too! Congratulations on the book Kally!

Enjoyed the tease. The book sound like a great read. Keep writing so I can keep reading.