Giveaway and Spolight on Covert Craving by Jennifer James 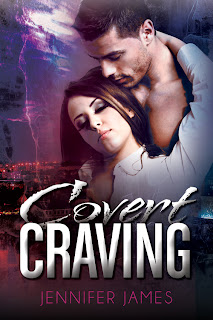 BLURB:
She just stripped in front of an NYPD detective...
The glow-in-the-dark water at Camp Sunny Woods left Chloe Saunders with the ability to disappear from sight.
Thirteen years later, she uses her “gift” to take out criminals when she can. If she’s got to be part of a freak show, she’s going to do some good while in the buff.
And he’s enjoying studying every luscious curve…
Color blind detective Jacob Greiff smokes to weaken the overwhelming messages his nose sends him. One summer camp trip was enough for him. His priority right now is busting the vigilante leaving burglars tied up with panty hose and women’s scarves.
He thinks he’s hallucinating when he sees a petite, bare foot brunette in an enormous trench coat at his crime scenes because for the first time in years, he’s seeing someone in full color.
He’s not sure he’s buying it, but Chloe sure looks great when she’s “invisible.”
Despite his own supernatural abilities and the raging lust between them, Greiff wonders if Chloe isn’t some kind of nut who gets off on public nudity. She insists she can disappear from view when naked, that he’s the only one who can see her when she’s in the buff.
Their shared past comes to a treacherous intersection when a man shows up at Chloe’s apartment and informs them at gun point it’s time to report for duty—or else.

EXCERPT:
Greiff got to his feet and helped her stand. He steadied her with both hands at her waist. “Come on, honey. Hopefully things get nice and boring from here.”
“One can hope.”
They clambered back into the boat, and he lead her to the stairs to go below deck.
A wicked light lit his eyes and he licked his lower lip, his attention zeroed in on her breasts. “There’s a small shower stall and fresh water tank on this boat.”
“Well, salt water does get pretty itchy if you don’t wash it off.”
Lucky cussed and slouched down in one of the chairs. “I’m the one who got shot. I should be getting laid, not him.”
She ignored the whining and let Greiff carry her to the head.
Once inside, he stripped her clothes from her body and forced her to sit on the toilet lid. A cushy towel softened the hard surface.
“No food on board, but otherwise this place is pretty decked out.” He started the shower water and removed his destroyed suit pants.
The hard, thick length of his cock jutted out and she grasped it in one hand. She licked a circle around the head and he tensed, both hands fisted at his sides.
“You’re salty.”
“Ocean water.” His voice sounded strained.
She pumped her fist up and down once, and licked him again. His nostrils flared, and he buried his fingers in her hair.
“I can smell how aroused you are. How wet.” He bent down and cradled her in his arms. “And I think I promised you something.”
She sucked in a deep breath and met him for a long, hungry kiss. They moved under the water spray, and he twined her legs around his waist, supporting her weight with one hand.
“How are you doing that?”
The water cascaded over his dark hair and into his eyes. “I got an extra dose of the Professor’s secret sauce recently. At least, that’s what Lucky thinks. It made me stronger.”
“Oh, Greiff.” Anger, sadness, and helplessness replaced some of her ardor.
“Shh, sweetheart. There ain’t nothin’ to do about it now.” He reached behind her and grabbed a bottle of floral scented shampoo. He moved and pinned her to the cold wall of the stall with his groin and one knee beneath her ass. The heat of his shaft was trapped between them. “You okay? You complained about your pelvis earlier.”
“Oh, I’m terrific.”
The blue of his eyes gleamed, and he massaged the lather into her hair, then his. With slow, exquisite care, he washed every inch of their bodies, then took the shower head down and sprayed them off. He spun around and rested his back against the wall.
“I need to soap your back.” He handed her the shower head.
Desire melted her muscles into putty. Unable to take more of his hands roving over her, but never touching her where she craved the most, she wrapped his cock in her fist and stroked it hard. She licked his chest to his neck until she reached his mouth and plunged her tongue inside.
“Give me that.” He reclaimed the shower head and positioned it so the stream struck her clit from behind.
The force of the water teased and tormented, but wasn’t enough to shove her off the precipice into orgasm. He sucked on her neck and ears, the heavy muscle of his thigh dug into her ass cheek. She wriggled and squirmed as her frustration mounted.
“That feels good.” With both forearms on his shoulders and the strength in her thighs, she hoisted herself higher and sank down again. “But you inside me would be even better.”
“Not in here.” He re-mounted the shower head in the holder over head. “You’re not healed enough if we slip and fall.”
“Jake—” His name sounded a lot like a whine, even to her, but she didn’t care.
“Nope.”
He strode into the bedroom with the water still running and laid her down on the bed careful not to let his weight rest on her legs. With both hands, he spread her thighs wide and kissed his way from her belly button to her clit.
LINKS:
All Romance Ebooks
Amazon
Barnes and Noble
GoodReads

BIO:
Jennifer James hates to talk about herself in the third person and has now started so many series books she’s wondering if she has a mental illness. A traditionally published author who recently dipped her toes into the oceans of Indie land; she’s finding the water quite nice and plans on sticking around. She loves Dirty Palmers in the summer, Spiked Cocoas in the winter, and Jack and Honey with Pepsi any time at all. Recent college grad, wife, mother, cat wrangler, and dog belly scratcher, Jenn spends a lot of time at her computer, frowning at the shenanigans of people only she can hear.

Jennifer is  giving away some awesome prizes!!  Just fill out the rafflecopter!  Good Luck!!
a Rafflecopter giveaway

Hi Nikki! Thanks for hosting me. :) You're awesome and have great taste in books.:)