Giveaway: Book 2 in the Caranlity Series 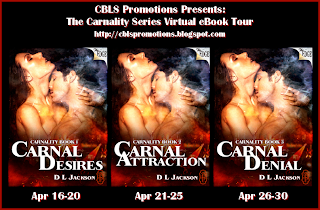 Welcome to part 2 of the Carnality Series Tour!!  Today I have book 2 up for grabs.  Let's take a look at the second book Carnal Attraction: 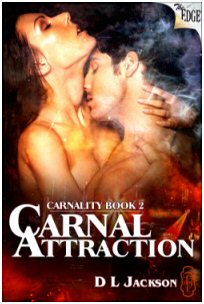 Thousands of years have passed. Azael has returned to Jezebel, and he’s brought her memories with him. Now that Jezebel has them back, she doesn’t intend to lose them again by starving herself of life energies. So, when she encounters a broken heart in the seedy strip club where she works, she knows dinner will be special that night. This time, the feeding will be on her terms, and the man who’s wandered into her snare, shouldn’t miss the small bite of soul she takes. Much.

“A freebie. You like freebies, don’t you?”
He nodded slowly.
“Good.” She leaned in, hooked her bra top around the back of his neck, and pulled him into a kiss hot enough to melt him in his boots. Seconds later she released her top, leaving it draped on his shoulders.  “Meet me out back in five minutes,” she eyed his buddies, “—alone.”
Jezebel rolled to her heels and rose to her feet, slowly sashaying her way back from where she’d come. As she passed Azael who crunched on an apple, leaning against a wall that led to the changing rooms, she reached out and brushed her fingers across his jaw. “I’ve brought take-out.”
He grinned and tossed the apple over his shoulder. “American?”
“An MRE,” she said as she exited into the back room.
“God, I love meals ready to eat.” He turned and followed.
BUY LINK:
http://www.decadentpublishing.com/product_info.php?manufacturers_id=113&products_id=494&osCsid=6c1232251c1e45744bd0b3ee7262f414

Hmmm, tough question. I don't remember any good hunky demons in any books I've read lately. Nor superheroes... But I've read and can remember plenty about vampires like JR Ward's Black Dagger brotherhood, or Sherrilyn Kenyon's Dark Hunters. Mmmm, any of those would be great.

Had a HUGE crush on Shade in Larissa Ione's Demonica series. YUM!!!

I'm reading the latest of JR Wards' BDB books, so, any of guys would do just fine!
MJB
msmjb65 AT gmail DOT com

Thank you Nikki for hosting D.L. Jackson on your Blog, Close Encounters with the Night Kind.

I can't wait to read this entire Series..."Carnal Attraction" (Carnality, Book 2)of Azael & Jezebel’s Story sounds just as Dark, Decadent and Erotically Intriguing as the 1st Book in your Series, "Carnal Desires".

He grinned and tossed the apple over his shoulder. “American?”


“An MRE,” she said as she exited into the back room.


“God, I love meals ready to eat.” He turned and followed.

Oh for your question...My favorite supernatural hunk is:

I would very much appreciate the opportunity to be considered in your very generous giveaway of an E-copy of "Carnal Attraction" (Carnality, Book 2). Thank You!

Hmm hunky demons? I think the best this year has been the demon boyfriend in Illicit magic. It was kept very quiet that he was a demon, but he did sound very sexy!

Luc from Personal Demons. it's a YA book