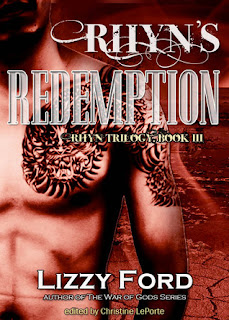 Katie and Rhyn are in a race against time to free Katie from the underworld, before Death claims her soul and that of her child. When Katie’s guide in the underworld disappears, she has one option: trust the ghost of someone long-dead and seek out Death's fortress in order to try to escape through the portal leading back to the mortal world.

Rhyn discovers Katie's alive but struggles to control his demon powers, which were unleashed when he un-bonded her. He opens the barrier that keeps Death safe from the Dark One. Demons and his immortal brothers follow him as he seeks out Death to make a deal for Katie’s life. When Death reveals to Rhyn what will happen if Katie’s soul is returned, he must choose between destruction of the world or his own mate.

So this is the third part to an amazing trilogy about Ryn and Katie.  But don't worry.  This isn't the end of the series, more like the creation of Rhyn and Katie.  Which, in my opinion, totally rocks!  We begin with Katie being trapped in the underworld.  Death hasn't claimed her soul and her top assassin is trying to lead her back to earth before she becomes dead-dead.  Katie is followed by Rhyn's dead brother, but only she can see him.  She begins to doubt  everything, including her guide that is starting to act funny, and forgets is way.  Is it just her or are things not as they seem?

Rhyn, meanwhile is forced into a suicide mission to reclaim his brother's house.  His older brother asked him to do this knowing he probably wouldn't make it out alive. Which was fine for both of them. But their baby angel has other ideas.  He jumps into the portal before Rhyn, which causes Rhyn to redirect his suicide mission to a rescue one.  It seems that everyone has it out for Rhyn to ultimately fail and die.  Will Rhyn allow his own fate to be manipulated?

Death holds all the cards in this game of life.  It is her test for Rhyn that separates the lovers, and Rhyn must pass or forfeit his life.  The only one who knows what that test will be is Death.  But she has other roles to play.  I can't say enough good things about this series. I truly have enjoyed the many spins Lizzy has put on Death and the realms of Hell and the Immortals. These books were a true treasure with their fresh spin on the age old battle between good and evil. It is completely up to Rhyn to decide his fate and pass his test.  But will he do it?  LOL...That is the better question!!  Great, Great Read!!

I love Lizzy Ford's books. Her books just captivates you from the start and never let's go until the very end and this book is no exception.