Good morning my lovelies!!!  I have just finished the cutest book and I can't wait to tell you all about it!!  But first I was able to percure a guest post from the fabulous author of this book!!  Take it away EC!!

And here are the book details: 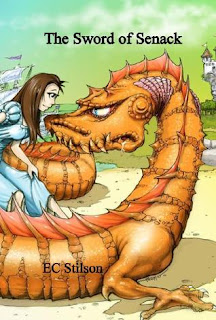 Aliya Fisher knows nothing about her true heritage until a vindictive sorceress kidnaps her brother and sister. The young adventurer must take up her birthright, battle strange creatures, and find the Sword of Senack if she hopes to best the witch. But even if Aliya finds the famed weapon and survives the perilous oceanic journey, the enchantress is far more than she appears. How does one defeat an immortal who lusts for revenge?

I have always, always loved the water.  I feel at home within its cool embrace, so this book was right up my alley.  It was about a family that had fled Earth because it had become polluted and over-populated to start over on a new alien planet.  The family bought a castle overlooking the ocean.  They had five children that were all forbidden to go near the water or talk to the natives.  So as you could imagine, life was probably a bit dull.  Until the youngest of the crew revealed a terrible secret.  She had answered the door when someone had knocked and let in what she thought was a kind young woman.  But the woman began to change towards her and Indy became afraid.  So afraid that she tried to warn her older sister about her and what was going to happen.  But Indy's secret came to late to save her.  She was taken right in front of her sister and there was nothing she could do about it.

We jump five years after the disappearance of Indy.  Her mother has withdrawn inside herself and her father is rarely at home.  Aliya is tired of watching her family fall apart around her.  Her father disappears inside of his study for days and no one was allowed in. Jack, her oldest brother, had made plans to leave with a girl and had sailed out of her life that very morning.  Aliya watches er father enter the study and close the door behind him.  Unable to take the stress anymore, she plans to confront her father and have a talk with him.  But as she opens the door, she is shocked to find the room totally empty.  And here begins an amazing journey for Aliya, Skye, and Vander.

This book was filled with many creative, lively, and unique characters.  EC opens up a new world under the ocean.  The children must follow a certain path to not only save their youngest sister, but their father, oldest brother, and their world as well.  In this fantastical world nothing is as it seems and its hard to tell who is the bad guy and who isn't.  It was hard to pick a favorite character but out of the pack I was most taken with the Rock King.  All the children are delightful in their own way. This book is going to be a series, but how long of one, I know not.  I will tell you this, it was an absolutely delightful read!!!  I enjoyed the imagery and the array of characters thoroughly!  My only regret is that the second book is not available, for I can't wait to read it!  Excellent work EC!!