Review: Blood Moon on the Rise by Lauren Smith 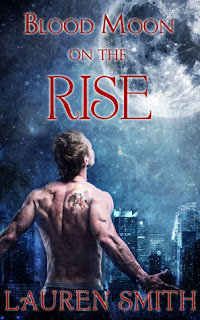 Tamara wants nothing more than to protect the world from deadly paranormal creatures. Well, maybe she wants a little more than that. But the man she craves—Nicholas Rubin—is strictly off limits.
For years, Nicholas has been her loyal partner, helping to defeat murderous werewolves and take down unruly vampires. Nicholas has always given Tamara his protection, friendship, and support. The only thing he hasn’t given her is his love. A relationship between Tamara and Nicholas is forbidden by ancient law, and the consequences could be deadly.
But when a powerful Sorceress threatens both their lives, Tamara has a choice to make: Give into her feelings for Nicholas, and risk her life. Or take a chance on Nicholas, and receive his love—at a price.

This was an great concept.  Actual bloodlines that birthed talents just specifically for this job.  Nicholas was a magic-user, born from a family of magic users.  His path was set because all of his family was also in the brotherhood.  He was known as a tracker.  He used his magic to locate the paranormals that got out of line.  He would be paired with a hunter.  Hunters were born with enhanced talents.  The only problem was he was in love with his partner, something that was strictly forbidden.  Hunters could date other hunters and tracker could date other trackers, but no intermixing.  It was against the rules.  So they kept their feelings out of their work, and struggled to live separate lives.  That is until one kill and an evil sorceress marks them for revenge.

It was a short dip into this authors world.  It has the makings of a great series if the author chooses to continue on this path. I can't wait for more !  I would love to know more about the society and what happens to Tamara and Nicholas.

It does sound like a creative world for a story. Thanks for sharing your thoughts, Nikki!