Giveaway and Spotlight On: Angling for Love by Lea Barrymire 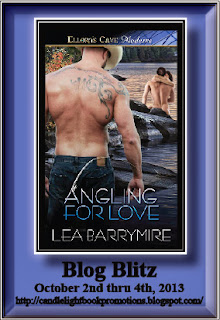 About Lea Barrymire
Lea lives in Western New York with her hubby, three children, and miscellaneous critters. Before the rugrats, she lived a life of adventure, following her husband all over Europe with the US military. She’s slept in a car outside Paris, drove six hours just to see tulips in the Netherlands, and knocked ash from her shoes at Pompeii. Now she spends her time in life’s adventures at soccer games, PTA meetings and school plays.
Lea has loved reading from a very young age, spending many sleepless nights devouring books. Science fiction and paranormal were her favorite genres to read as a teenager, and that love bled into her adult life. She started writing during a bout of insomnia, to fill time, and found it filled a creative void. Now she communes regularly with the characters in her head and tries not to laugh out loud when they say something funny.
When Lea isn’t reading, writing or corralling kids, she enjoys watching movies and sciencey shows, or just kicking back and listening to some music.

Blurb:
Arin Walters decides that after ending her long-term relationship with her cheating boyfriend, she needs a vacation in the Montana mountains. She packs her fly-fishing gear and heads off for a week of relaxation and emotional healing.
Brent and Jared have been best friends since childhood. The abuse they suffered as children binds them together. They want a woman to share and build a life with but they’ve been burned in the past.
When Arin shows up at their fishing lodge, sparks fly and all three feel the beginning of something they crave—acceptance and love. Now they must hope that the passion between them is enough to help them leave the past behind.

Excerpt #
She was still staring when two large hands ran down her arms. A squeak escaped her before she could swallow the sound, and she shivered. She turned just in time to find Jared’s face lit with a wolfish grin. He tried to hide it behind a cough but she had seen the sensual look shimmering in his eyes.
A trickle of apprehension wormed through her thoughts. What was she getting herself into? She shouldn’t have started the flirting thing with this man. He oozed sex and even his innocent looks weren’t so innocent. Maybe he flirts with all women. Of course he does. Now what if he thought she was going to hop into bed with him this week? Was she really willing to do that? On one hand she seriously wanted to. On the other was the reserved, scared Arin who hadn’t been with anyone other than Robert.
“Sorry, didn’t mean to scare you.” He didn’t mean a single word and she knew it. With a chuckle, he turned her toward the window again and stood close behind her. She could feel his body heat radiating against her back. It would only take a slight lean, an itsy-bitsy move, for her to be flush against his chest. She felt his breath stir the hairs at the back of her neck as he whispered, “It’s beautiful, isn’t it?”
“Um…yes, it is.” She sidled away from him and tried not look as if she was retreating. The knowing smile that played across his lips made it obvious that she didn’t hide it well.
“Do you want to see your room or find Brent first?”
“I’d like to see my room first, I think. And honestly, I’d like to grab a snack. I had a little something in Denver but I was too nervous to eat a proper lunch.” She finally got around to observing the rest of the floor plan. A few doors led off into unknown areas of the building, but the thing that caught her eye was the spiral staircase that was partially hidden behind a large bookcase. She turned questioning eyes toward Jared. “Cool staircase—where does it lead?”
“That, my dear, goes to the den of debauchery, better known as the staff quarters.” He laughed. “You won’t get to see those rooms unless we become much friendlier in the next few days.”
He turned and walked toward the other side of the room, turning just in time to catch her watching his ass. A grin spread across his face before he pointed through one of the doorways. “Come on—I’ll give you the doorway tour and show you to your room.”
She scampered after him, trying in vain to look as if she’d meant to get caught staring at his behind, again. The perpetual blush she’d sprouted the first moment she met him must be glaringly obvious. She hoped that a quick shower and a mental talking-to would get her mind and body to cooperate. She couldn’t deal with five days of continual embarrassment.
Legal Information:
- Entering this contest means you have read, understood, and agree with all rules and regulations stated.- Entrants must be 18 or older (or age of majority in your country) to enter and to win.- No purchase necessary.- Void where prohibited.- All stated rules are subject to change without notification or reason given.- Chances of winning vary widely based on the number of entries received.- Prize is as stated. No substitutions or exchanges. Residence of the United States only.

Thank you for having me on the blog, Nikki! ~Lea

What a Great sounding book

I love menage as the scenes are always super hot

Sounds like her getaway is about to get interesting. Thanks for sharing the blurb and excerpt and for the giveaway opportunity.

Forgot to answer the question... I like it when a menage gets past the point of the awkward starts and things all start to click into place and feel natural as each one has something unique to give to the relationship.

I agree w/ Sophia. When all the partners are in tandem and know what to do and do it with confidence :) Thanks for sharing!

I haven't read any yet, but it sounds inertesting.Deb P

I love the building of the relationship. Thanks for the giveaway.

I love a great menage story, especially when it is approached with humor and people that like each other (not so much for the ones where a partner is conflicted or jealous). This looks like a lot of fun!

Want to read this book!!