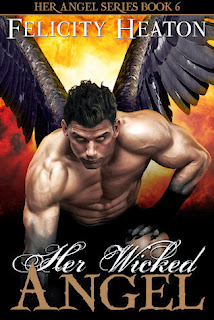 This was my first taste of this series, but not my first taste of Felicity Heaton.  I enjoyed one of her other vampire series, and was eager to give this one a try.  I wasn't disappointed.  I really like Liora's character!!  She was a naughty and playful witch and one of the first things she says to Asmodeus made me laugh out loud.  Her boldness and just her personality in general made her a delightful addition to the crew.

Asmodeus was another puzzle all on his own.  He was raised to be evil incarnate, but seemed to have a streak of good in him.  It trickles out little by little throughout this story and realize that his origins do not define him as previously thought.  Liora was actually a fan before meeting him in person.  Anyone that could ruffle feathers they way he did must be someone to watch out for.

The story itself was completely fascinating.  There is a bigger plot coming to a head and pieces of it unfold at the end of the story.  The Devil may actually be more than he leads on to be as well.  There were many interesting characters peppered throughout the book, one being the Devil's daughter.  I believe her story was earlier in the series.  Coming in this late in the game, I really had no problem following along, and I am no fully sucked in.  My only decision now is this:  Do I go back to the beginning or wait for the next installation?  I'm really anxious for the next book!  If it follows along these lines, it is sure to be steller!!

I love her books!

Thanks for the great review, Nikki! Glad you fell for the angels as well as my vampires. The next one will be epic (but Her Demonic Angel - Veiron and Erin's story was pretty epic too... and so was Her Guardian Angel). I have to up my epicness with the next one. It's going to be wild.