Giveaway and Guest Post with Felicity Heaton and her Vampirerotique Series 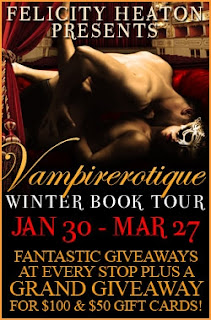 Thank you, Close Encounters with the Night Kind, for having me here today as part of my Vampirerotique Winter Tour!

I’d had an idea a couple of years ago for a book that involved a vampire lord and a heroine who was offered to him in exchange for his continuing protection of their village. All very retro-vampire movie sounding. I set it aside and focused on other projects that were demanding my time.

The setting that leapt out at me on reading the notes for the book in my maybe folder was an erotic theatre that catered to vampires and put on debauched shows involving vampires and their human thralls to tantalise and tease the audience. I remember when I wrote notes for the hero and heroine’s time at the theatre, that I knew it was something unique and interesting, and would be a fantastic place to explore in the story. The theatre was perfect for my new series too. I wanted something that felt sensual and seductive, and decadent. A place that I could describe in vivid detail and really draw readers into a darker yet enthralling world of vampires. I was looking for something different, something that would really grab readers and excite them. Vampirerotique, the theatre in the series, was that place. I dreamt up four very different and very sexy vampire bachelors who have run the theatre for a century, dedicating themselves to the business and forsaking any pursuit of pleasure for themselves, and then crafted the world around them, creating two very different types of vampire—the aristocrats with their pure blood and haughty attitudes, and the elites with their mixed families of vampire and turned humans. The divide between the two is similar to lords versus commoners, and added an extra layer of tension and extra barriers into the stories.

The theatre is the most important part of the series for me though. It has a life of its own and is its own small world, with the owners, the performers, the stage shows, the audience, and the staff. There are politics in play, dark pasts that some would rather remain hidden, and forbidden love. The books set at the theatre will all feature the stage in some aspect and the shows that happen on it too, adding a spicy blend of voyeurism and acts seen through the eyes of the hero or heroine that lead them to do wicked and sometimes dangerous things.

Once I came up with the idea of the theatre and had it detailed out in my head and on paper, the stories of the heroes came to me. Javier’s story, Covet, features the scene I read that sparked the entire series—the now infamous private box scene.

If you like your stories with panties-scorching heat that could melt steal, intense emotion that will have you reaching for the tissues, and a healthy dose of action, then why not step into the world of Vampirerotique and immerse yourselves in unforgettable characters, undeniable passion, and romances that will stay with you long after you’ve read the final word. 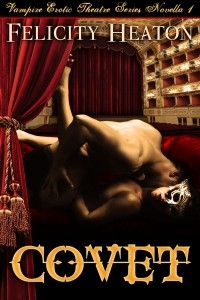 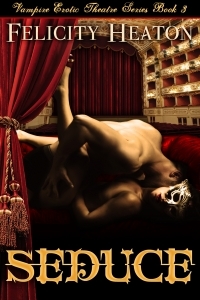 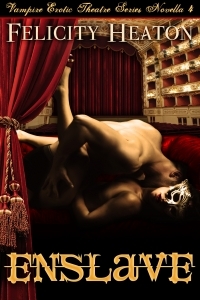 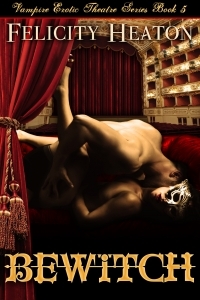 In 2011, five of her six paranormal romance books received Top Pick awards from Night Owl Reviews, Forbidden Blood was nominated as Best PNR Vampire Romance 2011 at The Romance Reviews, and many of her releases received five star reviews from numerous websites. In 2012, she received the GraveTells Author of the Year Award and her vampire romance novel, Heart of Darkness, was selected as a 2013 Epic Ebook Awards finalist in the paranormal romance category.

Felicity is giving away a really awesome swag pack on this stop!!!  Take a look: 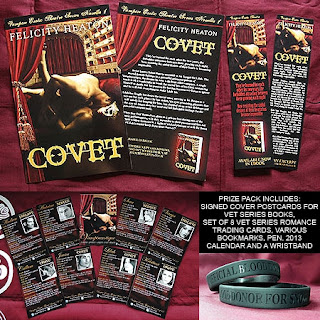 Just fill out the rafflecopter for your chance to win!!
a Rafflecopter giveaway

I LOVE felicity's VET series! I still love the first book in the series, with Javier and Lilah, after all, its what got me hooked in the first place! ^_^

I am new to Felicity's books and I am really enjoying them.

I'm new to Felicity's books too, but I just found Covet on Amazon for free! Thanks!

I like reading about the background of a story/series. The nitty-gritty grunt work that must be done by the author before she can begin to put story on paper (so to speak). The background gives a whole new dimension to the characters and stories.

I haven't read the books. Thank you for sharing :)

Haven't read any yet,looking forward to doing so.Thanks for the giveaway.

The VET Series is brilliant, I love them all & looking forward to Snow's book too. Love how you come up with these books Felicity, your imagination & ideas you come up with are absolutely fantastic & reading the background to your stories is soooo interesting.
Please never stop writing.

Felicity's VET series is FAB!! The vamp heroes and their lady loves are great characters.

The stories are action packed and I can't put the books down when reading them!!

Thanks for great post & giveaway!!
- enjoyed finding out where the idea for the series came from.

I have read Crave and Covet. I am really wanting to read the whole set. I have loved the two I have read so far. Felicity Heaton is an amazing author. Thank you for the giveaway chance and the great stop. :)

I have read the first few and LOVE them! I need to get caught up and can't wait to read Snow's story.

I haven't read the series yet. Thanks for the giveaway. Tore923@aol.com

I have Covet and Crave, just haven't had the time to read them yet. I like the idea of the series taking place in the theater, great concept and new. I've read some excerpts and needed to sit in front of the fan afterward.
luvfuzzzeeefaces at yahoo dot com

Nope, not yet. Thank you for the giveaway!

I have read half of the books in this series and i love them. They all are different, and I have trouble with some books in a series being too alike. The scenes are steamy and the characters are believable!.

Thanks for the chance to win.

I havent read any of them yet but there on my wishlist!

Felicity's series are wonderful. It is hard to pick my favorite as I am addicted!

I love these books!! I can't wait to read this one!! Thank you for sharing.

Thanks for participating in the tour.Thanks for the giveaway.

i love VET series, cant wait for snow story
thanks for the chance :)