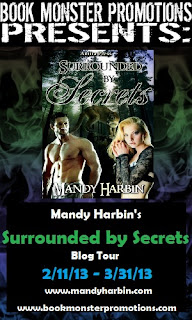 It's Friday!!!  To hose of you that have been following along with my reviews of these sizzling hot Wood's men, today is the last day!! Mandy has been visiting all week and I wanted to wrap up the last book with a Top Ten from her about her series.  This is what she had to say:
Hey everybody! I can’t believe the Woods Family Series tour is almost at the end! I have had so much fun visiting all the blogs and reading your comments. When then peeps here asked me to write on the top ten things about the series, I was both excited and nervous. Excited because it was something a little different and something I hadn’t listed before. Nervous…for the same reasons. Oh, plus, I just know I’m going to forget something. I’ll wake up one morning and think, DAMNIT!! Why did I forget to mention THAT? :P
So here it’s my top ten list…David Letterman Style:

10. Thrill of the unknown…will they ever mate? And if they do, will they kill each other?

8. Lots of emotions covered. Series ranges from serious to funny to sexy to sad to happy...in no particular order.

7. Written in such a way that there could be a spinoff series.

5. Men who would rather suffer a case of blue balls than risk mating with an unwilling woman.

2. Educated and/or strong-minded heroines—There’s a time and a place for weak chicks…this series is not it.

And the Number 1 thing that makes this series great? HOT SEX! Oh, c’mon, you knew it was going to be on the list.

So there you have my top ten list on this series. If you haven’t started reading it yet, you can get book one, SURROUNDED BY WOODS for FREE for a limited time. Grab it while you can!!

Let's recap on these hotties: 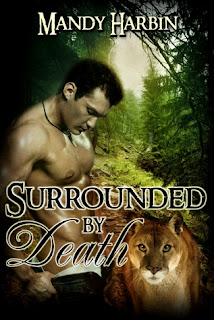 SURROUNDED BY DEATH - Prequel
His family speaks of his death as a tragic example of why it’s too dangerous for the Woods men to be around available women.
Eric Woods is now dead, but was his last night as a living, breathing mountain lion shifter as horrible as his family has always believed?
Experience Eric’s last night with Simone--a woman whose need for carnal pleasures for exceeds all rational thought.
Reader advisory: This book contains graphic language and explicit sex. It is meant as a bonus read in the Woods family saga and should not be viewed as a typical romance.
Purchase Links: FREE at  Amazon / B&N / ARe 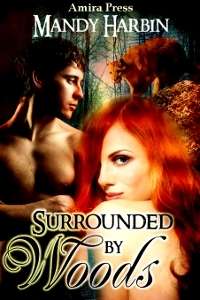 SURROUNDED BY WOODS - Book 1
When Mikaela Patterson must take on a client with specific requirements that no single women be allowed on his property, she keeps her broken engagement a secret. She doesn’t realize her client and his sons are mountain lion shifters whose instinct to mate with any available woman turns deadly.

Josh Woods is her client's eldest son, and he is immediately drawn to Mikaela. Knowing his father would never allow an available woman on the property, Josh doesn't understand his fascination with her. Josh and Mikaela fight their attraction because of their own secrets, but when the truth comes out about Mikaela's true availability and Josh's animal instincts, they must be prepared to face the consequences.
Reader advisory: This book contains graphic language and explicit sex.
Purchase Links:  FREE at Amazon / B&N / ARe 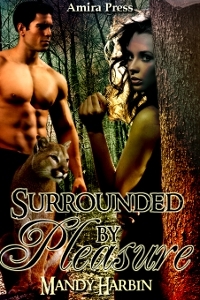 SURROUNDED BY PLEASURE - Book 2
Krista Owens is an attorney who works too much and plays too little. When her colleague, Mikaela, requests her assistance for a month on the Woods estate, hinting that her brothers-in-law are all hot with commitment phobias, Krista agrees to tell the guys she has a boyfriend, hoping to finally lose her virginity.

Toby Woods doesn’t want anything to do with Krista, but watching his brothers fight over her ignites his feral side. He wants her, and he’ll stop at nothing to have her.

He knows it’s temporary, but will he be able to let her go when it’s time?
Reader advisory: This book contains graphic language and explicit sex.
Purchase Links:  Amazon / B&N / ARe 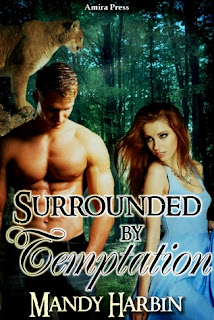 SURROUNDED BY TEMPTATION:
When Krista needs Ariel's biochemical expertise because her new boyfriend can turn into a mountain lion, Ariel thinks her sister has lost her mind. But the possibility of a major discovery like this is too much of a temptation to ignore. Create a drug to stop a shifter from forcing a mating? Only if she got to test his sexual limits herself.

Rob thinks Ariel is an angel in disguise, and he immediately knows she's the one for him. But is he strong enough to resist his animal's need to claim her once the temptation begins?

Warning: This book contains a shifter who must resist his feral need to mate and a biochemist who is hell-bent on testing his sexual limits. You'll never look at science the same way again. 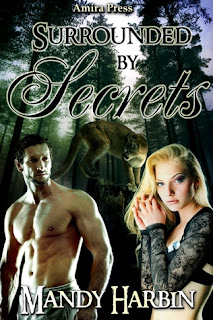 
Lillian Caldwell has eyes on the hottie with the body, Jack Woods, one of the men who bought her family land and now new boss. She has big plans for Jack, including the getting-him-horizontal variety, and she always gets what she wants.

Jack is the family hard ass who’s trying to make amends. His plans of digging into the family secret he discovered are thwarted when he’s forced to work with Lillian, his gorgeous, pain-in-the-ass neighbor.

But a night of passion will unlock the secrets surrounding them and change both their lives forever.

Warning: This book contains a spitfire woman who doesn’t take no for an answer and a strong alpha mountain lion shifter whose preverbal bark really is as a bad as his bite.

I really enjoyed this series and I was sad to see it end.  But the author did a great job of wrapping things up...and leaving things open.  Our last yummy Wood's brother is up and his mate is taken in an unconventional way!!!!  To say this starts out at love at first sight would be misleading, but I will guarantee you will like Lillian!  She's sassy and refuses to back down, which is exactly what old Jack needs.  Jack is the hardest of all the brothers....so he definitely deserves a female that can give as good as she gets!!  This book is chalked full of mystery and we finally get some answers to the boys heritage and what looks like an opening for more....yummy alpha males!!!!!  I enjoyed this series but I must say that Josh had my heart.  He was the one I would snatch up....or rather hope he would snatch me up!  The series was great and can't wait to read more from this author!!!

All of them! :) Probably Rob.
-Amber
goodblinknpark(AT)yahoo(DOT)com

Ahhh, there all to fine for there own good ;)
but if you most have me pick just one (Toby Woods) it is ;)

They all sound yummy!

All time favorite is a tie between Jericho Barrons and Bones from Jeaniene Frost's Night Huntress series!

My favorite Woods brother would be Rob. YUM!!!!!!!

I think Rob is perfect for me

Surounded by Secrets and Surounded by Pleasures sounds really good. Thanks for the giveaway. Tore923@aol.com

I think Jack is the most appealing, but hard to say from the excerpts.

I do have to say I would not at all mind an introduction to Josh ;=D Thank you for the fun.

I've read the first 3 books in the series, can't wait to read the rest. Thanks for sharing!