Thank you, Nikki, for having me here today! It's great to be back at Close Encounters with The Night Kind, which seems like the perfect place for vampires to hang out.

I'm hopping around the blogs all this month and next in preparation of Blood Prophecy's release. The book is the fourth novel in the Sons of Navarus series and will be a major turning point. This book features Ramiel, one of the two Sons who must decipher the Prophecy of Idolas and stop the Archons from winning the vampire civil war.

Here's the blurb for Blood Prophecy: 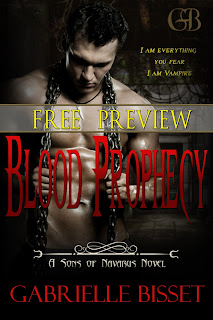 I am everything you fear. I am vampire.
As the two Sons chosen to decipher the Prophecy of Idolas, Ramiel and Thane journey to find the key to defeating the Archons. Together with Noele, a born vampire, they confront their fates as they fulfill their duty to their world. Along the way, they'll find love, but death and betrayal lurk in the shadows, threatening everything dear to them.
Descended from the gods and warriors all, each Son's loyalty will be tested. Every action has consequences, and the choices they make now seal their fates. Alliances as old as the vampire world itself are reforged, and the Sons' duty is clear. Stop the Archons. Or die trying.

So what's Ramiel like? Well, of all the Sons, he's the most violent. He was born a Visigoth in the 4th century and was sold into slavery to a well-to-do Roman family. As readers will find out, he's never forgotten the feeling of being a slave to the whims of others. He's the biggest of the Sons also, standing 6'4" and built like a brick house. He has black hair and black eyes, but curiously, he has the face of an angel. But don't let that face fool you. He has a violent streak a mile long, and unlike Terek who kills out of honor and Saint who kills out of passion, Ramiel kills out of rage, making him a very dangerous vampire.

But since this is a paranormal romance in addition to being urban fantasy, readers will find this Son has a soft side too. It's just that whoever falls for him will have to break through barriers he's spent over 1600 years building. Ramiel may be defensive and angry, but he's protective of all he loves, and the female who has him by her side is very lucky indeed.

And now, readers can grab the first five chapters of Blood Prophecy for FREE! Find links and details at my website at www.gabriellebisset.com Thanks for having me here today! For more information on the Sons of Navarus series, readers can visit my website for excerpts, buy links, character profiles, swag (romance trading cards), and free desktop wallpapers to bring those delicious Sons to your computer. And look for Blood Prophecy coming soon! 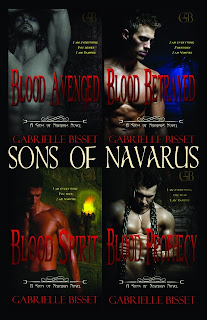 Thanks so much for having me here today to talk about Ramiel and his book!

Ramiels book is coming and i cant wait. his heroine is going to be a strong 1, i hope she gives him a hard time, the story is going to be so interesting with new characters

Loved the free preview. Counting the days until the release.