Giveaway, Guest Post, and Review of What's a Witch to Do? By Jennifer Harlow 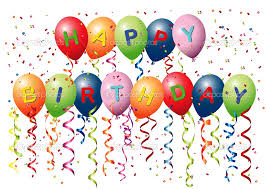 Before we get started, I wanted to kick off this post by telling our special guest Jennifer Harlow Happy Birthday!!!  She's on tour right now with her absolutely fabulous book What's a Witch to do?  I can't wait to share my thoughts on the book with you, but first we have an interview with Mona, our very special main character.  Take it away Jenn!!
The Witch of the South-Spotlight on Mona McGregor

Under the guise of writing a story about how to run a successful small business, I was granted an interview with Mona McGregor, propritress of Midnight Magic in Goodnight, Virginia. In truth I had gotten her name from Dr. George Black, head of the F.R.E.A.K.S. Squad, months before as part of a series of articles for Government Secrets Gazette, which is now defunct thanks to budget cuts. Hoping to blackmail or at least get a viable story, I decided to meet with as many supernaturals as possible before I, you know, got caught. Ms. McGregor was the last to accept the invitation. I met her at her two-story Victorian home in her modest yet comfortable living room. Here is a transcription of the conversation:

Jennifer Harlow (JH): Thanks so much for meeting with me. And the tea.
Mona McGregor (MM): You’re in the south now, hon. You step in this house, I’m duty bound to feed and water you, whether you like it or not.
JH: Well, I have always appreciated the kindness of stra—

Two little girls, one about ten and the other a few years younger, come barreling in from the kitchen. [I later learned their names are Sophie and Cora.]

Cora: Aunt Mona! Aunt Mona! Sophie won’t let me have some soda. Tell her I can.
MM: You’ve had enough sugar today. You’re about a sugar cube away from running to California Water only. And don’t disturb us again, okay?
Sophie: Yes, Aunt Mona.

The elder escorted the younger from the room.

MM: Sorry about that. Everything’s a drama. So, we better make this quick before they find more trouble. Ask your questions.
JH: Fair enough. You run a magic shop, Midnight Magic. How did that come about?
MM: I inherited it from my grandmother about ten years ago. It was opened over a hundred years ago by my Great-Great Grandmother Ramona.
JH: So, when you inherit the coven, you also inherit the shop?
MM: Excuse me? What coven?
JH: The one you’re High Priestess of. According to George Black, you have over a hundred witches under your tutelage. You’re the most powerful witch in America, if not the planet. I’ve even heard you could rule the world with one hand and bake a cake with the other all with a gorgeous smile on your face. Kudos.

The witch stared me down for a few seconds.

MM: You’re not here to talk about my store, are you?
JH: Actually I’m compiling a tome on supernaturals such as yourself. I just left Kansas after talking to a telekinetic F.R.E.A.K. I lied on the off-chance you wouldn’t talk to me. Sorry. But George can vouch for me. I’ve known him for years. I’m practically an honorary F.R.E.A.K. Call him. Or Jason and Vivian Dahl, or Anna West. I’ve met them all. Got their stories, now I want yours. Bet it’s a good one. So…from what George tells me, you can control the elements: earth, air, fire, water.
MM: [a long pause] Yeah, I’m a walking natural disaster.
JH: And you’ve been in charge of the coven since you were, what? Mid-twenties if I recall correctly. Quite a responsibility for someone so young.
MM: I’d been groomed to do it almost since birth.
JH: And you’ve lived in Goodnight all your life? Ever want to leave? Give the job to someone else?
MM: Never. Like I said, I was prepared from birth to do it. It’s why I was put on this earth. To help people, to guide them. It’s hard, yes, and sometimes I want to throttle these people, but I keep calm and carry on.
JH: You’re also one of the people in charge of the annual supernatural summit. I would think werewolves, vampires and witches wouldn’t get along.
MM: That’s why the summit is so important. It provides community. Allies. Support. When your existence is supposedly surrounded in secrecy, it’s hard to find people in the same situation as you. It can be quite lonely.
JH: I can imagine.
MM: I doubt it. [a pause] Anyway, we help each other when needed. Co-oporation. I even attend the pack Christmas party. When I’m brave enough.
JH: Yeah, they are an intense bunch.
MM: To put it mildly.
JH: Seems like you have lot on your plate. Shop, over a hundred witches, kids, taking on other supernaturals problems in the spirit of cooperation. When do you find time to sleep? Or date? [She just stared at me. Obviously a sore subject. I cleared my throat.]  So, can all witches manipulate the elements?
MM: Only a High Priestess. All witches can perform spells, create potions and charms though.
JH: What does it feel like when you perform a spell?
MM: Your body goes warm and it’s like your battery is being filled. Then when you release it, it’s like releasing static electricity. That’s all magic is really. Energy.
JH: Ever have any problems with people doing black magic? Raising demons and such?
MM: Not really. Most witches are pacifists. We’re about nature and balance. Violence upsets that natural balance. Goodnight hasn’t had a death by supernatural means in decades. [scoff] We’re not werewolves.
Cora: [in other room] Aunt Mona! I need help with my homework, and Sophie’s being mean!
MM: [rolling eyes] I’m sorry, I’m going to have to cut this short. We have homework, and dinner, and I have a ton of potions still to make not to mention my sister just got engaged so…
JH: No rest for the wicked, right?
MM: [standing] Something like that. I hope you got everything you need.

I stood and was escorted to the door.

JH: Thanks for your time. And the sweet tea.
MM: Just…out of curiosity. Who said that about me? The gorgeous smile and ruling the world thing?
JH: A good reporter never reveals a source, Miss McGregor. But I will say you may not think highly of werewolves, but one sure does think highly of you.

With a wink, I walked off her painted porch.

Let's take a look at the book: 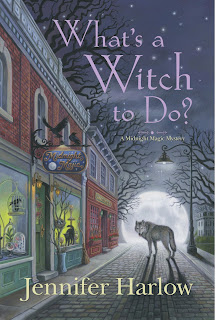 Mona McGregor’s To Do List: • Make 20 13 potions/spells/charms• Put girls to bed• Help with Debbie’s wedding• Lose 30 pounds before bachelorette auction• Deal with the bleeding werewolf on doorstep• Find out who wants me dead• Prepare for supernatural summit• Have a nervous breakdown• Slay a damn demon• Fall in loveWith her to-do lists growing longer each day, the last thing Mona McGregor—High Priestess and owner of the Midnight Magic shop in Goodnight, Virginia—needs is a bleeding werewolf at her front door. Between raising her two nieces and leading a large coven of witches, Mona barely has time for anything else. Not even Guy, the handsome doctor who’s taken an interest in her.
But now there’s Adam Blue, the sexy beta werewolf of the Eastern Pack who’s been badly hurt, warning Mona that someone wants her dead. Hell’s bells! A demon is stalking her, and Mona starts to suspect her coven members and even her own family could be responsible for it. With two attractive men and a determined demon after her, Mona teams up with Adam to find out who really wants her dead . . . and who really wants her.

Bio:
Jennifer Harlow spent her restless childhood fighting with her three brothers and scaring the heck out of herself with horror movies and books. She grew up to earn a degree at the University of Virginia which she put to use as a radio DJ, crisis hotline volunteer, bookseller, lab assistant, wedding coordinator, and government investigator. Currently she calls Northern Virginia home but that restless itch is ever present. In her free time, she  continues to scare the beejepers out of herself watching scary movies and opening her credit card bills.

This was my first experience reading a Jennifer Harlow book, but I can tell you this...it won't be my last.  This story was about Mona, who just so happens to be the most powerful witch in North America...possibly the world.  She is a perfect example of with great power comes great responsibility, considering she is responsible for over a hundred witches, keeping peace between all the supernatural factions, running a business, and caring for two adorable little girls.  With all of this going on, who has time for love?  Certainly not Mona..which is a real shame considering what a wonderful person she is.
The author did a wonderful job in the creation, not only of Mona, but of her whole world. She did an excellent job of sucking you into the story, because I could not put the book down once I got started reading.  The best thing about the story was that Mona was so realistic.  She had her insecurities and her bouts of anx, she just didn't let it interfere with her day to day life.  She kept on trudging through her to do list and tried finishing them up each and every day. I liked the little twists having to do with the lists.  It was cute and creative.
I liked the story-line, the characters, the plot, and the world.  This is going into the re-read pile, because I definitely would like to visit it again and again. I'm hooked and can't wait for another chance to visit this author's world again.  Excellent Read!!!

No you have a chance to experience for yourself the amazing world of Jennifer Harlow.  Just rafflecopter below for your chance to win!!  Good Luck!!
a Rafflecopter giveaway

Sounds like a really good read!!
Thanks for the chance to win!

Happy Birthday Jennifer and congratulations on releasing a new treat for me to read - oh wait this is not about me - cough, um, well I certainly enjoyed the interview and really cannot wait to read What's a Witch to Do? and wish you every success and joy. :)

Happy Birthday. congratulations on what seems like a wonderful and fun read!

Thanks y'all! Enjoy the book!

Many wishes for a great Birthday and congrats on the book. I am excited to read it. It sounds like it's going to be a ride to remember. And I love the cover.
koonie2888 at yahoo dot com

Happy birthday & thanks for the giveaway!

happy b-day to Jennifer :)
enjoyed the interview & the book sounds interesting w/ have to look into it & see about adding it to the wish list. thanks for the giveaway.

A great giveaway for a birthday. Thanks!

Good wishes for your birthday. Thanks for the fun interview and giveaway, I am looking forward to the book!

Happy Birthday Jennifer! Thanks for the fun interview and giveaway,

Congratulations. Too bad this one is US only. I would dearly love to read this.

Happy Birthday and Congrats on the new release! I love these interviews. They always seem to bring even more life to characters. Mona sounds like she has her hands full. I'm looking forward to reading What's a Witch to Do and seeing how she handles all the chaos and dangers.