Giveaway and Teaser of For Queen and Country 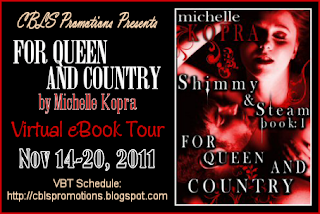 Good Morning my avid readers!  Today I am pleased to bring you not only a sneak peek inside this yummy tidbit, but also a chance to win your own copy!!  Lets take a look at the details!!! 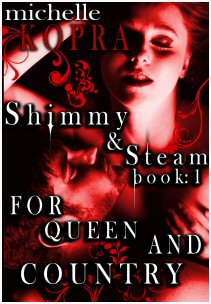 BLURB:
Sparks of lust fly between the queen’s military advisor Lord Colin Mandrake, and her chief spy aboard The Gypsy, Lady Constance of . However, no matter how good the sex is between them, and Colin butt heads over who is in charge of the mission to capture the sultan Khalid Bin Bargash. Can Colin win over her heart, and can teach Colin who is boss?
EXCERPT:
“Shush!” leaned closer to the speakers. Petyr’s voice disrupted by static as the wind once more it broke into the tent. “The captain couldn’t land The Gypsy in this wind, and we need to be on the ground to get decent reception.”
“Argh. Get on with it, Petyr.” Lilly shivered again as she watched him on the sepia-colored screen.
Standing in the corner of the hall, the raised platform made him appear taller. His hair was slicked back, and mustache twirled upwards. His black eyes scanned the crowd in the imperial winter palace and held his arms up dramatically.
“Hush.” tried to appear calm. “This is his first time out. He’s doing just fine.”
“His imperial majesty the Tsar Alexander, I give you the mysterious, the enchanting – La Seraphine!”
took a drag of her honey-flavored cigarillo. On the screen, the center of the hall lit up, illuminating a small elegantly decorated tent. Gold coins shimmered along the edges, pulsing to the beat of the drums. The music rose in tempo and drapes slowly opened. From within, long bare legs appeared in a suggestive pose.
took another nervous drag. A collective gasp rippled through the court. A shapely leg curled around the drape. The music paused. When it began again, the seductive sounds of the oboe joined in. The beat slowed down, the dancer twisted her legs to the music. Twirling hips, rolling curves, and nodded with relief as the Tsar leaned forward.
“She’s got his attention.”
The Tsar lifted a monocle. Even on the sepia screen, the shell around the lens glowed with an unusual green light.
“Is that what we’re after?” Lilly adjusted brass knobs on the panel to get a clearer picture.
“No, the boss lady wanted Sera to place a listening device.”
The music built to its peak, pausing as the court held their breaths. With a crash of the drums, the fabric of the tent billowed to the ground like wings of a butterfly. The lovely Seraphine exposed.
Silence filled the hall as courtiers took in the sight. A headdress of coins shimmered over her honey locks. She stood in a pose, one arm over her head, and the other resting at her knee. With a flick of her wrist, gold coins jingled on her head and chest as the music began again. The beat quickened to match the speed of her shimmying hips.
The crowd remained breathless as she twirled. Hair and sheer fabric spun around her. Long legs descended off the platform taking steps as her hips curved forward. She reached the seated group, a veil, matching the fabric of her skirt appeared in her hands. Swaying to the music, she lifted the veil over her head and rolled her hips side to side until she inched closer towards the Tsar with a seductive smile.
More than one guard stepped forward, weapon at the ready to stop the dancer. However, the Tsar with a sheen of lust on his face waved them away. Seraphine danced, letting the fabric of her skirt sway against his legs.
Neither the Tsar nor his guards heard the frantic voice piped through a jeweled bit of earring.
“Abort!” shouted, cigarillo lying forgotten on the ground. “I repeat, abort. The boss lady has called off the mission and is summoning us home. Return to camp immediately.”
saw bewilderment on Petyr’s face, but couldn’t give her operatives any more information over the earpiece. Behind her, a flurry of activity kicked up when the ticker tape came through the makeshift console.
Petyr slid out of view of the console. However, Sera continued to dance for the Tsar.
“Dammit girl, get out of there,” muttered.
But Sera did not leave. Instead, her veil spun again, making it flutter around her. As she spun in front of the hidden camera, she waved the hand signal for–Plan B.
BUY LINKS:
Smashwords - http://www.smashwords.com/books/view/94175
Amazon - http://www.amazon.com/Queen-Country-Shimmy-Steam-ebook/dp/B005TVPAB4/ref=sr_1_1?ie=UTF8&qid=1320267710&sr=8-1

ABOUT THE AUTHOR:
When not tending to every whim of my kids, cats, and hubby- I am writing stories about elves, airships, and witches. I can be found lurking on Facebook at: http://www.facebook.com/#!/profile.php?id=100003007949168
LOL!!  This book sounds excellent!!!  I know I know...How do I enter to win a PDF copy of this great book?  Simple...Just be a GFC follower and leave me a comment with your email address!!  Be sure to check out the rest of the tour for more chances to win!
Nov 17: An Open Book (Excerpt/Giveaway)
Nov 18: Reading Romances (Excerpt/Giveaway)
Nov 19: Romance Lives Forever (Interview/Excerpt)
Nov 20: Book Bags and Cat Naps (Interview/Excerpt)
﻿

This sounds yummy! Thanks for the giveaway!