After reading the wonderful story that Lisa has written I would definitely have to say....oh sooooo naughty!!!  But before we dive into this great piece, she has offered up to one of my readers an e-copy of her book The Heart of War.  Let's take a peek! 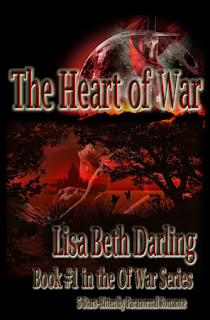 Meet Ares God of War, the greatest Warrior the world has ever known. He's moody, grumpy, dominant, ravenously sexual, and above all, built like a Greek God.  Suspected of killing his Daughter in-Law, Psyche, and long in exile from Olympus, the solitude of Ares' secluded Greek Isle is interrupted when Magdalena MacLeod a plucky little Fey washes up on his shore after believing she's been shipwrecked. It's not mere fate that has brought the unlikely couple together yet it may be what tears them apart.
Branded with a golden chastity belt bearing the mark of Cernunnos, Celtic God of the Forest and Death, Alena has been on the run from her husband the Great Horned God for 200 years.
When the Olympians discover her presence on Ares' island, they send Apollo to the island while Ares is away with orders to bring her to Olympus. With nowhere to run, she strikes a bargain with the God of War--her virginity for his protection.
Ares sees a sweeter deal; her in his bed and himself back in his rightful place on Olympus among the Gods. If it means turning Alena over to Zeus afterward, well that's of no consequence to him...is it?
After Alena proves herself to the God of War in battle and in his bed, Ares must choose between his Divinely Dysfunctional Family, his pride, and Alena.
Get lost in this sweeping dark saga of lust, rage, revenge, and redemption. Battle Ancient Gods while falling in love with Ares God of War and Alena MacLeod. They share a love that will rock the world from the heights of Olympus to the Celtic moors.
The Heart of War contains scenes of graphic sex and violence. As such, this novel is intended for ADULTS ONLY it is NOT recommended for the Faint of Heart or for the Harlequin/Avon/"Twilight" reader.

I'm totally jealous!! This sounds like an awesome read!! To be entered all you have to do is comment on what you thought of the story, with an email address, and of course be a follower. Now lets dive into one of my favorite time periods with a super sexy read!!

Thank you so much for doing this for me! It looks GREAT!

Are you kidding...I think it sounds GREAT! I'd LOVE to win this book! Happy holidays!

Great excerpt. I love mythology so I can't wait to read this book. Wow! Ares is hot. Thanks for the chance.

Thanks for the excerpt!

Awesome excerpt !Thanks 4 the chance :)

Thank you for this great giveaway!! I follow under
amymccarty1985
amymccarty@hotmail.com

I still am trying to win this book! Please, oh, please, let this be the one!!
MJB
msmjb65 AT gmail DOT com

Heard so many good things about the books. Would love to read them.

I enjoyed the excerpts too. Thanks so much for the opportunity to win and much success in all future writing endeavors.

I'm a GFC follower and here's my e-mail ketadiablo@yahoo.com

This book sounds fantastic! Anything that's not for a "twilight reader" is always right up my alley!