Naughty by Mistletoe with Ruth Madison

Yessss!!  I finally made the list!!  LOL!!  Here with me today I have Ruth Madison and her naughty story for your reading pleasure.  Ruth's story is off of one of her books.  Lets take a look: 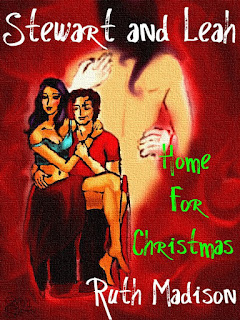 Stewart is bringing his sexy new girlfriend home for Christmas and his family doesn't approve.

"I just read it and it gave me tingles. You must be doing something right!"
LOL  there are some links after the story to check out Ruth and her works!  Take it away Ruth!!
From Stewart and Leah: Home for Christmas...
Christmas morning Stewart woke when his door creaked opened and Leah was standing there, the sun from the kitchen window shining behind her and giving her the glow of an angel.
“Hey there, stud,” she said, her voice still thick from sleep. A silky white nightgown clung to her curves and threatened to slip from her shoulders.  She raised one hand and Stewart laughed when he saw that she was holding a decorative ball of mistletoe.
She walked to the bed and held it over his head.  When she bent to kiss him, her breath smelled of coffee and hazelnuts.  He grabbed her around the waist and yanked her into the bed where she fell against his chest, giggling, and the ball of mistletoe dropped to the floor with a dull thud.
He ran his hands over her smooth gown, then pushed it up and warmed his hands on her skin. Her fingers trailed down the side of his face and stopped at his lips where he kissed the tips. She let out a small groan and closed her eyes.  Stewart pushed his hands up over her hips and yanked her lower body closer.
Her knees on either side of his head, the beautiful folds of her pussy were right in front of him. The lips were swollen and pink, and they parted open welcoming him. Stewart latched his mouth over the hard little peak of her clit and sucked against her skin. Leah leaned back and moaned a deep guttural sound.
While he pushed his tongue against her, his hands came around her hips and his strong fingers massaged her smooth-shaven mound. Harder and faster he danced his tongue and his mouth filled with the sweet honey taste of her body.
Her knees tightened against his head as the muscles in her legs tensed, ready for release. Stewart slowed down, using the suction of his mouth to pull hard on the skin around her clit, drawing it out from her body. Little cries escaped her lips. In the heat of the room, Stewart could feel how close she was.
He gave her what she wanted, licking in a steady rhythm until mini spasms shot down her legs and her pussy exploded with heat.  She dropped her arms and fell back against his legs with a huge sigh.
Stewart took one of her hands and squeezed it. “Merry Christmas,” he said.
Read the whole story for 99 cents at Amazon or Smashwords!
http://www.amazon.com/dp/B006M3C2XC
http://www.smashwords.com/books/view/114406