For those of you just joining us I have another spectacular giveaway going on right here Naughty or Nice? 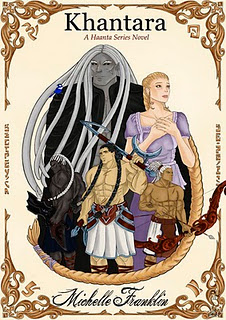 Our Haanta Queen is back on my blog for another go round.  He latest novel Khantara, is the first stand alone in the Den Asaan's series.  I have a sneak peek inside the book with all the details!!  Let's take a look!!

Blurb:
Khantara tells the story of the Den Asaan's father and mother, how they met, how Khantara saved Anelta's life, and how their secret bond was threatened by impending war. It is the first stand-alone novel in the series.

From Chapter 4
The instant Khantara began to walk the short path to the barracks he was attacked by swarms of wrens and sparrows from the nearby willows, all of them in a flutter to have their turn to speak to the gentle mountain. The owls and nighthawks had taken his evening and now it was only fair that they should have his morning to themselves. He must hear of their new nests and warbling chicks and horrid neighbors, and they were going to claims their perches on his head and shoulders and tell him whether he wished to listen or to ignore them accordingly. He would listen, however; the quick and nervous conversation of the sparrows was often one-sided and he was therefore required to do nothing but allow them to nest in his hair and continue walking. The wrens, however, were lest content to permit him to be indifferent: they would have him hear of every rude caterpillar and impudent butterfly flitting around trees they knew to be theirs. Theirs was a talk of territory, and they would have Khantara understand their plight. It was wrong of the caterpillars to climb their trees and enter theirnests, and it was so devious of them not to be edible though their bright colours and squirming movements were so enticing. How horrendous it was that the bustle and brilliancy of the butterflies’ wings should be so fascinating. They could hardly capture the creatures to feed to their chicks with such a violent display of beauty. Would only Khantara tell the caterpillars to taste more agreeable, the obnoxious moths to make their cocoons somewhere else, and the owls to leave the worms alone when there was mice enough for them. Khantara, however, would say nothing to the purpose. He only smiled and shook his head at the wrens, and their loud and intricate trills conveyed their indefatigable displeasure toward the giant’s infuriating civilities. He would let nature go its own way, and the birds could do little to convince him otherwise. The wrens threatened to claim strands of the giant’s long molded locks for their nests if he did not comply, but he would not regard their threats as any so troublesome. He simpered at their attempts and silently declared that they could not break his draping tendrils no matter how hard they should try when the giant suddenly found himself at the barracks.
Doesn't this just sound great?  I thought it did!!  Michelle has kindly offered an e-copy of her latest and greatest!!  All you have to do is be a follower of my blog and leave a comment with your email address to be entered to win!!  Good luck to you all!!

I loved The Commander and the Den Asaan Rautu so definitely sign up for this giveaway and thanks. Congrats on Khantara! Loved the excerpt!

I really like the world in this story. It sounds intriguing. Thank you for the giveaway.

I love the Den Asaan series and would love to learn more about this awesome world! Thanks so much for the giveaway:)
GFC follower
jwitt33 at live dot com

I have recently discovered this series and it sounds great. I look forward in reading it and Michelle's other works.

sounds great and I'd love to read it over the holidays!

Please do not enter me- I'm reading this book now. I love the Haanta books. Glad to see it posted.

I agree, it sounds great. Thanks for all the chances to win.
luvfuzzzeeefaces at yahoo dot com

Thanks for the international giveaway!!