Hello and Welcome Gabrielle Bisset fans!!  Have I got a special treat for you!!  Not only do you get to take a look at her newest naughty vampire release, but you also get to take a dip inside!!!  Gabrielle has picked a steamy scene just to make the book all the more enticing!!  Let's jump in! 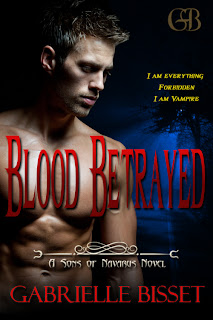 Blurb:
I am everything forbidden.  I am vampire.

Haunted by betrayal, Saint hides in the human world, giving his heart to no one and finding the only solace from his past in the arms of human women. Now as the Archons begin their takeover of the vampire world, this Son of Navarus has been marked for death.

Summoned to defeat the Archons by the world that shunned him, Saint must face his past and Solenne, the woman he loved and lost a century ago, for only in accepting her will his body and soul finally find salvation.

Excerpt:
"Solenne," he said almost in a whisper to not startle her, but it didn't work. She spun around with her arms covering her full breasts that strained against the thin fabric of her tank top, but she couldn't cover the bruises along her collarbone and across her shoulders.
Obviously inflicted that night, their redness had begun to fade to a deep purple where fingers had pressed roughly into her tender skin. Solenne saw the look of shock he didn't try to hide from his eyes and scrambled to grab a shirt from the back of a nearby chair.
"What is this?"
"Nothing. Just leave it be."
Saint took the shirt from her hand and threw it on the bed. "No." Dipping his head, he softly pressed his lips to the darkest bruise on her left shoulder. Fucking Archon!
Gingerly, he ran his fingers over her skin, gently touching each bruise before raising his head to look at her.  "Solenne, I promise you here and now I'm going to kill the one who did this. I'll drain him drop by drop until he begs for the release a stake will bring."
Eyes wide with tears looked up at him, their blue color pale and watery. "Saint, don't touch me like this if you don't mean it."
He meant it. He'd meant it in every dream he'd had of finally returning to her. Taking her face in his hands, he kissed her long and deep, drinking in the delicious taste of the lips he'd missed for so long.
God, he'd yearned to once again feel the touch of her skin next to his! Year upon year of lonely nights interrupted only by pale replacements ebbed from his memory now as his hands once again learned of the woman he'd always loved.
Solenne molded to him, setting his senses ablaze. His body craved to join with her, to finally reclaim that piece of his heart lost so painfully nearly a century ago. He slid his hands under her shirt to her breasts and worshipped them—their fullness in his palms, their deep pink tips pebbled from desire that begged for his mouth's attention.
"Come."
Taking her hand, he led her to the shower. "Don't move." A quick twist of the faucet handle and warm water streamed down from the showerhead.
"Do I look like I need a shower?" she asked in a teasing tone as he slipped the tank top over her head.
Saint looked down at her sexy mouth as he slid his thumbs under the waist of her shorts. "Always fighting me."
Crouching in front of her, he slid the shorts down her legs and off her feet. Eye level with her pussy, he looked up and licked his lips. "I hope you don't plan on fighting me now."
He didn't wait for a reply before he drew his finger up her wet slit. Solenne's eyebrows knitted and she bit her lip. Her eyes slowly closed and tiny moans filled his ears.
"Don't close your eyes. Watch me."
Solenne obeyed and her eyes grew wide as he slid his thumbs through her delicate folds to open her up, unveiling to his eager eyes her excited clit. Saint inched closer to her soft skin and whispered against her, "I've waited so long for this."

Thanks so much for helping me celebrate Blood Betrayed's release day!