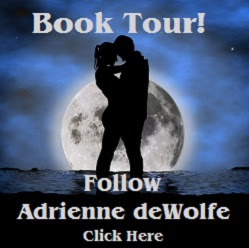 Hello and Welcome to this stop on Adrienne's tour!!  Today she is talking to us about the 20 tips for writing a lovable romance hero.  This is a big one because frankly, we love our main squeezes.  Let's take a look at what she has to say:

Readers of Romance novels want their heroes to be role models or larger than life.

Romance novels are fantasies, and the reader wants to escape into a world where she can experience the thrill of falling in love with a man who, in real life, might be the tiniest bit too scary to date because he’s so bold, handsome, sophisticated, powerful, witty, rich . . . You get the idea!

Perfect people make boring characters. The essence of all fiction is conflict; that’s why Romance novel editors often advise aspiring authors, “Sparks have to fly between your hero and heroine!”

When your Romance characters first meet, they are going to be antagonists. (Surprise!) Your job is to develop the relationship slowly so that the reader can believe that these two antagonists are falling in love.

A hero needs more than brawn to satisfy your reading audience. In fact, in polls conducted by Romance Writers of America, readers often rank intelligence and humor as the top two traits that they prefer in their Romance heroes. On a scale of 1 to 10, “physical attractiveness” often ranks dead last!

So how do you strike that elusive balance between brain and brawn, sass and class, emotional caring and physical chemistry, that will make a reader fall in love with your novel’s hero?

In my ebook series, The Secrets to Getting Your Romance Novel Published, I help writers master the techniques that will help them get their novels published. The following 20 tips are just some of the great ideas you’ll find in Book II of the series, How to Write Romance Heroes with Sex Appeal.

1. You let him embrace new challenges or activities. (Example: For the heroine’s sake, he attends the season’s opening night performance of the local symphony, even though the reader knows the hero would rather be country western dancing at the state Rodeo.)

2. You prove that he’ll be a good caretaker. (Example: He romps through the park with a puppy.)

3. You reveal his protective nature in a positive light. (Example: He chides his 17-year-old niece for sneaking out of the house to attend a neighborhood party where there are no adult chaperones.)

4. You give him an optimistic outlook. (Example: When everyone else is grumbling about the weather, he whistles to himself, pleased to think that he’ll soon have new flowers growing in his garden.)

5. You continually reveal his deepening admiration, respect, and love for the heroine. (Example: The first time the hero meets the heroine, he thinks her physical appearance is plain. As he grows to care about her, he can’t imagine why he didn’t see her beauty before.)

6. You make him act with kindness and compassion toward his staff or the working classes. (Example: He gives his secretary time off, with plane fare, to visit her ailing mother.)

7. You challenge his integrity, and he comes out smelling like a rose. (Example: He has the option to fib about his age in a dating chat-room. Instead, he reluctantly tells the truth and wins a date with the heroine.)

8. You produce evidence that he is well-liked and well-respected by his colleagues, subordinates, family, friends, etc. (Example: his nieces claim that he gives the best “horsie” rides.)

9. You give him a social cause that women can respect. (Example: he plants trees to help “green” the neighborhood.)

10. You make his rival grudgingly acknowledge one of his positive traits or talents. (Example: Mr. Rival admits that the hero is too honest for his own good.)

11. You reveal his resourcefulness, especially in stressful situations. (Example: The heroine drops her keys down the grate and is frantic about getting to the airport on time. Mr. Corporate Lawyer hot-wires her car.)

12. You give him a drop-dead gorgeous smile that makes up for thinning hair or an oversized nose.

13. You show that he respects women. (Examples: He is especially careful to teach his daughters to love and respect their bodies; he encourages his lady friends to stretch their wings when they’re afraid of taking business risks.)

14. You paint him as generous. (Example: He surrenders the last piece of cherry pie to his sister’s bratty kid.)

15. You show that he can keep a secret. (Example: At a party, the heroine professes that she baked the lasagna herself; he furtively peels the Deli price tag from the bottom of the dish.)

16. You create a small but endearing idiosyncrasy for him. (Example: his junk drawer contains a mysterious, three-inch stack of chewing gum wrappers bound by a rubber band.)

17. You show that he’s conscientious. (Example: Even though he has driven half way to work, he turns the car around because he remembers that he forgot to feed the dog.)

18. You make him classy and sophisticated, capable of mingling with aplomb in almost any crowd. (Example: Despite his New York accent and his Wall Street hair cut, he has no trouble making friends at the Cajun Crawfish Boil.)

19. You reveal his tolerance for other characters’ faults or idiosyncrasies. (Example: He chivalrously walks his eccentric neighbor home in the dark, because she claims that she’s afraid of low-flying bats.)

20. You make him grow as a character, and therefore, as a man. (Example: At the beginning of the novel, he was intolerant of the heroine’s overprotective mother. By the end of the novel, they are chatting cozily over coffee – much to the heroine’s bemusement.) 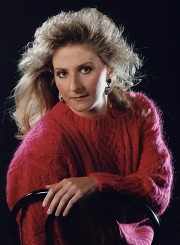 Adrienne deWolfe is teaching the 8-week, online course, How to Write a Romance Novel That Sells, beginning May 21. Her five historical Romance novels have earned 9 writing awards, including "The Best Historical Romance of the Year." Adrienne’s in the midst of a book tour to celebrate the release of How to Write Wildly Popular Romances, and she is raffling a free professional story critique at her website, WritingNovelsThatSell.com. Follow Adrienne on Twitter, Google +, and Facebook. 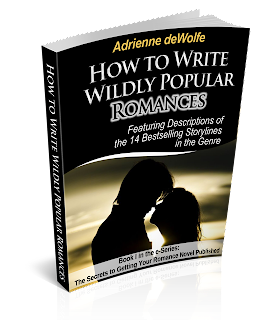 Don't forget that she is also raffling off a free critique!  Check out the details here:
http://writingnovelsthatsell.com/may-raffle-story-critique/

Thank you so much for hosting me on your blog! I appreciate all that you do for readers and writers!