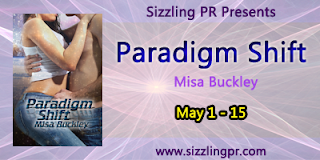 Hello my lovely naughties!!  Today I have Misa Buckley with me, who is kicking off her tour on my blog, and she is going to talk about why she chose a shape-shifter in her sci-fi book.  Its an unusual choice, as most sci-fi books kind of center around technologically enhanced humans and of course aliens.  But they don't usually shift.  Afterwards we are going to take a look at her book and give you a chance to win it!!!  Take it away Misa:


Shapeshifters in Sci Fi
When people hear the word “shapeshifters”, most think of werewolves. They certainly seem to be a staple of the paranormal novel. But other shifters exist. I suppose if I’m being truly pedantic, Transformers are shapeshifters – after all, they shift their shape. What more basic definition is there?
Shapeshifters do exist in science fiction, but they are few and fair between, which I think is a real shame. They offer such great possibilities. Not just as potential enemies, like the T2000, but also as allies.
Yet sadly, the only example I can think of where a shapeshifter had a major, recurring role is Odo in Deep Space Nine. Not even my dear favourites Stargate and Farscape had them, though Stargate Atlantis did have the human form Replicators.
When I started writing PARADIGM SHIFT, I knew that I wanted my alien to be able to shift. It’s a defence mechanism of his species, though used to a negative disadvantage by a parasitic race. Therefore it’s both a blessing and a curse.
But why a shapeshifter? Because it is a rare thing in sci fi. Oh, there are versions of it, like Avatar, but not true, shift-able characters. It’s an under-represented side of the genre, and I really feel that authors should shake off the fantasy/magical connotations and invent their own.
A Little Bit About Misa:
Misa grew up fascinated by space and its possibilities. She wrote her first novel in 2007 for NaNoWriMo, and while she didn’t finish it she was bitten by the writing bug. PARADIGM SHIFT is her second published story, with her first, IRONHAVEN, published in 2011 by Decadent Publishing.
Now contracted with the Champagne Book Group, she has a Steampunk Paranormal out July 2012 and an “Urban Sci Fi” out March 2013. She also works at Champagne as a cover artist.
When she’s not writing (which is rarely), she can be found herding her children, chasing after her husband, or watching her favourite shows on TV. She can be found on Twitter as MisaBuckey and the quickest way of getting her attention is to mention Cliff Simon.
Now let's take a look at her book: 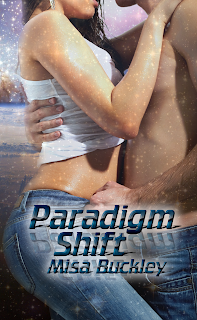 Observatory tour guide Megan Shaw has always had stars in her eyes, so when she all but runs down the otherworldly Raul, she barely blinks. It doesn't hurt that Raul is hot - whether in his human form or his natural one - and that there's an immediate mutual attraction.


But Raul is on the run from his alien overlords and soon Megan finds herself fighting against a foothold situation with nothing more than a couple of cattle prods and Muse for soundtrack.


However Earth is not the only planet at risk and with his species desperate to escape generations of oppression, can she really trust Raul? Or will his loyalties shift as easily as his physical appearance?
I think this sounds like an amazing read!!!  For your chance to win a copy, just fill out the rafflecopter!!!

Thanks for having me along, Nikki!

Woo hoo, can't wait for it to come out!

Most shifter books I have read have been pretty damn good. Not sure I can pick a favorite. I do tend to lean towards wolf shifters though.

Congrats on the release, Misa! I do not have a favorite shifter, I fear. Have not thought about it and can't manage it until my brain comes online this morning. LOL! But very excited for you!

I love dragon shifters. They are mysterious, strong, and can fly.

This book looks very interesting. I will put it on my wishlist.

I don't really have a favorite shifter. I like them all.

Any Shifter Really Im Not Picky As Long As They Are Hot.

Wow! This looks so cool and different. Yay for different!!
Congrats. I'd like a copy, pretty please?? :))

Oops! I wrote my blog post before reading the question in the Rafflecopter! I generally like the wolves because they're such Alpha males/females whether they're furry or not!
MJB
msmjb65 AT gmail DOT com

The first shifter books I read were from Autumn Dawn. The shifters were called the Haunt. They are wolves. I fell in love with Keilor. I love the sensuality, the sexiness, and the alpha. I think I may be due for a reread.
Mel
bournmelissa at hotmail dot com

I love all shifters but I'll always have a special place in my heart for good old werewolves :)

My favorite was Coyote or ThunderBird, because i read Patricia Briggs novel and i like them:)

I love all the different shifter books but if I had to choose one over the others I guess I'd say wolfs...