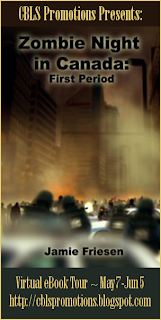 Welcome to my stop on Jamie's tour!!  I am pleased to be hosting the book and offering you a chance to win a copy!!  Let's take a look at the book details: 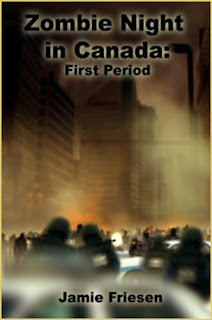 Tokyo. Sydney. Beijing. Cairo. Paris. Rome. New York. Los Angeles. One by one, the world’s great cities fell to the zombie plague. What chance does a small, non-descript city in Canada like Edmonton have?

The world as we know it is finished. Civilization has collapsed and humanity is on the brink of extinction. Billions of people are dead, victims of a horrific plague.

Bi-weekly paychecks, Tim Horton’s double doubles, men’s league hockey and cheap winter vacations to Cancun. That was the life Xander Barnes had known for years until a pandemic swept the globe. Efforts to slow its spread or develop quarantine zones, in many cases were too little, too late.

Nowadays, life consisted of avoiding the plague victims, ghouls who had an insatiable appetite for human flesh and finding enough food to survive day to day. How long can one ordinary man survive in a world gone mad?

“Gentlemen, it’s going to be a race to get to the cars, so I suggest you hurry. Larry and Greg, run to the Sheriff’s office and see if there is more ammo and maybe some working flashlights. We’ll meet you at the ramp by the fountain in one minute,” Darryl said. “If you’re not there in time, we’ll leave you behind. Got it?”

Just then the doors to the Bowker Building opened again and dozens of infected streamed out. The two groups raced off. John and Darryl reloaded as they ran and got to the stairs, hiding behind a planter filled with sub tropical plants, with the older men a dozen steps behind them. Sunlight poured in from a skylight and illuminated the area. Greg glanced out the windows and saw that the Legislative Grounds were filled with dozens more infected. When the old men had finally caught up to them, they raced down the stairs. John tossed a table onto its side and shoved all three of them behind it.

Larry and Greg followed Darryl’s orders and raced into the office. Greg ran into the back room and fired his pistol twice into a locked cabinet. The lock shattered and he ripped it open, pulling out a pair of pump action shotguns. He loaded shells into each and stuffed more in his vest pockets. He stuffed several pistol magazines in as well and scrambled back out to the front office, where Larry was tearing a desk apart looking for batteries.

“I can’t find any!” Larry hollered.

“Forget the batteries, let’s get going!” Greg yelled, grabbing a jacket off a nearby chair and threw it on.

Greg tossed a shotgun to Larry and jammed the half empty box of shells into his hands. Then he tore out the door without another word. Larry pulled one last drawer open and yelled, “Jackpot!” He stuffed a couple packs of batteries into his over-sized pockets and followed Greg out the door, tossing on a heavy jacket as well. A second later, Larry heard a shotgun blast. As he ran out into the hallway, he saw Greg standing there, firing his shotgun into a huge group of infected, blood and flesh exploding from the lifeless victims.

“This way,” Larry shouted and raced for the ramp that spiraled down to the lower level. Greg followed, and they took turns, running and firing, covering each other’s back whenever possible. They made it to the bottom of the ramp and saw John and Darryl firing into a group of infected, coming down the stairs that were located at the south edge of the ramp. The premier and cabinet ministers huddled in abject fear only a few feet away.

The infected from the Bowker Building were coming down the ramp and Larry turned and fired at them. In the narrow confines of the ramp, every shot finished off several infected, but their numbers suddenly seemed limitless. Dozens, if not hundreds, poured down the ramp from the ground floor.

Darryl’s pistol’s slide jacked back as the magazine emptied. “Did you find us any ammo?” he screamed at Greg.

Greg tossed over all four of the magazines he had found. Darryl shoved one in and resumed firing. Suddenly the way was clear.

He grabbed the premier and then both he and John raced down the tunnel towards the parking lot. The two cabinet ministers followed in their steps, with the two young sheriffs firing into the ever expanding pack of infected. A door to the Legislative Annex on their left from opened, and more infected flooded into the hallway as they ran past it.

“Sir, run for the end of the hallway!” John yelled. Charchuk and two cabinet ministers continued down the darkened tunnel.

John and Darryl stopped and fired point blank into the infected.

“Last magazine, make ‘em count!” Darryl said over the gunfire to John, as he passed him a magazine. John nodded.

“Greg, Larry, come on!” Darryl shouted, as the sheriffs were on the verge of being cut off by the host of infected flowing from the Annex. They ran backwards and stood shoulder to shoulder with Darryl and John. Natural light from three periscopes flooded the hallway with an eerie light, adding to the emergency lights mounted on high on the walls.

John and Darryl fired again and again until both were out of ammunition. Darryl’s gun clicked on an empty chamber. He glanced around, looking for something, anything to hold off the infected. He ran to several nearby display cases, marked ‘Alberta Legislature’, which had a display about the provincial government. One cabinet was stuffed with replicas of both the Legislature’s mace and several medieval-era battle maces, and he smashed the glass with butt of his pistol. He jammed the pistol back into its holster and reached into the case, pulling out a pair of wicked looking maces and leaving the gaudy, gold-painted Legislative replica behind.

He ran back to John and gave him one, then attacked the infected reaching for him with an over-handed swing. The mace came down and crushed the infected teenager’s skull, sending blood and brain matter in every direction. John emulated him and they cut a bloody swath through the infected. The young sheriffs, also out of ammunition, were now using the butt end of their shotguns like clubs to fend off the infected.

They fell back slowly, responding to any attempt by the infected to get around them. Bit by bit, they were moving closer and closer to the parkade.

“...Zombie Night in Canada is a fresh breath of rotting zombie corpses and gunsmoke. It has great action, a uniquely Canadian outlook (but not too Canadian as to alienate reads who don’t hail from the great white north) and great detail and an all-round exciting story. Best zombie novel I’ve read in some time.”

“Like Zombies? Like Guns? Like Canada? This book has them all. Infected Zombies are once again on the march. The plot revolves around the events surrounding an exponential zombie outbreak as it happens to the main protagonists rather then a story where they "wake up" to a world already overrun. The book is set mostly in Canada, especially Alberta with real world locations & references and contains good specific military weapon usage to help draw you into the story. Fans of the genre will appreciate the many references to other contemporary zombie stories including what I saw as a direct homage to the Dawn of the Dead 2004 remake.”

Jamie Friesen was born in Lahr, West Germany while his father was serving with the Royal Canadian Air Force. He attended the University of Alberta where he obtained a Bachelor of Arts in History, and followed it later with a Masters of Arts in Communications & Technology. After obtaining his Bachelor's degree, Jamie went abroad and taught English in Japan and Taiwan.

He now lives in Edmonton, Canada with his wife and daughter, working in the Public Relations field and writes in his spare time, which usually translates to early mornings and lunch time.

So to for your chance to win a copy, just fill out the rafflecopter!!  Be sure to check ou the rest of the tour here:   http://cblspromotions.blogspot.com/2012/05/vbt-zombie-night-in-canada-first-period.html.    Good Luck!!!
a Rafflecopter giveaway

Thanks for featuring Zombie Night in Canada: First Period!

I don't really have a favorite Zombie series. In fact, I don't think I have ever read any zombie books that are part of a series.
Thanks for the chance to win.

Favorite zombie series would have to be The Newsflesh Trilogy by Mira Grant!!

I have never read any zombie books so this will be my first.

I haven't read any zombie books but I have been looking at A zombie series by Olivia Starke....real interested how they could make a zombie book work.

I don't really have a favorite zombie series, the vote is still out, but this book certainly looks intriguing and I would really like to read it.

I liked the first White Trash Zombie book by Diana Rowland and Working Stiff by Rachel Caine both of which are different from the non-sentient zombie/post apocalypse type book.