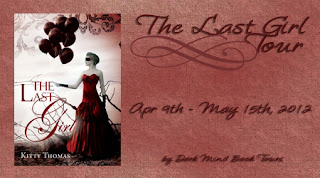 Welcome to this stop on The Last Girl Tour.  It has been my pleasure to review this book and offer up my opinion.  I've always had a thing for dark vampires, because the true be told they are predators.  Even though they may or may not have the capicity for human emotion, it still leaves the majority of their very essence dripping on the animalistic side.  You can check out the rest of the tour here: http://darkmindbooktours.blogspot.co.uk/2012/03/now-scheduling-last-girl-tour.html  Let's take a look at the book:

Six years ago strangers broke into Juliette’s house; she was home alone and only thirteen. She kept her eyes closed, praying that if she didn’t see anything, she wouldn’t be killed. No one harmed her. In fact, one of the thieves protected her. Now Juliette’s dreams are haunted by him.

Christian has waited to take her, resisting the urge each night. It always ends badly with human pets. They’re too fragile. The longer he can wait, the better, because the moment he takes her, the clock on her life starts ticking down.

Then she’ll be gone forever.

Warning: This book is dark erotica meant for a mature audience only.

Somewhere in the mist of the romance associated with vampires and their undying love, we choose to forget that everything about them is shaped to be the most deadly of predators.  Everything about them, their smell, their beauty, their charm, their speed, their strength, the seductiveness is meant to draw you in for an easy kill.  Because let's face it, humans would be easy prey.  If they existed there would be a never-ending suicidal train of humans longing to be Vlad's  Elisabata.  Male and female..lol.  To me it would make more sense for vampires to be dark beings.  They live forever and probably within the first 100 years have had a taste of every decadence and pleasure available, only to take the next 100 years and explore what not only can be stretched, but also can be improved.  Such is the case with Christian, our not so virtuous hero.  He found Juliette at a rather young age and remained fascinated with her throughout her growth into womanhood. Six years is a drop in the bucket to a vampire but the patience is quite another thing altogether.  It was a six year torture for the man himself of waiting for the right time to strike.  For even though he knew he would eventually destroy her, the temptation she presented pushes aside all residual human emotions with the exception of possessiveness.  But could he save her?  Or would she become just another on his list and in his locked room?

As much as Christian tries to put distance between the two of them, he can't help the emotions rising up inside of him.  He knew it was pointless to fight his nature, so he had to plan around it.  Could he give her up in order to save her life?

Juliette has known Christian wasn't finished with her since the first day she met him.  She knew somewhere in the back of her mind that he would be back, she was just never sure when.  It was almost a relief when he finally claimed her.  She just never fully fathomed what being in his world really entailed.   The dark parts of her soul rejoiced at finally being with him, because only he held the keys to her most intimate fantasies.  And those fantasies, were wrapped up in leather and chains.

This was, in my mind, a more accurate portrayal of these beings if they did roam the earth.  The most deadly of predators with a taste for fear and pain.  Playing with their food before the sampled and indulging in all forms of decadence.  The question will always remain on how much of their humanity the would retain.  I think the answer lies in the being itself!  Great read!!

Don't forget to subscribe to Kitty's newsletter by
sending an email to kittythomas29@gmail.com with the word
subscribe in the subject line, Kitty runs amazing contests for her
followers!