Review: Play Me by Jennifer Probst 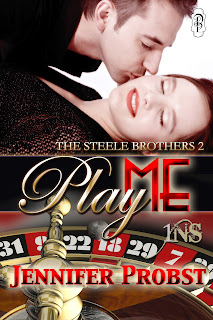 Professional gambler Sloane Keller is tired of dating weak willed men and longs to meet a man who challenges her dominant personality and forces her to submit. As the Queen of Cards, she’s used to making her own rules, and craves the excitement of Vegas. But her inner heart cries out for someone who can be her match, both inside the casino and in the bedroom.


As the new dealer in town, Roman Steele is burnt out on women looking for a quick penny and a man to follow. He craves a woman with fire in her soul and a keen intellect who can challenge him. When his brother recruits Madame Eve to help, Rome is amazed at the complicated woman he gets to spend the night with. But when the evening is over, will she be gutsy enough to offer him forever?

So I was on my way to either becoming a serious Jennifer Probst fan or just entranced with the one night stand series, because I have read several of these books.  Even though I have enjoyed the series I have decided to jump on board the big fan of Jennifer Probst train.  What can I say?  I'm a HUGE fan of BDSM, whether light (in this one its light) or just all out.  It just adds that extra bit of naughtiness to the scene and I love it!  But this book brought a whole other level to the playing field.  In most books I have read the woman has secretly wanted to be dominated, but to Sloane, its a total surprise!!  She just thought that something was wrong with her and she was hard to bring to an orgasm, unless of course it was by her own hand :)  Men were intimidated or jealous of her so she just kind of brushes of entanglements.  But she missed sex (with a partner) and Madame Eve seemed like a great way to get some hot sex with no mess.  And then she gets a glimpse of Roman and all that changes..

Roman was tired.  He just wanted a cold drink and a good nights sleep.  The last thing he was up for was a blind date set up through his brother via a dating service. But he was happily married and he really wanted to spread it around the joy.  Roman receives Eve's text letting him know where his date awaited.  As he makes the journey to the card table that she is located at, a dawning comes upon him.
Sloane Keller is the Queen of Cards and he was half in love with her already!!!  He had watched her on the circuit and had even been present at a few of her games.  Oh this woman was just what the doctor ordered!!!

Roman and Sloane go through a battle of wills because both are dominate.  It was easy to picture the sparks flying all over the place with these two battling out the supremacy issues.  I really enjoyed this short hot number and can't wait for the next Steele to pop up!!  For those of you that missed my review of the first book, Catch Me, you can check it out here: http://closeencounterswiththenightkind.blogspot.com/2012/03/catch-me-guest-post-and-review-with.html  This is a smoking hot series!!!

Cannot thank you enough for the wonderful, thorough review!

For me it depends. I like a strong female, but not so strong that she irritates you when your reading.

Great review! Another book that I need to add to my wishlist.

Wow! Sounds great! This review as sold me! :D Definitely getting!

Great review! I will definitely be checking this one out soon.