Review: An Improper Wife by KyAnn Waters and Tarah Scott

So you have met these two unbelievable authors and looked over their collaboration.  So what did I think? 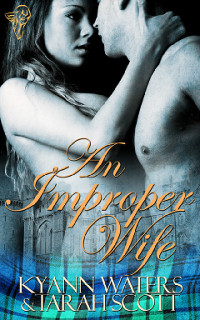 A proper young lady should never attend a Masque...Aphrodite is no lady.

Taran Robertson, Viscount of Blackhall, makes no secret that he despises his obligation to marry the Sassenach heiress chosen for him by his father. As a last foray before his wedding, he attends a masque. However, the spirited vixen he meets and seduces has secrets...secrets that just may reveal he’s to have an improper wife.

I loved Caroline!  She was by far my favorite character.  She sets off to get one night of passion, to discover a stir of feeling, a hint of decadence, a memory to chase away the cold that will surely surround her marriage.  So she dons the costume of none other than Aphrodite herself, and sets off in search of pleasure.  Sadly, she discovers she is more nervous than naughty and her blue domino companion just isn't sparking anything but boredom.  The last straw comes when she spies a friend and decides then and there to call it a night.  She sends her companion for some wine and sneaks off to the back to escape him and her friend.  She unsuccessful regarding the second and receives a brief scolding. Mentally preparing herself for disappointment, she trudges off to the gardens to make her way home.  It is there that she runs into the man that ignites far more than she is prepared to deal with.

Taran is upset by the fact that he is being forced into marriage.  He always assumed that he would be able to marry for love, since that emotion was lost on his father and older brother.  A close friend talks him into coming to this masque for a night of enjoyment before the wedding.  He reluctantly agrees and arrives just in enough time to keep a certain goddess from leaving.  For if he has his way, she will be staying with him for more than just a few hours!

This is an intriguing tale that has you laughing and hanging on the edge of your seat.  I thought it was an amazing collaboration, and look forward to  reading something from these ladies in the future!!  You will not be disappointed in the wild and proper Lady who wins her rugged Scottish Lard.  It is indeed a book worth reading more than once!

Hi Nikki
thank you so much for the guest host and the amazing review. We appreciate your time and enjoyed our visit here.

Glad you liked reading the story as much as we liked writing it. We too laughed at so much of Taran's and Caroline's bantering.