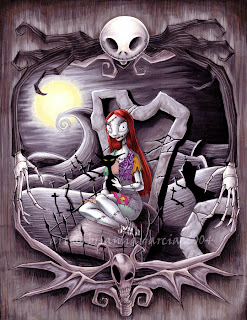 Good evening everyone!  This evening I was lucky enough to catch an interview and guest post with Leslie, where she will be talking about her newest naughty Benefits of Sharing.  In this book three is definitely not a crowd!  LOL!  So without further ado take it away Leslie with her Spooktacular Spotlight!


Never Peek Through Keyholes
In celebration of the month of October and Halloween goodness, I wanted to share a story. My daughter was recently in the Halloween spirit and had an itch to read some scary stories. So I went online and found a site that posts scary stories for kids. I continued to prepare dinner while she sat at the desk and read the scary story Keyhole aloud. Let me tell you, when she got to the last sentence of this spooky story, we both gasped in fright. Although my daughter's desire to be frightened by a scary story was fulfilled, her desire suddenly ended when the story did. Want to know what made us gasp? The creepy story and the link to the original post are below.
Our reactions to the story brought back so many feelings that I had as a little girl when I read my first scary story books. The chills that trickled down my spine as I sat glued to the pages, twist after twist holding me hostage. It was absolutely great! I love being frightened, even now. I'm anxiously waiting to participate in the fun and thrills that occur on Halloween night with my family, especially with my daughter.
Keyhole by Unknown Author
(Originally posted here on Scary for Kids: http://www.scaryforkids.com/keyhole/ )
A man went to a hotel and walked up to the front desk to check in. The woman at the desk gave him his key and told him that on the way to his room, there was a door with no number that was locked and no one was allowed in there. Especially no one should look inside the room, under any circumstances. So he followed the instructions of the woman at the front desk, going straight to his room, and going to bed.
The next night his curiosity would not leave him alone about the room with no number on the door. He walked down the hall to the door and tried the handle. Sure enough it was locked. He bent down and looked through the wide keyhole. Cold air passed through it, chilling his eye. What he saw was a hotel bedroom, like his, and in the corner was a woman whose skin was completely white. She was leaning her head against the wall, facing away from the door. He stared in confusion for a while. He almost knocked on the door, out of curiosity, but decided not to.
He crept away from the door and walked back to his room. The next day, he returned to the door and looked through the keyhole. This time, all he saw was red. He couldn’t make anything out besides a distinct red color. Perhaps the inhabitants of the room knew he was spying the night before, and had blocked the keyhole with something red.
At this point he decided to consult the woman at the front desk for more information. She sighed and said, “Did you look through the keyhole?” The man told her that he had and she said, “Well, I might as well tell you the story. A long time ago, a man murdered his wife in that room, and her ghost haunts it. But these people were not ordinary. They were white all over, except for their eyes, which were red.”
That was an awesome story!!  Thank you so much for sharing!  Below are some questions that Leslie was kind enough to answer for your reading pleasure! And of course her hot hot hot cover for her latest and greatest! 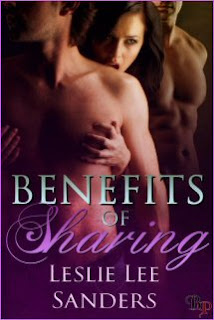 Interview:
How old were you when you first realized you wanted to write?
I was eleven years old, reading scary stories that I wished I could write myself. Then I thought, I should write some scary stories myself.  Scary stories were the first thing I wrote and recently began writing erotic romance in 2005.
Most authors have an unusual story or way that they come up with their ideas for books…Do you have one?
I come up with ideas for stories in the most usual ways; reading headlines, watching people, thinking of new twists on old ideas. The most unusual way I've come up with ideas is probably in my dreams. I have several stories that I've written where the main idea was first played out in a dream. I would even go as far to say the mysterious character in my recent release, Benefits of Sharing, was a character of one of my dreams literally and figuratively. J
What was your biggest influence that steered you towards writing?
What steered me was the urge to create. I needed to create my own worlds, characters, and predicaments. And once perfected, I had to share my creation with others.
I have to ask, are sex scenes hard for you to write?
Yes and no. When sex ties in to the story perfectly, the emotions are there and the outcome moves the story forward, it's easy. It flows. It's like magic. But when I put sex in the story because I have no way of transitioning to one part of the story to another, it's really difficult to make it happen. That's how I know the scene should be cut and I should revise.
Do you see yourself writing in another genre?
Yes, I do. I enjoy horror, thrillers and short scary stories. I have a scary story book available on Amazon.com under a pseudonym. I wrote it for mature teens. It consists of six scary stories about the supernatural, demons, and murder.
Has your family been supportive?
This question is always difficult to answer. Whenever I get this question I honestly have to think about the answer. The only way I could answer this is by saying; my family encourages me to do what I love to do. That's pretty much where they tie into my writing career. Lol.
Are any of your characters reflective of you?
In my ménage novel and online erotic serial, Three's a Crowd, All of the characters are a different piece of my personality. I little bit of this, a little bit of that. That's probably one of the reasons why I absolutely love my Three's a Crowd characters.
What do you like to do when you're not writing?
Read, Relax, watch movies, play Xbox 360 with my hubby, record music, make funny home movies with my three girls, get some fresh air, swim, or even take a hot, relaxing bath. I'm a bit of a homebody and the best entertainment for me is also familiar and relaxing.
Who is your favorite book heroine?
No favorite in particular, but I can tell you the kind of heroine I like. A Smart, sophisticated and creative woman who's progressive and makes things happen, but still adores a man (or two) who can show her new and exciting ways to love.
Do you have any unusual habits that revolve around writing?
Nothing unusual, but I like to listen to music as I write. If it's too quiet I can't think. Lol. I like to put on music that resembles the mood of what I'm writing. That way I can write for hours effortlessly.
What is your favorite mystical creature?
Unicorns! I wanted one since childhood.
What were some of your biggest challenges at the beginning of your career?
Finding  readers. At first I had no idea how to let people know my books exist. The more I learned, the easier it got.
How do you feel about reader comments?
I value reader comments and I appreciate the reader who takes the time to comment on my work. I appreciate the reader who not only rates my books but leaves a comment as to why they gave the book a particular rating. Although a rating and review is merely one's opinion, I think it's good to know what others think of my creation (unless they're rude for the sake of being rude).
Do you have any advice for new authors?
Keep learning. Don't ever think that what you know about the publishing business now is good enough. The business changes so often it's almost hard to keep up. However, if you are serious about your writing career you will learn everything you need to know about this business, apply it and keeping learning.
Where are your books available?
All of my books are available at most online book stores including Amazon.com and Barnes and noble.com.
Backlist Titles & ARe profile: http://www.allromanceebooks.com/storeSearch.html?searchBy=author&qString=Leslie+Lee+Sanders
What can we expect from you in the future?
Currently I am writing a MM, post-apocalyptic erotic romance. Before the Darkness revolves around two survivors of an asteroid impact, Elliot and Adam, who are forced to confront their pasts in order to appreciate their second chance at life and possibly make for a better future. I aim to have the first draft finished before the end of this year.
Where can we reach you and become informed of updates?
My website: www.leslieleesanders.com
Twitter: www.twitter.com/LeslieLSanders
Author Bio
The author of several books of fiction and fiction with spice, Leslie Lee Sanders spends most of her time writing erotic romances mostly in the MM and MMF categories. She currently has two books available for the late teen readers and several erotic romances published as e-books and in print.
Free MMF erotic serial Three’s a Crowd online at: http://www.threesacrowd3.com
Thank you so much Leslie for stopping by and sharing!  I enjoyed having you!

Thanks for having me, Nikki!