Good Morning!!  I am so happy that you have stopped by on this kick-off  hop hosted by my friends at http://fangswandsandfairydust.blogspot.com/p/giveaways-contests.html who have a super spectacular giveaway going on right now!  For this stop I'd like to introduce you to the wonderful author T. Lynn Tolles.  She has written a short Halloween piece in honor of my favorite holiday and has graciously offered up a ebook copy of her latest book Bloodstone Heart.  So T. Lynne...take it away!!

It is once again the time of year when the bountiful harvests of the year have been sown and the earth soil rests and rejuvenates herself once again just in time for Spring. The heat of the summer has finally subsided and clouds descend upon us like a giant meticulously hand-stitched quilt and fast approaching is All Hallows Eve.
Otherwise known as Halloween, we have found childhood memories of trick or treating under the moons light disguised with costumes hoping our friends, family and neighbors can’t guess who we are. But what we often forget is that our ancestors celebrated this holiday in a much more solemn and tentative way, for All Hallows Eve was not originally about sweet candy and laughter but death, spirits and impending harshness.  It was the night when the curtain between the dead and the living was at its thinnest and the dead took advantage of this eve, to once again visit the living and vice-versa.
Like many things in life, spirits range from benevolent to malevolent and everything in between, so in order to confuse and disguise themselves from those spirits that might intend harm upon them, our ancestors carved turnips, gourds and later pumpkins into scary faces to ward off the harmful spirits. Masks, too were worn in case one were to run into a disgruntled spirit on their way home in the darkness that appeared earlier and earlier with each passing day of this season.
Consider this, you live in the 1600’s, you’ve just spent a month or two on a horrendous journey from across the Atlantic Ocean to live in a new untouched, unknown land. You settled near the coast and life was incredibly hard – heat and humidity in the summer like you’ve never known, and rain and snow in the winter that felt as if it would never end. Anything west of where you lived was wilderness, in which your priest/pastor informed you, were home to the devil and his demons who roamed freely in those woods nightly and seduced those who dared to enter into becoming witches. You rarely lived past your thirties and anything that couldn’t be explained away was the devil’s doing. It’s a wonder we ever survived.
So remember your ancestors this All Hallows Eve when they come a calling and celebrate what they endured so that we could live the lives we live now, with a candle in a hand-carved pumpkin. Enjoy your Halloween. May your Tricks be sweet and your treats even sweeter.
T. Lynne Tolles
Thank you for that T. Lynn!  So now I'm sure your wondering about the details of the book to be given away!  Well wonder no longer!  Here is a brief description and my review! 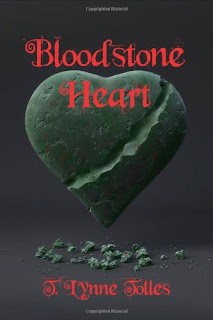 Josh Brenner is a good looking guy with an extraordinary talent he thinks is a curse - He's telepathic and he can't find the mute button, so he lives in solitude only coming out at night. But Josh isn't the only supernatural out and about this cold March night, because when Josh returns from his midnight run to the store to avoid people, he runs smack into a hungry agitated vampire looking for something and Josh is in his way.?? Horrified by what he's seen and barely escaping with his life, he confides in a woman he barely knows, but has an instant connection with. When another vampire shows up looking for the first, Josh and his friend Lanie find themselves running for their lives and head to Oljone, California where a friend of Lanie's from college has helped her with a supernatural problem in the past. ?? But when they get to California with the vampire hot on their trail, they find Darby, Lanie's college pal, has moved to Massachusetts in search of her vampire boyfriend Devon. Luckily Darby's sister Rowan and Devon's vampire brother, Blake, step in and help Josh and Lanie as best they can.?? The four work together along with Dean (a werewolf) and his girlfriend Sally (a witch) to figure out this crazy mystery. What does this determined vampire want and why? And is he willing to kill for it? As this mystery unfolds, so do other darker mysteries. Will they figure things out in time before someone is killed? You'll just have to read it to see!

Josh was, at his best, a recluse.  He had the science of avoidance pretty much down to an art.  It wasn’t that he hated people.  It was just his unique ability that kept him from ever being able to stand being around someone for long periods of time.  Imagine being able to hear everyone’s thoughts, random, rude, sexual, that stray thought you can’t believe you processed but glad no one will ever know?  Josh could hear them.  He had, over the years, developed a dependency on his IPOD.  His music, played at loud levels, made sanity possible.  It had the ability to shield him from other people’s bombardments and conversations going on in their heads.  Until a late night shopping trip and a chance encounter with a beautiful woman, pulled the comfortably well worn rug out from underneath his feet.
Lanie hated crowds.   She went out of her way to avoid them which meant shopping at strange hours in the middle of the night.  She had hidden herself away from society because in her mind, she was cursed.   Not the I can’t walk and chew gum kind of curse, more like she destroyed what she touched.  Literally.  That’s why she always wore gloves.  Her attempt at being normal.  The last thing she expected was to be saved (from herself) by a tall beautiful white knight.  He caught her at just the right moment that not only saved her from bruises to her person, but lots of embarrassment as well.  Talk about all the weird ways to meet someone!  It’s too bad she possessed 0 social skills and was incredibly shy.  He looked like the type she would like to get to know!!
Who could have imagined that the one small event could alter both of their life’s so completely?  Josh is completely drawn to her.  So much as that he asks to be able to escort her home.  Lanie is hesitant.  Through the odd conversation of two totally social skillless people, they reach an agreement.  Josh can’t hear her thoughts.  He is in absolute heaven, although a little insecure, considering the fact he has no idea what she thinks of him…which is completely!  This was a delightful glimpse into a great series by author T Lynne Tolles.  Josh and Lanie’s story soon become imersed in the series itself, which has a lot going on during this time.  I have known many people in my life that suffer from being a recluse and she hits it on the head very well in her writing of these two characters.  Lanie is very soft hearted, and it shows during her own little adventure in this book.  Josh is centered on developing and controlling his power and needs to be nudged into analyzing himself and his feelings.  And what he finds out sends him into shock after shock.  LOL!  Men just are never prepared for when the right woman literally falls into his arms! This was an excellent addition to the series.  I can’t wait to read more about Dominic and hopefully find out more about Jules.  I wonder if she perhaps is the key to the Dark Angel?  I suppose we must wait and see!

So all you have to do to be entered into this lovely contest is be a GFC follower and leave a comment with an email address!  Be sure to say Hi to T. Lynn for she will be stopping by to say Hi and answer questions!!  This is a great series! Be sure to check out my other giveaway while your here! Its a wonderful novel called The Bridge of Deaths and the author is offering up an autographed copy!  Click Here. Be sure to check out the rest of the hop stops and thank you for stopping by!!

Thanks for the giveaway. It looks like a really good book.

Following! Fun post about the history of Halloween, and the book sounds great. Love the spooky-themed blog art, too!

Nikki...thanks for hosting this stop in the tour. Love your website art! Very cute with a hint of spooky! Have a great day!

Thanks for this giveaways!!!
Hi to T. Lynne!!

Thanks T. Lynne! I thought C was going to strangle me a few times but it turned out beautiful ;) Thanks for the excellent post and great book!

Book sounds great and the post itself was fun to read!!

Thanks for this giveaway.

Thanks for the giveaway and the book sounds great. Beautiful book cover
kydirtgirl68 AT gmail DOT com

Thanks so much for the giveaway! Hi T. Lynne! : )
GFC: Erin Baker
e(dot)baker219(at)gmail(dot)com

This book really looks very good!! I love the cover also. I have no heard of this author, but I love finding new authors and their books.

I am looking forward to checking out your book, T.Lynne.

I am a GFC follower-judy

Hi T. Lynne! Thanks for the info about the history of Halloween. This book looks like it would be good, an action adventure with lots of various characters. Thanks for the chance to win a copy.
GFC follower: June M.
manning_j2004 at yahoo dot com

Thanks so much for the giveaway! Hi T. Lynne!
gfc as Helen
helldog3 at aol.com

HI!
thanks for the giveaway!
follower
nightsky1102(at)gmail(dot)com

Looks like a awesome book thanks for the giveaway
azstyln602@aol.com

Thanks for the awesome giveaway!!!
GFC follower - Tonya Dean

Thanks for the giveaway! Sounds like you have another winner on your hands, T. Lynne! I love me a vampire story, especially this time of year. I'm a new follower via GFC (MamaHendo3).

Thanks for the chance to enter and
Hi T. Lynn, the teaser was really good.
Much success in the future.