The Matchmaker's Mark By: Regan Black 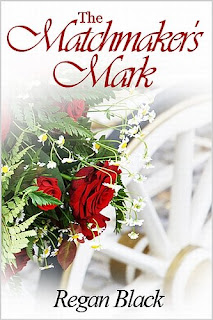 The first of a brand new, lighthearted paranormal romance series set in Charleston, South Carolina. When you’re ‘more’ than human, finding your soulmate isn’t as easy as answering a few questions online. It’s best to track down Campbell Consulting, a.k.a. the Matchmaker. In Charleston, South Carolina half-elf Lily has a birthmark her elders vow is a mystical promise of true love. So far she’s yet to encounter Mr. Right in either the elf or human realms. Dare, a wood elf, has led the Matchmaker’s security team for years. In town on a simple errand, when the Matchmaker disappears his future is turned inside out. And Amy Campbell is a completely human English professor about to discover the true magic of the family business…

Lily had a special way with flowers.  It seemed only natural that she would start her own business as a flower designer.  She knew special charms and small spells that would have her customers leaving with a smile as she fulfilled their needs. She had come to terms with her inability to do magic like the rest of her family.  She was raised on tales that were suited to the special mark on her arm.  The stories included the whispered name of the Matchmaker.  But Lily was done with that.  She had accepted her fate and choose instead to stay in her mothers world and live the life of a human.  She secretly yearned for more, but knew that it was probably out of reach.  Until Dare tries to come into her shop.

Dare was on a mission.  He had to deliver a letter to the reluctant niece of his employer.  She was resisting him, which was an unusual response.  Most people were very agreeable in his presence.   It must have something to do with this town.  He refused to back down on the quest and proceeds to retrace her steps throughout the day.  His wanderings bring him towards the local flower shop, which is conveniently closed, but he spies someone moving around inside.  Eager to continue in his path he knocks on the door in hopes she'll take pity on him.  No such luck.  She turns and points to the closed sign.  He pleads with her to allow him to come and pick out an arrangement for his mother.  Lily shakes her head at the obvious lie but makes her way to the cooler to pull out a sunflower arrangement.  She brings it to the door, still not allowing him in, and charges him twenty dollars.  But as their hands accidentally brush, they both forget everything.

This book has bits and pieces of the Matchmaker's history, but she really is more like a side story. This book has an array of creatures that jump in and out of it.  The mixture makes it quite delightful.  You have a girl transitioning into becoming the Matchmaker, while the love story is being played out between Dare and Lily.  Its completely hilarious the situations Amy brings about because she doesn't quite grasp the concept of her power or how to control it.  She literally becomes a walking embodiment of cupid which draw all kinds of people to her.  Dare was a bodyguard to the old Matchmaker, who happened to be Amy's aunt.  He tries his best to direct her and teach her about protocol but Amy resists.  She refuses to give up her freedom.  That's when things really get started.  This book was really entertaining, with all sorts of magic, humor, and twists weaved into the plot. Even the pets had an important role to play.  Lily was my favorite character.  She was very easy to relate to.  She never felt good enough and was always trying to over compensate for the things she felt like she lacked.  She had a good heart and it was really brought out in her work!  In truth all the characters were very well written and completely enjoyable.  Even her overbearing brother.  It is a sweet light paranormal romance that will have you starry-eyed with its sweetness!

Great review..i will be picking this one up

I like the sound of this book. Thanks for the review. I will keep my eye out for this.

Thanks for the review. This book sounds great!

I have seen some of Reagan's books and follow her newsletter. I need to get this one. Thanks for the review!
Mel
bournmelissa at hotmail dot com

I love books set where I live. Can't wait to read more about these characters!

I just added this to my list... must go get to read soon!! This looks so fun!
lavendersbluegreen(at)yahoo(dot)com

I love humor in any book. Looking forward to this one.

Added this one to my summer read list.
Yvette
yratpatrol@aol.com

This sounds cute, seems like a good summer read!

I would love to read this book. I enjoy books that have humor, romance and it's also my favorite book genre: paranormal romance. I am adding it to my book wish list.