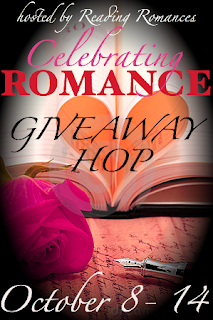 Hello and welcome to CEWTNK!!  I'm so happy that you have made it here! A big thank you to Nat @ Reading Romance for the hop!! Before we jump into the extremely hot giveaway for this hop, I'd like to mention that I have two other giveaways going on as well! The first is an extraordinary paranormal read called The Bridge of Deaths, which is an autographed hardback copy (open to US and Canada only) and the other is for the Hop for Red October which is an e-book copy of Bloodstone Heart (vampire series and its international) Just click on the titles below and follow the directions to enter! If for any reason you have trouble commenting, email me your info and I will post it! viajeradelmar@aol.com

And now for our special guest Kiki Howell.  Kiki has written up a little Halloween post to share with all my readers and has graciously offered up a choice of one of her titles!! So stay tuned for all the information on how to enter in this great giveaway!  Take it away Kiki!!! 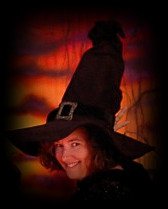 As you can read, Kiki is packed full of talent! She has offered up to one lucky commenter a choice of one of her releases!  Here are just a few samples!! 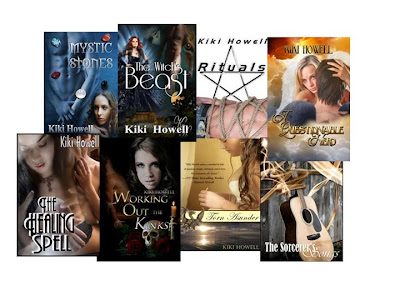 These aren't all of them, this is just a tease! LOL!  So how do you enter to win this great prize? Simple!  Make sure you are a GFC follower and leave a comment with your email address!
+1 if you like Kiki's face book page!  http://www.facebook.com/pages/What-Are-You-Afraid-Of/155231937903164
Thank you for stopping by and good luck in this giveaway and the rest of them below!!!

Hi Kiki,
Awesome excerpt. Love Halloween and all it's traditions. Really don''t like Horror movies anymore but I'm a sucker for the reads. Thanks for the opportunity. I look forward to reading one of your stories. :) GFC name is Lucky47.
Carol L
Lucky4750 (at) aol (dot) com

Thanks Carol! I don't get a lot of time to watch the movies anymore, as with my family I have to go off and watch them alone :( But, have to say I was thrilled with FX's new American Horror Story series this week, and it starts after the boys are in bed :) LOL

Thank you so much for the chance to win♥
GFC: Jeanne
Rathouska(dot)jana(at)gmail(dot)com

I love Halloween, it is my favorite holiday and time of year. Thanks for the giveaway
helldog3 at aol.com

Had to run out and came home to all of these nice comments! Thank you and good luck :)

I love everything about Halloween except for haunted houses! I scream like a little girl whenever I try to go through one!
GFC: Julie Witt
FB follower: Julie Witt

I can't do the haunted houses either, Julie! Hate the strange things coming out of the dark and touching me!!!! Thanks for entering :)

GFC Follower - Anastasia
Liked What Are You Afraid Of? on Facebook - Chi Shannon
Thanks for the giveaway :)

Happy Halloween! Love this time of year.
+1 Liked What Are You Afraid Of? on Facebook-Tina Brown Wheaatley

Thanks for the great giveaway! GFC - aprilharvell
Liked What Are You Afraid Of? on FB - April Harvell
april@pinebelt.net

I'm always looking for new authors and one of the best ways is through blog hop giveaways. Looks like I've found another new one! Thanks for the giveaway and for participating in this blog hop! I'm a new follower via GFC (MamaHendo3).

I have some of Kiki's books. I do love scary movies, but I hardly ever watch any these days, only watch a little tv (maybe 1 hr a day avg)
GFC follower: June M.
Liked Kiki's FB page: June Manning (Cute dogs)
manning_j2004 at yahoo dot com

Thanks for introducing another great author through the blog hop! I LOVE scary movies. My two teenage daughters and I cuddle on the couch and watch one at least once a month!

Thanks so much for the giveaway. I'm already a GFC follower, and I "liked" Kiki's FB page.

I love scary stories. Thanks for letting me know about Kiki and thank you for the giveaway!

Thanks for the giveaway. :)

GFC Krystal Larson edysicecreamlover18@gmailDOTcom I really liked the excerpt, thank you very much for the chance to win!

the excerpt was really nice :)

Thanks for the chance to win

i am a new follower , found you on the hop AWESOME
staceyx at telus dot net

Thanks for the giveaway. I love Halloween it's so much fun seeing how the kids dress up and I love to see everyone's decorations.
GFC follower - Sherry S.
like Kiki on Facebook - Sherry Strode

Thanks for the giveaway! Follower! liked Kiki on FB as Alisia Machado
nightsky1102(at)gmail(dot)com

GFC follower
Thanks for the great giveaway!!