So this is something new we are trying out here at CEWTNK.  And you all know I love new :)  I have to keep you coming back and wanting more...MUAHHAHAHAHA.  So a bunch of blogs are lumped together advertising this new book and offering up a giveaway.  The book sounds great and the concept is wonderful...If you really dig the book than you have a bunch of chances to win it. So check out the Blurb and excerpt and I will leave info at the bottom on your very own chance at winning!! 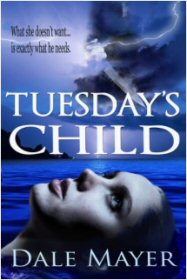 Dale is an awesome writer! i read and reviewed Tuesday's Child and i highly recommend it! c",)

Thanks so much for hosting me and Tuesday's Child! And of course, mucho thanks to aobibliophile for the lovely comment on my book!

Hi Darcus - good luck on the giveaway. Thanks for stopping by.

Hi Marybelle, thanks for commenting! Glad you like the sound of the book! Good luck on the draw!

Thanks for the giveaway!
thriftshopgrrl@hotmail.com

Love the sound of this one !!! Will be def adding this to my list and Popping over and find Dale !! Thanks for the giveaway !! and once again love the covers !! Dale has great cover love !!

Thanks for the teaser !!