The Merzetti Effect By: Norah Wilson 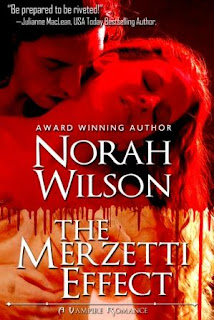 Delano Bowen has been a medical doctor for a very long time. More than 170 years, in fact. For much of that time, he’s been searching for a way to reverse the curse foisted on him by a vampress who sought to own him. With the emergence of medical technology, he now also aims to develop a vaccine to protect the vulnerable from predation by rogue vampires. After a century of searching, he thinks he's found the key to his vaccine – a surviving descendent of the Merzetti family. The Merzettis were virtually hunted to extinction over the years by rogue vampires who feared the anti-vampirism properties in their blood.

A foundling, nurse Ainsley Crawford has no idea that she carries a genetic gift, and Delano aims to keep it that way. He must keep her close, and ignorant, for he can leave nothing to chance. He manipulates events to ensure her unwitting cooperation. But when Delano's arch enemy Radak Janecek mounts an all-out assault to destroy Delano and the fruits of his research, Delano is forced to draw Ainsley even closer to protect her. Inevitably, the attraction that has sparked between them from the first flares hot and urgent. Ainsley sees no reason why that attraction shouldn't be consummated, but Delano knows succumbing to it is not just ill-advised; it could literally be the death of him.
My Review
Ainsley was desperate.  She had just quietly been fired from her job and needed employment fast.  So when a questionable doctor in need of a research assistant asks her for a nighttime interview, she pushes her lingering doubts out of the way and shows up.  She did a background check on Dr. Bowen and it came back clean.  So what if he liked to work weird hours?  It didn’t really matter as long as a steady paycheck was coming in and she didn’t have to do anything illegal.  Unfortunately being attacked on her way to the interview wasn’t in the broad scope of things.  And neither was her hot savior.
was almost a little too late on his rescue.  He cursed himself as he fought of the rogue vampire and scooped up Ainsley in his arms.  She needed a transfusion, now; her body was going into shock.  Lucky for her his on site facility was well equipped with everything she was going to need. He needed her too badly to lose her now.  She was the one he had been searching for. She was the key to all of his research.  He just didn’t count on his attraction to her, or for that attraction to become all consuming.
Both of our characters have a lot of secrets that aren’t apparent in the beginning of the book.  manipulates her through the first few chapters without her realizing it but our Ainsley is one smart and resilient cookie.  She bounces back pretty quickly from all the shock she encounters and surprises nonstop.  She definitely keeps him on his toes.  I enjoyed the amount of descriptive details she went into when going over his research.  It had a realistic feel to it.  is very self-sacrificing and logical in his pursuit to help others like him.  He has singlehandedly built his own empire throughout the years trying to find a cure for vampirism.  After the death of his wife, he remained solely focused on his goal.  He was my favorite character even though the rest of the cast was really great too.  He had a lone wolf kind of vibe that was totally sexy.  There are a few twists that surprised me in the book, but it helped shaped the story.  I thought it was an excellent read and highly recommend it!  I can’t wait to read Aiden’s story even though I thought Eli deserved a little bit of happiness next J!  I give it 4 spiders with a Level 3 Heat rating!!

Hi Nikki, I really loved your review. So precise and clear that I now need to read this book. Thanks for this post and review. I'd never heard of this title or Author and I'm glad I stopped in today. :)
Carol L
Lucky4750 (at) aol (dot) com