Return to the Sea By: Rebecca Royce 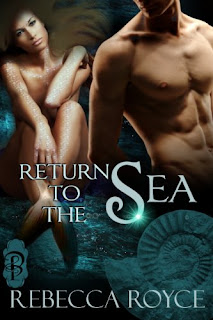 The clock is ticking for Laneigh. Banished from the ocean ten years earlier, Laneigh is shocked to discover all the Mer people living on dry land die within a decade of leaving the sea. With her life ending, she boards a cruise ship, intent on challenging the Mer who destroyed her life. She doesn't expect him to save her—but she has a request she is desperate he honor.

Hearing Laneigh’s name on the wind, Sylarus, son of the Mer king, is powerless to stop himself from seeing her. Defying his father’s edict, he rushes to meet the woman he’s desired his whole life. But when he learns of her impending death, something shifts deep inside Sylarus. He cannot—will not—let her die.

Sylarus and Laneigh face tremendous odds to be together. In the end, they will either change Mer society forever or perish in the attempt. Can true love forgive after a decade of betrayals?
My Review


Laneigh was running out of time.  Judging by the continuous onset of pain, and what she had seen happen to her Queen, she knew she had very little time left.  She needed to get on the ocean, without actually touching it, and try to contact Sylarus.  Sylarus, the very Mer who had betrayed her, yet had given her the most precious gift in her life. The Mer who at one time, had been solely responsible for the steady beating of her heart. Would he come?  She hadn’t seen him since her banishment nearly ten years ago, even though he was never far from her thoughts.
Sylarus couldn’t believe his ears when the wind brought word of her nearness.  He had to go to her.  Even though she wasn’t in the water, she was as close as she could possibly be without actually defying the banishment.  She was within his grasp and nothing could stop him from finding her.
Laneigh and Sylarus are shocked as the years melt away once they are face to face.  The sadness of their separation is nothing compared to the desire that engulfs them both.  But can they overcome all the obstacles of her banishment?  Did the King truly know what he was doing?  Were the Mers being led astray?
The first few chapters I had to literally fight back the tears.  The author did a superb job in expressing the emotional turmoil throughout the entire story.  There are a lot of ups and downs.  The images were vivid and Laneigh was a completely believable and lovable character.  She fought for what she believed in and put the lives of others before her own.  She took a lot of gambles throughout this story but they end up paying off big time in the end.  I loved this book!  I am still amazed at the amount of emotion that was pulled out of me during that short story.  I’m still tearing up right now writing this. I really hope the author continues with the series.  I will be looking out for more of her works.  She has captured a new fan! I give this book 5 spiders with a level 3 heat rating!