Firaseking the Holidays and Giveaway of The Last Awakening by Rachel Firasek! 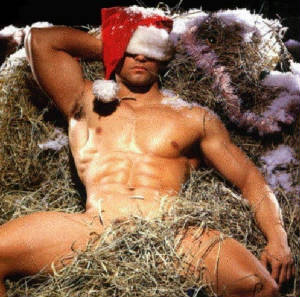 As many of you know I belong to a great review group known as the Sea Sirens who is headed up by a super sweet and talented author by the name of Rachel Firasek!  She has kindly offered up her top five, if you happen to find this guy (please please me!!) under the mistletoe!  LOL!  She has also graciously offered up her newest book to one lucky commenter!  So take it away Rach!!

Okay, let's have some fun!
In the spirit of Christmas and my fave tradition--kissing under the mistletoe--I thought we'd talk about getting ready for that moment, and my precautions...er preparations for a perfect smooch.
1. Always...Always, brush teeth after stuffing your face with the rows of heaping carbs that you'll have to walk off later.

2. Be sure that underarms are b.o. free and if you're traveling, it wouldn't hurt to spritz the air freshener and walk through the mist--just to give you that fresh scent he'll love.

3. Do a tongue check against now clean teeth to make sure no little pieces of turkey are stuck in between the molars you'd like him to lick later.

4. Remove any excess lipstick that might be a deter for him. Guys are tricky and will use any excuse in the book to avoid kissing a woman they've spent the last decade or two with--if you're still in the passionate days, you can skip this part. He'll mostly dry hump you in the living room in front of your folks if the relationship is early enough.

5. Don't forget the girls. Pull them puppies up and plump them until they look like two pillows he'd like to lay his head on. When he goes in for the inspection, lock on baby! *Muuuuwaaaa*

So, this is my fail proof plan to get my guy to lock down on my love lickers. Do you have one to add? I'd love to know. *smooches*
Just be a GFC follower and answer Rachel's question in a comment to be entered in to win an e-copy of her latest book!!  Let's take a peek at it!!

I have never kissed under a mistletoe so I don't have much to add to your list. Other than carry breath mints if brushing your teeth is not an option.

hahaha, exactly. Minty breath is a must.

LOL I love this post! And love lickers? HA HA I swear I've never heard that before, but I am sooo stealing it. I already own The Last Awakening, so not here to enter the contest, just showing soem Rachel Firasek love. :-)

Humm make sure to have the lights dim lol and yes have breath mints or gum before hand. :) Thank you for the giveaway. I am a follower under amymccarty1985
amymccarty@hotmail.com

Haha, I loved this post! I am following your check list this year! Great advice. Looking up book one now. To have read, this sunds like a great series!

I did kiss under the mistletoe but this year looks like I'll be alone!

I'm usually kissed under the mistletoe after drinks (usually many more than 1) so I would say "have alcohol handy", so if you grab that really good looking guy you don't really know that well, you'll have an excuse for mauling him under the mistletoe!! Awesome post, Rachel:)
jwitt33 at live dot com

Hilarious list - but oh so true LOL! Here's something to add to the list:
Very Important!! No smoking!! Kissing someone who smokes is nasty - tastes like what I imagine licking an ashtray full of ashes. Now it can be overlooked for a while if the kisser has a hot body and a steamy eyes in a gorgeous face but it gets old real quick.
The book sounds good. Thanks for the opportunity to win.
Am a follower
WildAboutBones at gmail dot com

Gotta fluff your hair a bit so he gets a nice view of your neck! Always been a deal-sealer for me! My guy loves going in for the kill when I do that <3

Happy Holidays & thanks for the giveaway!

Other than breath mints, I think you pretty well covered it! Loved the post! brendem7@comcast.net

I don't have any to add. Your list is what I'll be following this year. Hopefully I'll need to follow it. GFC follower- Joanne B

I need to start following your list.I now see the error of my ways.

Lick your lips while looking at his...then look him in the eye before leaning in...he'll know what you want and be more than eager to give it to you!