Giveaway and Review of The Destiny of Shaitan by Laxmi Hariharan 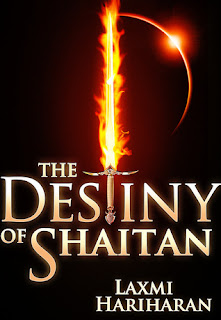 Background: The Destiny of Shaitan, the first novel in The Chronicle of The Three series is a coming of age story, about a girl who falls in love only to realise that to be truly happy, she has to first find herself. Set in 3000 AD, when the galaxy is populated by humans as well as a half human, half alien race called half lives, this novel, tracks the protagonists from five to seventeen years old.
Synopsis: When Tiina accompanies her ex-boyfriend Yudi on a mission to save the universe from the ruthless Shaitan, she seeks more than the end of the tyrant; she seeks herself. Driven by greed and fear for his own survival, Shaitan bulldozes his way through the galaxy, destroying everything in his path. Tiina wants Yudi to eliminate Shaitan, thus fulfilling the prophecy of the powerful autocrat being killed by his son, but she finds that Yudi is hesitant to do so. The final showdown between Yudi and Shaitan has unexpected consequences, for Shaitan will do anything in his power to win the fight—including getting rid of Tiina. The stakes are high and the combatants determined. Will Shaitan's ultimate destiny be fulfilled?
Return to 7 Islands, (Chronicle of The Three, #2): The Destiny of Shaitan, ends with Tiina, leaving everything she knows—including Yudi and the world she helped save from Shaitan—in search of herself. The second novel in the series, titled Return to 7 Islands, follows Tiina as she lands in a futuristic Bombay—now reduced by a tsunami to its original seven islands—and helps Rai, in defending his childhood orphanage from the clutches of Sharmila, Shaitan's daughter. As she struggles to come to terms with her origins in an attempt to understand herself better, she discovers a surprise about her past.

This was one definitely different wild ride.  This book definitely spans a few different genres (YA, Sci-Fi, Dyostpian,fantasy, and Indian mythology) and puts them all together beautifully.  Post apocalyptic India huh?  Yeah, it was amazing.  The author takes bits and pieces from several different myths and weaves them together quite elegantly, for a really great read.  I was sucked into this story with the humor, references to pop culture, joining together the old and the new, and fantastic array of characters to include a lion man.  I really enjoyed this read and look forward to reading more from this author.  The vivid descriptions brought the whole book to life.

I love the idea of books that span genres. Sometimes it's hard to figure out where a book may belong. It also lets you read a book in a genre you may never have experienced before. Can't wait to read.

Love this, =) can´t wait for my chance to read,
Thanks for the giveaway & Happy Monday!
//Linda

This sounds awesome! It's on my TBR list now

after reading about this book it is on my TBR list. Thanks for the giveaway. Gale pgan427@yahoo.com