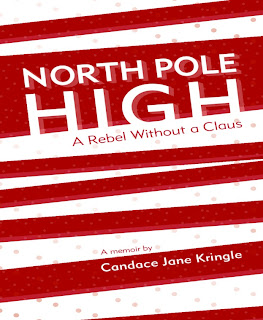 BOYS! And the new boy, Rudy Tutti, is hot chocolate. But he hates anything to do with Christmas!

When Candy and Rudy are forced to work together on a school Christmas-tree project, her world is turned upside down: Her grades start to suffer, she loses her taste for ice cream, and now the two North-Star-cross'd teens must contend with her overprotective father — Santa Claus — before Christmas is ruined for EVERYONE!
Buy Links
Amazon
united states
kindle: http://www.amazon.com/dp/B009I3ZEEM/
paperback: http://www.amazon.com/dp/0615681913/

Spain
kindle: http://www.amazon.es/dp/B009I3ZEEM/
paperback: http://www.amazon.es/dp/0615681913/
Barnes and Noble
http://www.barnesandnoble.com/s/Candace-Jane-Kringle?keyword=Candace+Jane+Kringle&store=allproducts
About The Author
Candace Jane Kringle is a junior at North Pole High. She likes candy canes, unicorn races, and making snow angels. Her father is the most well-known and beloved toymaker and toy distributor in the world. Her memoir, North Pole High: A Rebel Without a Claus , is her first book. After high school, she plans to enroll at North Pole University and write more books, maybe even some fiction. :)


NORTH POLE HIGH: A REBEL WITHOUT A CLAUS


a memoir by Candace Jane Kringle
EXCERPT #1 (of 3)


The reins out of reach, tangled around the yoke, we’d lost control over the crazed deer. I had no choice. I climbed up on the seat, clenching my fingers around the curve of the dash with one hand, grasping for the reins with the other.


“I don’t think that’s a good idea!” Rudy shouted, trying to pull me back into the cab.


We started to switch places. The sleigh made a sharp turn, flinging me over the side. At fifty feet up, I’d have been snow soup in a matter of seconds, but Rudy’s strong grip caught my wrist in the nick of time. I dangled like that, legs flailing in the wind, as we flew wide circles over the North Pole Drive-In.


He finally managed to wrestle me back into the sleigh. Then we felt a bump, heard a clink. The runners had clipped a chunk of ice off the movie screen. Rugged cubes bounced down the side of the glacier, crashing at its base like glass. If Rudy hadn’t pulled me in when he did, those shattered ice fragments would be mixed with sprinkles of crushed Candycane bits.


I buckled myself in and hugged his legs as he climbed up the dash to retrieve our only brakes. The sleigh circled back toward the face of the glacier. The looming ice block sped at us head-on. The deer climbed. They would easily clear it, but not by enough for the heavy runaway chariot they dragged behind them.


About to be smashed to ribbons, Rudy untwisted the reins. He yanked hard aport on my command. A little too hard. The girls steered us away from certain doom, but we whiplashed wide out to starboard.


Sideswiped for a second time, the berg took it out on the sleigh’s fragile runners, crippling them beyond repair. Great. Now even if we were lucky enough to survive, Daddy would kill me.


I helped Rudy slide back onto the bench, reins now securely in his possession. Then came a loud, sickening rumble. Large cracks snaked rapidly across the wall of ice. A giant, furry-knuckled fist punched through, followed by a furious roar. Our minor collisions had awoken the beast that slumbered undisturbed inside the glacier for decades. Now, old Yeti plowed his way out of his cavern. And he was pissed.

This was an absolutely cute and funny read!!  Its a classic tale of girl meets  boy and everything starts going wrong as they not only sort through their feelings, but why Rudy hates Christmas so much.  I enjoyed not only the concept of the book, but the characters, and the creation of Candycane's world, with a chance to take a look at another side of Jolly old Saint Nick.  This is truly a book that will leave you with a warm fuzzy feeling, as you re-live a lot of Christmas memories while enjoying this little Christmas adventure.  The author has a very promising future ahead of her and I look forward to reading more!  This was an excellent read to put you in the mood for the up-coming season!!

Hi Nikki! Thanks so much for hosting this tour stop. I had fun. And thanks for the review. Normally spiders scare me, but I'm thrilled with these five. :D