Giveaway and Review of Realm of Secrets by MaryLynn Bast 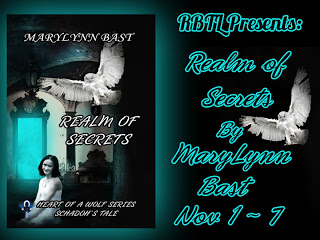 Hello and Welcome to my stop on MaryLynn's tour of Realm of Secrets, which by the way was a great addition to the Heart of a Wolf series!  I can't wait to tell you all about it!!  But first, let's take a look at the book details! 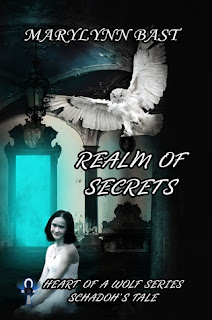 Schadoh Aphenithea has always looked up to her older sister and willingly follows in her footsteps, venturing out into the new realm where humans and other strange creatures exist.
Unexpectedly, Schadoh meets Dakota who turns out to be her best friend and protector. With the threat of vampires invading Loxy and Earth, she will need all the help she can get when the portal to her realm is closed. She is forced to remain in the earth realm and live as a human. Something she finds is not quite as easy as it looks from the wall of mists. Schadoh must learn to co-exist in the earth realm while keeping the secret that other realms exist.

Seriana was one of my favorite characters in this series, so I knew I was going to enjoy this book.  Schadoh is Seriana's sister and bringing her into this story allowed for a more in depth look into Seriana and Schadoh's world.  This book was aptly named for a bunch of secrets swirl around inside and only a few are revealed.....in this book!!  Schadoh is a great portrayal of a young, bored, and very impatient little girl who is dying to get into some mischief.  Unable to escape her guardian and protector Darius, Schadoh concocts a plan to follow her sister into the earth realm.  Schadoh was adeptly named for she retained the ability to blend into her surroundings.  This just happens to be one of the many powers Schadoh discovers she has!!  You follow her along an enchanting tale filled with adventure and a lot of secrets.  She was a very realistic and lovable character.  I enjoyed her book immensely!! 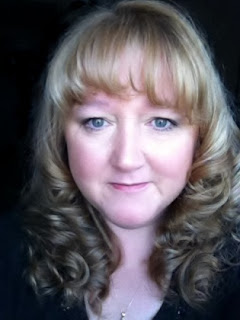 ABOUT THE AUTHOR:
MaryLynn Bast moved to Las Vegas in 2010 from Texas, where she grew up. She works as a consultant with a contractor for the US Military, traveling from base to base across the US and around the world. Whenever possible, MaryLynn enjoys spending time with her husband, children and friends. In her free time she writes paranormal fantasies, loves to read and travel.
So....would you like to win a copy?  Of course you would!!!  Just fill out the rafflecopter!!  Good Luck!!
a Rafflecopter giveaway

A Passion For Reading said...

Nikki thank you so much for the awesome review and your participation in the tour.