Hello everyone!!  It is the night before Halloween and I have a special guest joining me today at CEWTNK!  Michelle Franklin is here tonight and is giving away a copy of her latest and greatest! Stay tuned after her excellent post to find out how to score your copy of her great book!! If you are here for any of the other giveaways please find the button on the side bar that matches the giveaway you were looking for! Feel free to enter all and pull up a chair as you flip through some excellent books and meet some amazing authors!! Speaking of amazing authors here is a short story from Michelle!


A Festive Return
Being in Gallei for the chief of the season meant that the royal party had missed the harvest festivities entirely. The children had enjoyed the apple picking, squash gathering, games and hay rides, but business in the west of the Southern Continent had kept all of the adults from joining their high revel. Their return, however, saw the beginning of Seamhair, the last day of autumn on the Frewyn calendar, celebrated with guising, feasting and merriment in honour of those who had come before and passed on, bringing with it usual accoutrements of sweets and chocolate and all the requisite tooth aches and sore stomach such a dulcet commemoration could merit. The party returned to the Frewyn capital to discover Diras in a glow of festive spirits: decorations of gauze ghosts and green ghouls lined the gables of every home; amber candles were lit in the square in honour of those who had no memorial belonging to them; the bells from the church rang out in subdued tones, calling those who wished to honour parents and children long past with sermon and song; the faint scent of nutmeg from fresh apple pies cooling on open sill and the aroma of mulling spices from steaming cider carts being wheeled round the capital hung languidly in the air; children wearing various costumes of Frewyn’s legends and heroes skipped from door to door and made wide, toothless smiles at old women in exchange for treats, abiding the occasional cheek pinches and spittling lips that the crones of Frewyn were disposed to dispense. It was a prospect of Frewyn’s gaiety that the party triumphed in seeing, so much that when they arrived at the capital gate, they were forced to stop and remark the striking splendor that such a scene could provide. Gallei had shown them its agonies, and here Frewyn would show them its glories.
Alasdair felt his breath grow full. His chest swelled, and he exhaled with a billowing condensation, remarking the festivity in the capital with glistening eyes. His happiness at seeing his people in so revelrous a state was more sentiment than his speech could express. He turned to the commander with the parted lips of impending words, but nothing came beyond a sigh and a thankful nod. He requested that the party should move forward; he was anxious to see his queen and his son and therefore determined that the others were anxious to see their families likewise, but the moment Alasdair was discerned along the main road to the castle, drawing attention by the various soldiers beginning to peel away from the ranks and return to their homes, there was an end to the king’s designs of a quick and peaceful return. Ovation came from the square, entreaties for their king poured in from every quarter, and soon the party was surrounded by the capital’s denizens coming to the king to congratulate and wish him joy. Alasdair must stop; he apologized for the delay, but a few moments more where the greeting and honouring of his people was concerned would be of little consequence to being detained. Bows and curtsies were given, ‘Your Majesties’ addressed him, and hopeful eyes and hands outstretched bearing tribute and gifts for their king were borne. Alasdair was in such a beholden and appreciative humour that he had forbearance for every command of his attention: he said hello to the children skittering about his feet demanding that he judge their costumes, he waved to the young women who were ever desirous of seeing their handsome young monarch, he endured every pat on the cheek that the wives and old women could accord, and he even nodded to the Reverend Mother who emerged from her place in the Church to bless the king’s safe return. Their attention and their exuberance at seeing him and greeting his party in such a manner was all Alasdair’s exultation, and the instant he turned from their society to recommence his arrival to the castle, he wiped a tear from his eye and reclaimed his place at the head of the procession with a bowed head and grateful smile.
Wasn't that a great story?  Take a look at Michelle's Book! 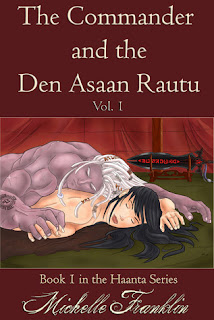 The Kingdom of Frewyn is being invaded by the Galleisian infantry and at the forefront of the battle is Boudicca MacDaede, a First Captain in the Frewyn armed forces. Her regiment is charged with defending the borders between the two nations, but when Frewyn’s last line of defense falls, Captain MacDaede enlists the assistance of a Haanta, one of giants from the islands to the far north. Promising to free him from his imprisonment in exchange for his help, she gains his trust long enough for them to win the battle and save the Frewyn border from being breached. The giant’s freedom is granted, but Rautu cannot return home unless he redeems himself in the eyes of his people for his past transgressions. He is offered a place by the captain’s side, and together, they defeat the Galleisian forces and become the saviors of Frewyn.

One year later, King Alasdair Brennin takes the Frewyn throne, Boudicca is made commander, Gallei and Frewyn reach an accord, and Rautu is granted an invitation home. He is eager to return and see his brothers but finds it difficult to leave Frewyn without Boudicca at his side. He has become accustomed to her company and the idea of being made to live without her begins to distress him. Rautu invites the commander to the islands in hopes of finding a way for them to remain together, but when they arrive at the white shores of Sanhedhran, not everything goes as planned: one of the dangerous Haanta magi is freed, Rautu’s three brothers are strangely missing, and the neighboring nation of Thellis leads an attack on the islands.

Together, the commander and the Den Asaan Rautu must find a way to unite their two nations and defend against the Thellisian fleets, but can they do so successfully when outside forces are attempting to keep them apart?

So what do you need to do to score a copy of this fantastic novel?  You must be a GFC follower and leave a comment with an email address.
+1 for following Michelle Franklin on goodreads
+1 for adding her books to your TBR shelf

Michelle Franklin is a said...

Thanks for hosting! I hope you enjoy the book!

This book sounds like a good one, and some pretty awesome reviews on goodreads!

Listed Book 1 in the Haanta series as TBR

anddd added to my TBR :)

gfc follower : isabelle frisch ( or miki - sorry i'm not sure how i'm listed)

Hi, Michelle
Thanks for the giveaway.
I tried to follow you on GR but it came up with an error and wouldn't let me so I became a Fan instead. I hope that still counts. +1?
I also added the book onto my TBR list +1
I follow on GFC as MJB and by email.
MJB
msmjb65 AT gmail DOT com