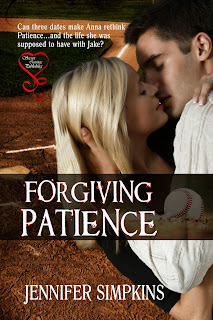 Nikki has been gracious enough to give me free reigns of her home today so I can tell you a little bit about, Forgiving Patience, book one in my new Patience Series, and how it turned into a series.

As writers, we are told to write what we know and love; because it’s a good possibility you will be involved with these characters for the next six months. Well, the small town of , , and all its quirky characters have been a part of my life for the last three years. I haven’t killed any of them yet, so it’s safe to say I love what I write.

As soon as I started Forgiving Patience I knew it was going to turn into a series. I wasn’t sure in what order the books would come in, or who would even get their own story, but I knew once this group of friends became a part of my life, there was no way I would be able to let them go after just one book.

What will you find in Patience, ? You will be welcomed with long-lasting friendships and a close-knit community. Gossip is a part of life, and is shared between friends at Cut & Curls, or sitting in a couple rocking chairs on a front porch, while sipping a glass of sweet tea—the house wine of the south. The quaint town is also filled with a sizzling romance…or two.

In Forgiving Patience (book one), you will be introduced to Jake and Anna. This is a story about second chances and forgiveness. Will Anna find love and forgiveness in Patience, of all places?

Next month, Loving Patience (book two), will be released. In this book you will get to know Liza and Right off the bat, this couple has an instant spark. I had a lot of fun with this couple.

Book three has already been contracted, and will be released this summer. There will be more about this book on my website a little later. J

Anna Kelly had no intention of returning to her hometown of Patience, . At eighteen, feeling powerless from an abusive childhood and heartbroken from her high school sweetheart, she needed to put distance between her and the small town. Now, eleven years later she's invited to her best friend's wedding and has no other choice but to return. Though she feels much stronger the second time around, nothing can prepare her for when she sees her ex again.

After a baseball injury, Jake limped back into Patience, damaged and angry. Throwing himself into remodeling Anna's childhood home has given him purpose again. He is just getting his life back together. He can't risk sending it all back to hell again, but the woman who broke his heart has whipped back into town...and she wants her house back. In hopes of reminding Anna of what she ran away from all those years ago he makes her an offer she can’t refuse—three dates, that have Anna rethinking Patience...and the life she was supposed to have with Jake.

This book was all about healing.  Anna had some really bad experiences in her past that needed closing and both her and Jake had made some really terrible decisions, along with a lot of pain.  It was really hard to say who saved who.  Jake was just as lost as Anna was.  It is amazing to hear how one decision can effect the rest of your life.  This story proves that.  I really enjoyed the book even though it had a few parts that made you tear up.  Both characters went through a lot of emotional growth and learned to let go of past mistakes.  I had a hard time putting this one down.  Both main characters were well written and believable.  Especially Em.  I think everyone knew at least one person in their lives like her.  Hands down Jesse was my favorite character.  I really hope there is a book that includes her in the series.  She was a very interesting character and I would love to know her story.  I would love to read the rest of the series!!  This book was definitely a great intro!!

Now for your chance to win!!  The author is giving away a copy...Just fill out the rafflecopter to win!!!

Hi Jennifer!!! Thanks for the giveaway!!

I love finding new books and authors. This looks like a great book and series.
lauratroxelatyahoodotcom

Thank you so much for sharing about your new book and series. I just read what it was about and I want to read it now!! Thank you for the giveaway.

Congrats Jennifer on the new release! Thanks for sharing! :)

Hi Jennifer. Thanks for the awesome giveaway. Tore923@aol.com

Hi Jennifer. Thanks for the giveaway! What made you write about Tennessee? Are you from there? Is Patience in the Valley, or where?

Muffley,Laura,Crystal,Erin,and Tore thank you so much for stopping by to say hi. I hope you love Anna's story, as well as the rest of the series.:)

Lavendersbluegree, You are very welcome. I love giving gifts! I picked TN because it's were I've always lived. I live in a small town, although it's grown a whole lot since I was a child. I did use some pieces of my hometown as inspiration, but Patience still has that southern charm about it. While other small towns are growing in population and putting in the large supermarkets, Patience sticks to the slower pace of living. It's also more in Middle TN.

Thanks again for stopping by, and I hope you enjoy your time in Patience. :)

Hi Jennifer. Forgiving Patience sounds great and I absolutely loved the excerpt. Thanks for the giveaway!

Hello, I love these kinds of stories with a second chance and a small town.

Forgiving Patience sounds fantastic. Can't wait to read it. Thanks for the great guest post, excerpt, and giveaway.

Heather, Kelly, and Joanne, thank you guys so much for stopping by. I'm glad you like the excerpt. I hope you enjoy the book. :)

HI. Nice post and great excerpt.Going on the TBR Pile for sure.

Great excerpt, Jennifer! This sounds like a real heart-tugger and I love that they might be each other's balm!

Oh, thank you, Divavixenqueen. I really hope you enjoy it. Anna's story was at times hard for me to write b/c of all the emotion, but I love strong heroines, and Anna is the pure definiton of that.

Great excerpt Jennifer and thanks for sharing and giveaway, I want to read this!!