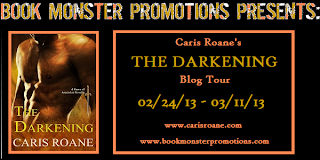 Hey, all!  I’m so happy to be back here at CLOSE ENCOUNTERS WITH THE NIGHT KIND!!!

I’m a paranormal romance author who lives in the desert Southwest, the Sonoran desert to be exact and just to torment an entire host of you, we have wonderful weather this time of year, especially moving into March.  We’ll be in the 70’s and by the end of March, the 80s, which means this is the time of year to come to Phoenix, soak up some sun, swim in the pool.  Of course, turnabout is fair play, and by the end of May we’ll hit 105 and never look back.  Our summers are long, long, long.  We don’t break out of triple digits until mid-October, so allow me to rejoice for a few minutes then come August you can laugh at me as much as you like!

The last time I was here, I was promoting GATES OF RAPTURE, the sixth installment of my Guardians of Ascension series, you know, the one about winged warrior vampires?!  Yep, you heard it right, my vampires have wings, a twist on the whole bat-vampire thing…a bit of a stretch, but I’ve had a blast writing vampires in flight…and let me tell you those wings are SEXY!  Today, I’m offering up the next chapter, a novella called THE DARKENING, that takes place 1 month after events in GATES OF RAPTURE.

For the most part, I’ve set my Guardians of Ascension series here in the Sonoran desert, although occasionally I send my teleporting vampires around the world in a type of travel I call folding.  I took that expression from the novel DUNE, which uses the concept of ‘folding space’ as a means of travel. In my vampire world, scientists can’t prove whether vampires actually dematerialize or ‘fold space’.  And yes, it’s really fun to be a writer and make stuff up!

THE DARKENING follows hunky Militia Warrior Samuel, and his breh, or vampire bond-mate, Vela, as love takes them on a roller-coaster ride!  Samuel must come to terms with the dark power that invaded his life during a decade of torture and captivity and Vela must figure out what to do with her new power that takes her straight into a phenomenon called, you guessed it, THE DARKENING!

Guardians of Ascension is an epic world of multiple dimensions in which the ascending process between dimensions involves hot, hot, hot vampire romance and an array of emerging powers.  Second Earth sees the transformation of the ordinary human into a vampire, who eventually mounts wings!

The following excerpt comes from the first chapter of  THE DARKENING.  Samuel has just saved Warrior Santiago from certain death by helping him battle a large force of death vampires near the Superstition Mountains.  Samuel has released his dark power and fought like a warrior-god…

“Samuel? Is that you, hermano?”
He heard his name and spun in Santiago’s direction. A metallic smell coated the dusty desert air.
The famous warrior looked at ease, wiping his blade down with a cloth he’d folded into his hand. His sword had a ruby set in the center of the cross-guard.
“Fuck,” Samuel spit. He’d meant to get the hell out of there before Santiago took stock of him, but the battle had kicked his fighting rage into high gear and all he could think about was being ready for the next round.
Santiago drew his thin warrior phone into his hand and called for clean-up. When he ended the call, he said, “Close your eyes.”
Samuel dropped his lids and a flash told him that Jeannie had orchestrated a full scale removal of disconnected debris including corpses, body parts, and blood. The process took only a couple of seconds, so yes, Central had power. He popped his eyes open and here was one miracle of their world, that they now had technology to leave a pristine desert behind after a battle.
“When were you going to show Luken this power of yours? Or Jean-Pierre? Right now I’m not sure which brother will be more angry with you.” Santiago still had a Spanish accent, even after several centuries, something that tended to stick for all ascenders, depending on place of birth. Santiago was from Mortal Earth Spain a few hundred years ago.
“Never.” Samuel’s voice sounded rougher than usual. His power had that effect.
He turned, ready to fold someplace else, away from the battle site in order to resume his natural state, but back-up had finally arrived.
Luken, the leader of the Warriors of the Blood, stood beside Jean-Pierre and both men glared at him.
“I’m not doing this,” Samuel said, meeting Luken’s gaze dead on. “You can’t have this ability for your Warrior of the Blood shit.”

BIO:  Caris Roane has published nine paranormal novels and novellas and writing as Valerie King, fifty Regency works.  In 2005, Romantic Times gave her a Career Achievement award in Regency Romance.  As Caris Roane, she currently writes paranormal romance for St. Martin’s Press and also self-publishes the continuing stories for her Guardians of Ascension series as well as stories set in other worlds. 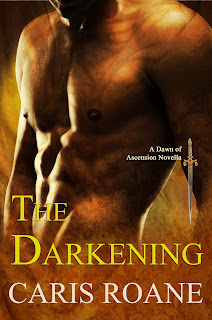 THE DARKENING, by Caris Roane
A novella of the Guardians of Ascension
49,800 words plus Ascension Terminology

A tortured warrior and a peace-loving counselor battle to protect Second Earth against a powerful dark force…
He thwarted connection of any kind…
Fearing that his newly emerged grayle power will kill innocent ascenders, Samuel Daman struggles to keep his distance from beautiful Vela Stillwell.  But the breh-hedden has struck and her light floral scent tears at his restraint.  When the enemy draws them both into the darkening, a place of secret travel for Third ascenders, will Samuel learn to control his power, or will he destroy what he desires most?
She hid from grief…
Vela Stillwell wanted a new life, away from Militia Headquarters, away from the reminder of all she’d lost when her husband died five years earlier.  Seeking a more reclusive occupation, she finishes her last day of work only to have Samuel Daman and the infamous breh-hedden sweep through her life.  Though trying to disconnect from her new emerging power and from Samuel, the call of the darkening pulls Vela into an adventure that both terrifies her, yet reveals the truth about her deepest desires.  Will she succumb to the breh-hedden, or will her fears prevent her from living life to the fullest?

Caris has offered one lucky subscriber an e-book copy of The Darkening!!  Enter below!!

One lucky winner will receive:

Hi, everyone,
Just thought I'd drop by and say hello! Hope you enjoyed the excerpt!

Thank you so much for the chance!!

Would love to win a copy of this book, have been really excited about this author's latest release. sdylion(at)gmail(dot)com

Good luck to everyone!

Keep following the tour for more chances at that e-copy! http://www.carisroane.com/the-darkening-tour-2-24-13/

I can not wait to read this book. Looks like a great read. Thank you for sharing!!

Loved the excerpt! Thanks for the contest.

This series just sounds wonderful! I loved the excerpt! The cover is beautiful too...*S*
thank you for the giveaway, and I've added the series to my gotta have list...*S*

Hi Caris! I have been fiending for The Guardians of Ascension series for some time now. With the 6th book released recently, I have some catching up to do. Thanks for stopping by and sharing. Love the excerpt and thanks for the giveaway!

Waving - Hi Caris! Thank you for sharing with us today. I am looking forward to reading Samuel and Vela's story :)

This sounds like a wonderful book...definitely this series is one I need to check out! Thanks for the great excerpt and giveaway chance!

Hello Caris! This sounds like an interesting story. Thank you for the giveaway chance.

Congrats on the release!!