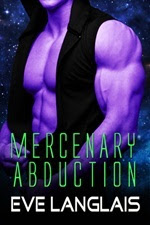 Makl is looking to become the greatest mercenary the universe has known. In true family tradition, he leaves a trail of mayhem and bodies wherever he goes. steals the most priceless of items, ravishes females left and right. But that all ends the day he comes across the biggest prize of all – a human barbarian.

Fooled into thinking her a priceless virgin and captivated by her pale skinned, two-breasted frame, he abducts her, or at least means to. His plan goes somewhat awry. The not-so-innocent human becomes his partner in crime instead of his prisoner, and together they form an unstoppable duo. Tales of their misdeeds and budding passion become a universal sensation, but there’s no room in a mercenary’s life for a mate. Or is there?

For the first time in his life, the Mercenary’s Guide to Prosperity doesn’t have an answer to Makl’s questions, and there’s no visible threat for him to kill. What’s a poor, purple mercenary to do? Admit he’s in love – or ditch the delectable human?

Warning: This story contains a hot purple alien. Probing is to be expected!!!!

I went into this book with no previous experience with this series, but with a WHOLE lot of love for her others.   I think I have actually found a new favorite in one lovable, purple, arrogant, and dangerously sexy alien.  Makl is everything an alpha should be and comes in one of my favorite colors.  What could be more awesome then that?  We start off with one super-arrogant mercenary, hard-core trained, and dying to stand out from the rest of the family.  He lives and breaths by his Mercenary's Handbook but defiantly meets his match in one innocently trussed up human woman that looks to need rescuing.  But when the tables are turned on this cocky, yet adorably sexy mercenary, he vows to have his revenge.  He is unprepared for the journey that this leads him on and how much he stands to loose......or gain.

I have to admit, I fell a little in love Makl myself when he was on his quest to figuring out his feelings for Oliva.  You actually get to witness the fall of this loner male and at times it is literally laugh out loud funny.  The dialogue between the two is witty, and its easy to see from the beginning they belong together.  I even teared up at the end...and I won't tell you why!!!  This was a fun little jaunt into the Mercenary's realm.  I really want to go back and read the the first 3 books!  If the other purple hotties are anything like Makl, I know the series is definitely going to rock it.  I haven't read any of this series and had no problem following along!  And Murphy and Karma in this book? Loved the concept!!  This author truly has a way of sculpting an incredibly entertaining read that will have you wrapped up and wishing it would never end!!  Excellent Read with some definite HOT sex scenes!!

Oh, that's kind of new, an intergalactic Bonnie and Clyde.

Well now. How did I miss this series?! I love Eve's books! Hot men are my thing and purple is my favorite color so I can't imagine why this wouldn't be a hot read...your review makes me KNOW this is gonna be a book I've GOTTA read!!

Hmmm. I have never seen these before. Sounds yummy, mmm purple....

Oh,Nikki! You have to read the other books in this series.They are all great, I can never get enough of the sexy purple aliens ;)

This is a new series for me but I look forward to reading.

I've loved the others in the series. can't wait to read this one. Great post.

I love Eve Langlais and her books! I am impatiently waiting for the release of this book.

I love Eves books and have only gotten to read 3 so far but she is fantastic!

I manage to intrigue me with actually not giving away too much details.

Thanks,
Adila (from Azerbaijan)

Great review. I love this series.