Happy Halloween my dirty little trick-or-treaters!!  I have a surprise for you!!  Today with us we have a special giveaway of Paradise 21!  Take a sneak peek! 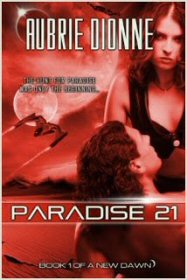 Title: Paradise 21
Author: Aubrie Dionne
Genre: Sci-Fi Romance
Length: Novel
Release Date: August 2011
ePub ISBN: 978-1-937044-02-2
Mobi ISBN: Coming soon!
Print ISBN: 978-1-937044-03-9
http://www.entangledpublishing.com/paradise-21/
Book Blurb:
Aries has lived her entire life aboard mankind’s last hope, the New Dawn, a spaceship traveling toward a planet where humanity can begin anew—a planet that won’t be reached in Aries’ lifetime. As one of the last genetically desirable women in the universe, she must marry her designated genetic match and produce the next generation for this centuries-long voyage.
But Aries has other plans.
When her desperate escape from the New Dawn strands her on a desert planet, Aries discovers the rumors about pirates—humans who escaped Earth before its demise—are true. Handsome, genetically imperfect Striker possesses the freedom Aries envies, and the two connect on a level she never thought possible. But pursued by her match from above and hunted by the planet’s native inhabitants, Aries quickly learns her freedom will come at a hefty price.
The life of the man she loves.
Excerpt:
“Might as well stay here and make camp for the night.”
His casual tone stung her composure. How could he talk of such mundane things when they’d almost been captured, when she’d touched him so tenderly?
“We’ll let them get farther away,” Striker explained, reasonable as always. “We’re going in their direction tomorrow.”
The sting of rejection grew, burning a hole in her heart. “Why?”
“Why what?”
Her lips trembled. “Why not kiss me like you did before?”
“I can’t.” He shook his head, and the air cooled between them; so much so, Aries wondered if the desert had turned into deep space.
He’d teased her with such affection before, it was cruel to take it away. “I don’t understand,” she said, wishing she didn’t care, wishing she could stop all the emotions he’d started in her heart.
Aries caught a glimpse of pain etched in the wrinkles around his eyes. Striker turned away and started pulling supplies out of his backpack. “I can’t do this.”
“Do what?”
Striker shook his head and Aries prompted, “Can’t kiss me, can’t trust me? What?”
“I can’t allow myself to get tangled up with someone. Not again.”
The thoughts of Striker with another woman confused her. On the New Dawn, everyone had one lifemate and that was it. “You mean you loved someone before?”
Striker’s hand tightened on the backpack. “I trusted someone a long time ago, allowed myself to love, if you will. She hurt me so much I lost my entire life and ended up here. I can’t experience that kind of pain again.”
Aries clasped her hand over her heart. “I’m so sorry.”
He waved her apology off as if it meant nothing. “It’s a tough world, Aries. And it’s dangerous to love. If I were you, I’d keep my heart well-guarded, because you never know when it will affect your decisions, when it will make you weak.”
Aries couldn’t take his advice. Watching him talk about his past made her realize she’d already given up her heart.
Sounds great?  You know the drill!!  Just comment below for your chance to win a copy!!  You must be a GFC follower!

Poor Aries, all she wants is a kiss!
My guess is she eventually gets it!
Sounds like a great book! Little action, little romance, stalked by a wanna be match!
Count me in!

seems interesting ( we got the print book?)

I'm quite curious about this book, the excerpt sounded interesting.

quite an intriguing book to me. :) i'm interested
email: cruz042@csusm dot edu

Ok.2nd time.Blogger ate the first one!
I said that this looks really interesting and I'd love to win it and read it!
I do well with giveaway on your blog, so fingers crossed!
MJB
msmjb65 AT gmai DOT com

Sounds great! Thanks for the giveaway!

I want to read this book SO bad!! Especially after reading that excerpt! Thanks so much for the chance to win a copy:)